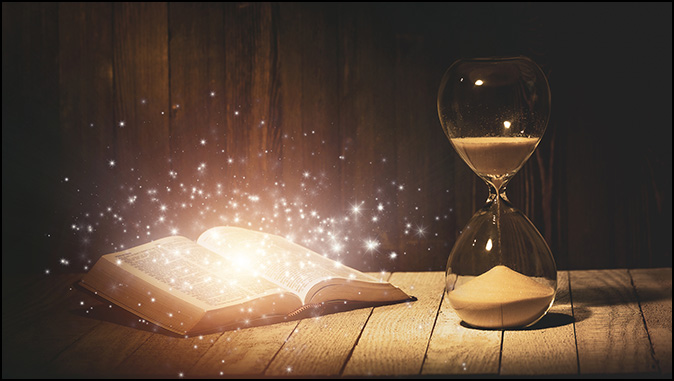 A Chronology Of End Times Events
By Jack Kelley

More and more as we get closer to the end, people want to see a time line of coming events. Questions about the order in which events will take place, the span of time between them and the likelihood of there being enough time for everything to happen in the time we have left are becoming more numerous with each passing week.

As you know the Bible doesn’t provide this level of specificity. But neither are we left to make unfounded predictions. There are a number of clues scattered throughout the New Testament that take much of the guess work out of things. With diligent study, we can put them together and make some pretty reasonable assumptions.

For example Romans 11:25 says Israel has experienced a hardening in part until the full number of Gentiles has come in. I’ve shown several times how the phrases “full number” and “come in” point to the Rapture of the Church. In Paul’s day they were often used in a nautical context. The “full number” was the number of crew members a ship needed before it was authorized to set sail. As soon as the full number of crewmen had been contracted the ship immediately left the harbor to begin its journey.

The phrase “come in” means to arrive at the ship’s scheduled destination. It’s still in use today. People talk about how different life will be for them when their ship “comes in”.

From Romans 11:25 we get the notion that the Church has a full number, too. That’s the number of believers necessary for the rapture. Reaching that number frees us from the constraints of this world and we’ll immediately “come in” to our scheduled destination, Heaven.

Ezekiel said that one outcome of the battle he described in chapters 38-39 is that Israel will be awakened to His presence (Ezekiel 39:22). Since Paul said Israel’s awakening will follow the rapture and Ezekiel said it will be an outcome of his battle, we can assume the rapture will likely precede Ezekiel 38.

None of Israel’s current next door neighbors are mentioned by Ezekiel, even though they’re all antagonists, but the prophecies of Isaiah 17 and Psalm 83 feature them prominently. From this we can conclude these prophecies will be fulfilled ahead of Ezekiel 38 but there’s no way to tell if they will also take place before the rapture.

A set of parallel clues can bring us to the same conclusion about the relationship between Ezekiel 38 and the rapture. In Acts 15:13-18 James said that Israel was being set aside so the Lord could take out of the Gentiles a people for himself, after which David’s fallen Tabernacle would be rebuilt. The phrase “take out” comes from a Greek word that means to take hold of something for the purpose of carrying it away. It refers to the rapture of the Church.

David’s fallen Tabernacle is the Temple which was destroyed in 70 AD and will be restored. But there won’t be any need for a Temple until Israel is back in an Old Covenant relationship with God. And this will only happen after the Battle of Ezekiel 38. Being back in an Old Covenant relationship means Daniel’s 70th Week will have begun (Daniel 9:27). That means the Age of Grace will have come to an end and the Church will be gone.

That’s as much of a hint as to timing the Bibles gives us. But remember Psalm 83, Isaiah 17 and Ezekiel 38 are all called battles, not wars. If Israel acted without restraint Psalm 83 would likely require only a week or so to fulfill. Isaiah 17 involves only the firing of a missile or the dropping of a bomb. The Rapture of the Church will happen in the twinkling of an eye. God could annihilate the forces of Ezekiel 38 in an afternoon. My point is, this is not too much for Him to accomplish in the time that’s left.

The way the Middle East keeps heating up it’s possible the fulfillment of Psalm 83 and Isaiah 17 could happen very soon. But sad to say it’s not if these two prophecies will be fulfilled but when. And from Scripture you can’t tell if they’ll happen before or after the Rapture. They could all happen at once.

But after they do, the Battle of Ezekiel 38 will follow, Israel’s awakening being necessary for Daniel’s 70th Week to begin. This will bring the anti-Christ to the forefront to confirm the treaty that allows for a Temple to be built. In the middle of the 70th Week he’ll claim to be God, kicking off the Great Tribulation, after which the Lord will return to establish His Kingdom.

Over the past few weeks we’ve taken a fresh look at Psalm 83, Isaiah 17, and Ezekiel 38-39. We’ve also shown why the re-birth of Israel has to be the premier sign of the End of the Age. Hopefully, this perspective on how all these prophecies are related will provide the overview we need to understand how very close we are to the End of the Age. Even angels have longed to look into these things (1 Peter 1:12) but you and I are blessed to experience them firsthand. You can almost hear the foot steps of the Messiah.

Will An Economic Pearl Harbor Destroy America? By Britt Gillette On December 7, 1941, Japan…

The Left’s Meltdown Over Elon Musk’s Purchase of Twitter

The Strategic Petroleum Reserve Has Become a Joke