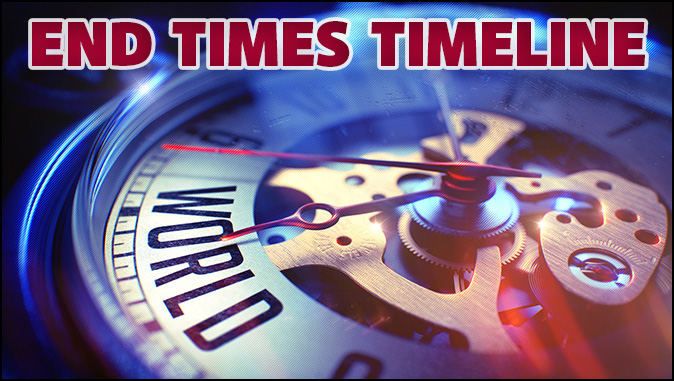 One of the most often asked questions in Bible prophecy is “What is going to happen next?” as it relates to the end times and last days. While there is considerable debate among prophecy teachers, we will attempt to give a scriptural interpretation of the sequence of end times events as they relate to Bible prophecy.

Note: I am not a prophet and it is likely that this timeline will not happen EXACTLY as I have outlined below, but I have put forth a good effort to be as accurate as I can by studying God’s Word.

Here’s how I tend to see events unfolding during the end times:

1. World Wars I and II – Matthew 24:1-8
In our view, WW1 and WW2 are considered part of the end times events as they are referenced in the Book of Matthew. The world wars are referred to as “nation shall rise against nation, and kingdom against kingdom”. While this might sound like a typical description of war, Dr. Arnold Fruchtenbaum notes that in the context of Jesus’ day that this was a common Jewish idiom for “world wars”. As we know, WW2 was considered by many historical authorities as simply a continuation of WW1. The significance of WW2 for Bible prophecy is that it provided the motivation for the Jews to re-establish a state for themselves fulfilling the prophecies of Ezekiel 20.

2. The Re-Birth of Israel – Ezekiel 20:33-38; 22:17-22; Zephaniah 2:1-2
As mention in event #1 WW2 served as the motivation for the Jewish return to their ancient homeland exactly as the Bible described in Ezekiel 20. Israel must also be in the ancient homeland so that many other prophecies can be fulfilled and today we can see the modern miracle of Israel. No other nation in the world has been essentially erased from the world map only to be “reborn” hundreds if not thousands of years later. But the Bible made this astonishing prediction long before it happened.

4. Israel destroys surrounding enemies and reaches temporary “peace and safety” setting up Gog/Magog invasion – Psalm 83
Stalemates in the Middle East peace process and other influences result in the fulfillment of the ancient prophecies in Psalm 83. Israel is forced to deal with the modern day terrorists and “Palestinians” who refuse to make peace with her. Jerusalem becomes an object of contention.

5. The Russian (Gog/Magog) Invasion of Israel – Ezekiel 38:1-39:16
The “Gog/Magog” war is another name for the Russian led invasion of Israel in the end times. The Bible predicted that Russia followed by her islamic allies will attempt to come from the north parts for a “spoil” but are soundly defeated when God suddenly intervenes for Israel. God states in Ezekiel 38-39 that he intervenes in order to sanctify his Holy name and as a result saves Israel from what would be certain destruction.

6. The One-World Government – Daniel 7:23
In Daniel 7:23 we are given the exact sequence of the next three prophetic events in chronological order. Many people have missed this and as a result have misplaced other end times events. But the scriptures are clear that as a result of the defeat of Russia and her Islamic allies in Ezekiel 38-39, a power vacuum will exist that will provide the perfect opportunity for the rise of a one world government.

7. The Ten Kingdoms – Daniel 7:24
After the formation of a one world government, the Bible is clear that the world government will split into ten “kingdoms” or regions. There are numerous high profile groups like the “Club of Rome” who have already broken the world down into ten regions. With the rise of the European Union, African Union, etc. we are slowly but surely seeing the prophetic puzzle pieces move into place for this prophecy to be fulfilled.

9. A Period of Peace and False Security – 1 Thessalonians 5:1-3
The period of false peace will come upon to the world as the one world government and Antichrist arrive onto the world stage. The period of false peace and safety is used in I Thessalonians in reference to happening before the “Day of the Lord” which refers to the Tribulation period or the 70th week of Daniel.

11. The Abomination of Desolation – Daniel 9:27; 2 Thes. 2:4; Matt. 24:15-16
This event takes place at the middle of the Tribulation period when the Antichrist stands in the newly rebuilt Third Temple and proclaims that he is God on earth. This is the event in which Israel is specifically warned about and that when they see it happen to flee to the hills. This is the official “revealing” of the Antichrist to the Jews and they will then see that they have been deceived by the “man of sin” who they looked up to and who now will persecute them.

12. Armageddon – Revelation 19
The campaign of Armageddon is the event where the Lord Jesus returns to earth and makes his way from Bozrah to the valley of Jehoshaphat where he defeats the armies of his enemies.

13. The Second Coming – Revelation 19
The Second Coming of Jesus Christ will occur at the end of the Tribulation period. Israel will finally mourn for the one that they pierced and they will accept him as the Messiah.

14. The Millennium Kingdom – Revelation 20
The Millennium kingdom is the 1,000 year period of peace and prosperity where the Lord rules from Jerusalem with an iron rod. Satan and his evil sidekicks the Antichrist and False prophet will be confined and the earth will be renovated.