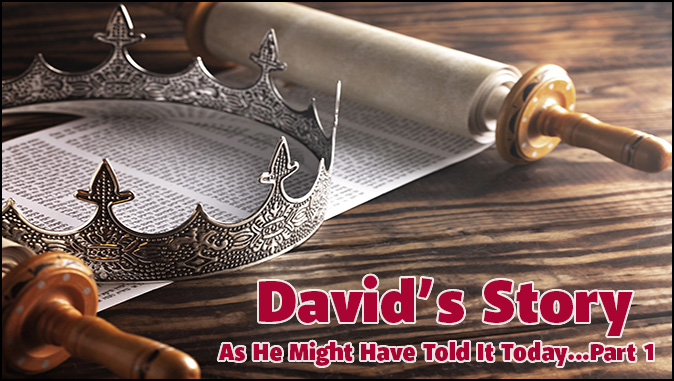 Obed was the father of my father Jesse, so Boaz and Ruth were my great-grandparents. My name is David, a former shepherd boy from Bethlehem who became Israel’s greatest King.

After forty years in the wilderness, the Israelites finally crossed the Jordan to begin their conquest of the Promised Land. Joshua sent two spies into nearby Jericho to see what the place looked like from the inside, but they were spotted and the King of Jericho sent soldiers to capture them. Rahab, a resident of Jericho, offered to hide the Jewish spies from the King’s men, and in return, they agreed to save her and her family from the coming destruction.

After the massive city walls suddenly came crashing down in a tremendous display of God’s power, Jericho was defeated. As promised, Rahab was spared and joined the Israelites, having earlier proclaimed her faith in God. Later she married an Israelite named Salmon and they had a son, Boaz. Boaz became a prominent man around Bethlehem and eventually married Ruth, a Moabite princess who had come to live there with Naomi, his widowed sister-in-law. Their son Obed was the father of my father Jesse, so Boaz and Ruth were my great-grandparents. My name is David, a former shepherd boy from Bethlehem who became Israel’s greatest King.

One day when I was barely into my teens and out tending our family’s sheep, the great prophet Samuel arrived at our home. He had come to anoint one of my father Jesse’s eight sons as Israel’s next king because the Lord was fed up with Saul’s disobedience.

The Lord hadn’t told Samuel which of us He’d chosen, only to show up and follow instructions. After inviting my father and brothers to join with him in sacrificing a heifer to the Lord, Samuel started toward my oldest brother Eliab, thinking that since he looked the part he was probably the Lord’s choice.

But the Lord told him He wasn’t interested in physical appearance alone, but the motive of a man’s heart, and had Samuel reject him. He did the same to all my other brothers as well. Finally, Samuel asked my father if he had any more sons.

“There is still the youngest,” my father replied, referring to me, “But he’s tending the sheep.”

Samuel said, “Send for him.”

When I was brought in, the Lord told Samuel, “Rise and anoint him; he’s the one.”

So Samuel opened the horn of oil he had brought and used some to anoint me in the presence of my father and brothers, and from that day on I felt the power of the Spirit of the Lord upon me.

Later, when the Lord withdrew His anointing from Saul, an evil spirit came to take its place. Saul’s advisors suggested that someone who could play soothing music on a harp would help him get through his periods of torment. One of them mentioned that he had heard me play and thought I could do the job. So once again I was called away from our family’s sheep. My father put me on a donkey, gave me some food and drink and sent me off to report to Saul.

Saul liked my playing, so he made me one of his armor-bearers and asked my father to let me stay with him. From then on, whenever Saul was being tormented I would play for him. My playing gave Saul relief and made him feel better, and the evil spirit would leave.

Several years later we got word that our enemies, the Philistines, were gathering for war. They’d given us trouble before, so Saul knew to get the Israelite army together for a big battle. The two armies wound up on opposite hillsides separated by the Valley of Elah, about 15 miles west of Bethlehem. It was there that the battle would take place.

The Philistines had adopted the strategy of having champions decide the outcome of their battles. It went like this. One man from each army would come to the center of the battlefield, where they would fight each other. Whichever man won would achieve the victory for the army he represented. The army of the loser would suffer the defeat and become subject to the winners. So the Philistines sent a giant of a man, Goliath was his name, to challenge the Israelites. He was huge! Over nine feet tall and possessed of incredible strength. The Israelites were so intimidated that they sat there cowering for 40 days while Goliath came out to taunt them every morning. Even the promise that they would be given great wealth, marry the King’s daughter, and have their family exempted from paying taxes wasn’t sufficient incentive for anyone to risk their lives against this monster.

I had left Saul’s service and returned home, but when my three oldest brothers joined the army to fight the Philistines, I sometimes came to the camp to bring them food. One morning I arrived in time to hear Goliath’s daily taunt. I was appalled!

“Who is this uncircumcised Philistine that he should defy the armies of the Living God?” I demanded. My oldest brother lit into me for that one, telling me to be quiet and accusing me of shirking my duties to come and watch the battle. I think that he, like the others, was embarrassed by the taunts of Goliath. And even though I had been anointed as Israel’s next King, I was still his kid brother.

I went off and talked to others and soon word of my comments came to Saul, and he had me brought to him. Because it had been several years, Saul didn’t recognize me as the boy who had played the harp for him, and I didn’t remind him.

“Let no one lose heart on account of this Philistine,” I told Saul, “I’ll go out and fight him.”

“You’re just a boy, and this giant has been a warrior since his youth,” Saul replied, “You can’t go out and fight him.”

“I’ve saved my father’s sheep from a lion and a bear,” I said, ” and when they turned on me, I killed them both. The Lord, Who protected me from them will protect me from this Philistine.”

And so Saul relented and gave me permission to go.

Now before you accuse me of an excessive dose of youthful bravado, consider this. The Lord had sent Samuel to anoint me as Israel’s next king. Then he empowered me to kill a lion and a bear, showing me that he wouldn’t let anything happen to me before His promise came true.

Plus, Goliath was offending the Lord by taunting His army. Someone had to give that monster his due. Who better than one who couldn’t be harmed?

Saul had me try on his armor, but since he stood a head taller than most grown men, and with me just a teenager, it was too big and heavy for me to maneuver in. Finally, I took it off and went out with just my staff, my sling and five stones I had picked up in a nearby brook.

When Goliath saw me, he laughed at first then became angry that a boy had come to challenge him. It was an insult to his prowess as a warrior, and he threatened me and cursed me in the name of his gods.

I shouted back, “You come against me with sword and spear and javelin, but I come against you in the name of the Lord Almighty, the God of the armies of Israel, whom you have defied. This day the Lord will hand you over to me, and I’ll strike you down and cut off your head. Today I will give the carcasses of the Philistine army to the birds of the air and the beasts of the earth, and the whole world will know that there is a God in Israel. All those gathered here will know that it is not by sword or spear that the Lord saves; for the battle is the Lord’s, and he will give all of you into our hands.”

I put a stone in my sling and ran toward him letting it fly with all my strength. It struck him between the eyes and sunk clear into his brain killing him instantly. Then I used his own sword to cut off his head and held it aloft for all to see. Whatever bravery the Philistine army previously had vanished in a flash and they took off headlong, some toward Gath, and others toward Ekron, the nearest fortified cities. Saul’s army chased them all the way and the road was strewn with their dead bodies. And so the Israelites defeated the Philistines in the Valley of Elah.

You know, in many ways you’re a lot like me. The Lord has set his seal of ownership on you and anointed you with His Holy Spirit. You too are destined to become a king, and no enemy can take your life before that time. Like me, you’ll have many battles along the way but no matter how big and powerful your attackers are, the Lord is bigger and in His strength, you will defeat them all.

Next time you’re in one of those battles, remember this. Saul’s entire army cowered before Goliath, but a shepherd boy brought him down with one small stone. Saul’s army represents you in your own strength, Goliath stands for Satan, and I was there as a model of the Holy Spirit. People at their strongest are woefully outclassed in a spiritual battle with Satan and can only cower before him in fear. But when the Holy Spirit takes charge, it becomes like child’s play. As the Apostle John would one day write, “The One who is in you is greater than the one who is in the world.” (1 John 4:4)

Well, we’re just getting started with the story of my life, so I hope you’ll join me again next time. Shalom.