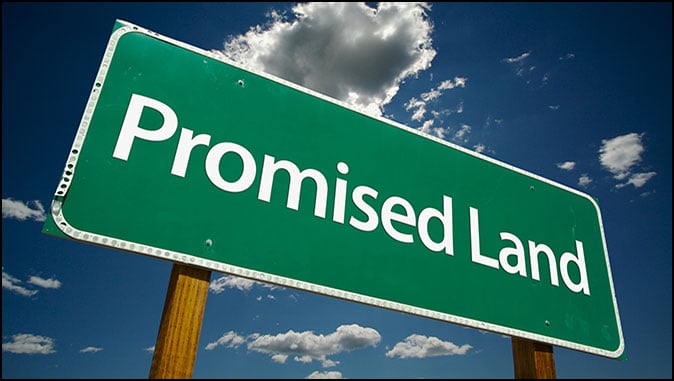 But as he returned to their camp in Kadesh with the other eleven scouts, his ears must have deceived him. The words he heard spoken did not match what his eyes had seen. As he heard ten of the other scouts speak, he heard a reaction he would have never fathomed. The report they gave was not one of promise and fulfillment, but one of fear. He heard the ten scouts say, “We entered the land you sent us to explore, and it is indeed a bountiful country–a land flowing with milk and honey. Here is the kind of fruit it produces. But the people living there are powerful, and their towns are large and fortified.” (Numbers 13:27-28). Caleb saw the reaction of the people as they heard the scouts speak, and he tried to encourage the crowd, calling on them to take the land at once. But before he could even finish, the fear of the scouts could be heard again. “We even saw giants there, the descendants of Anak. Next to them we felt like grasshoppers, and that’s what they thought, too!” (Numbers 13:33).

Caleb’s words were never heard, all the people could hear were the words of fear. Caleb could hear the mumbling and cries of the crowd. Cries that questioned God, and only feed into the growing fears. As Caleb heard these words, he rebuked the crowds with another faithful scout, one we know as Joshua. They tore their clothes and called out to the people, “The land we traveled through and explored is a wonderful land! And if the LORD is pleased with us, he will bring us safely into that land and give it to us. It is a rich land flowing with milk and honey. Do not rebel against the LORD, and don’t be afraid of the people of the land. They are only helpless prey to us! They have no protection, but the LORD is with us! Don’t be afraid of them!” (Numbers 14:7-9). But the people had been filled with doubt and fear, and could only envision what their eyes would show them, not the vision the Lord had in mind for them.

The doubts of the people brought on themselves more than just fear. Their doubts would cost a whole generation from ever seeing the promise the Lord had made them, the beauty and amazement He had waiting for them. For forty years they would now wander, wandering aimlessly in the desert while the doubts of this generation passed. Forty years wasted because of their doubts and fears. Forty years for this sinful generation to pass, so another faithful generation could rise up. A future generation, that would not share in their parents doubts and fears, who would trust the Lord’s vision more than their own. Of all the men and women who heard the scouts speak that day, only two would ever see the beauty of the land the Lord had waiting for them. Would ever taste the promised milk and honey. Only Caleb and Joshua, would set their feet in the land, and see the promises the Lord had made them come to life.

As they approached the Promised Land, God had assured them of victory. The land that stood in front of them was already theirs, all they had to do was trust God and take it. All the miracles they had seen, should have assured them that God would never lead them to a place where His power could not provide for them, and His hand could not protect them. But like so many of us, His people walked by sight, not by faith. Hearing only words of fear, not the words of promise. Words of doubt, that lead them to forget each word of praise.

As I look to what we refer to as the Church in this nation, I see the eyes of those in the Wilderness staring back at me. I hear their words of doubt and fear in the mumbling of their voices. I hear the cries of panic, as they are told of the giants that stand in front of them. And I hear the denial in their sounds of anguish, as the Lord seeks to lead them. A people with a greater fear of the giants of this world, than a love for the Lord above.

Look at where this fear has led us. And look closely at where this fear will lead us. This fear has led us to silence and compromise, with a Church that finds it easier to appease this world than to tell this world the truth the Lord has taught us. A fear, that has left us sitting quietly, as we watch the moral structure of this great nation collapsing around us. And a fear, that in our quiet, has left us afraid to even speak the truth of God amongst ourselves.

A few years ago, a noted research group did a survey of the Church. In this survey, regular churchgoing people were asked if goods works can get us into Heaven. When the results of this poll were published, it astonished many of us in the ministry. Over fifty percent, of regular churchgoers, believed they can earn their way to salvation. Over fifty percent! Over half of those sitting beside you in the pews think they can do enough good in their life to be able to stand in the presence of our Lord. Over fifty percent do not understand why Christ gave His life, and why He even came to this earth in the first place. As this Church sits in our quietness, think about that for a minute.

As I said, this poll was taken several years ago. What would the results be if it was taken again today? What percentage of churchgoers would now believe they could do enough good works to get into Heaven? How many that sit in our churches each Sunday, would say today that they do not need to accept Christ to receive eternal life? And I would even ask the question, why has this poll not been taken again in the years since? Sadly, I think I can answer that question. Because we do not want to know the results.

We, the Church, are a people wandering in the Wilderness. A people that sees themselves as grasshoppers, and the absent-minded morals of this world as giants. And as we look around through the quietness of our fears, there is one thing we do not see. The one thing we need to see the most. The one vision that can overcome our fears, and give us a voice at a time when our silence is destroying us. That one thing we do not see? The only “One” thing that matters. God!

Stand up Church, and listen closely to the words of Joshua and Caleb! Ignore the fears and panic of the other scouts! It is time we rose to our feet, found a strength in our voice, and stood for God when others may not. And in doing so we can take assurance in knowing, that God will bless us in ways that we could never begin to imagine. And He will extend that blessing to future generations, and bless them in ways we would find nothing short of amazing.

We must gain our voice again and remember that in the face of the reality that surrounds us, there is an even greater hope found in us. There is a crisis in our world. There is a crisis in our families. There is a crisis in our morality. There is a crisis in our government. Integrity has been shoved aside, and left on the ground for dead. We look all around us, and all we can see are the giants this world is sending at us. But as you look into the eyes of the giants approaching you, do not see fear, see opportunity! The opportunity to rid this world of an evil that haunts it, but an evil that can never control it. Stand up, and get yourself ready to enter in this fight. Put on the full armor that God has given you. Sharpen the sword of truth that He has placed in your hand. And as you get ready to place the armor on your body, remember to first put on the lining. A lining of prayer that makes you impenetrable. Stand up with confidence, and prepare yourself for the battle that awaits you. And as you walk forward into this battle, know it will be a short and victorious one. As the Lord has made you into a mighty giant slayer!

People, if there has ever been a time this world needs the Church it is now. Christians who care about hurting people, Christians who will reach out to a confused and lost world, Those of faith, who will preach the awesome and simple message of the Bible without compromise. Now is not the time for us to retreat, but to follow God into the Promised Land. A time when the giants we see do not bring fear and intimidation to us. In our eyes they must be seen as nothing but obstacles we can easily overcome because of the blessings the Lord has awaiting us. And as the Lord leads us into the fulfillment of these promises, we must never forget, our God specializes in bring giants to their knees!

Remember, and never forget what we are fighting for. Our fight is for far more than just a conquest today, but for an eternal victory we will all celebrate tomorrow. Our battle may take place in the midst of this world, but in our victory this world has nothing to offer us. How foolish would we be to place all our hopes in a world that is quickly passing, a world that will one day to be gone. Jesus told us, “What does it profit a man if he gains the whole world, and loses his soul?” (Mark 8:36). This is not a battle for the riches this world has to offer, or for a fading glory that men might see in us. This is a fight for our very soul, an eternal fight for the spirit in us that will last forever.

Let the words of Solomon serve as our battle cry! “When the whirlwind passes, the wicked is no more. But the righteous has an everlasting foundation.” (Proverbs 10:25). It is time we rose up, and fought like the whirlwind. Time we walked onto the battlefield and looked the giants of this world square in the eyes. Knowing that the One who stands behind us brings far more fear to their eyes, than they can ever bring to ours. Time we let no giant stand in the way of promises He has ahead for us, the milk and honey that He has waiting for us. It is time for us to feast! And I do not know about you, but I am hungry!

Praying your visions are not filled with giants, only filled with the loving face of our Lord!