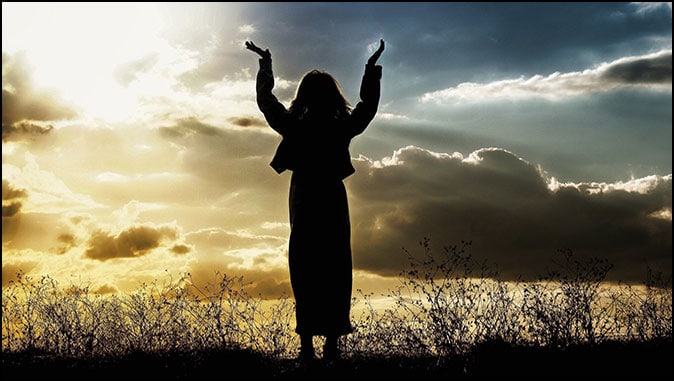 In response to the two mass shootings at New Zealand mosques in 2019, Alexandria Ocasio-Cortez (commonly referred to as AOC) tweeted, “At first I thought of saying, ‘Imagine being told your house of faith isn’t safe anymore.’ But I couldn’t say ‘imagine’ because of Charleston. Pittsburgh. Sutherland Springs. What good are your thoughts and prayers when they don’t even keep the pews safe?”

Now, I don’t agree with AOC on much of anything. Our only commonalities are that we both live in the most blessed country in the world, and we are both women in our early 30s. Other than that, we are vastly different. She’s a career-focused and power-driven woman, and I am a homemaker raising and educating five young boys. However, I do agree with her that we don’t need “prayers.”

One of my greatest pet peeves is to see a burdened person sincerely ask believers to pray for a major need on social media or in group texts, and their “friends” or family flippantly respond with “prayers” or the praying hands emoji. Our culture has become so accustomed to responding in this manner, that it’s merely a formality as if saying, “Bless you,” after a person sneezes.

Sadly, we can make time to scroll and comment for hours on social media, but we can’t even stop to write out a genuine prayer to the one in need, list what we will specifically pray for, or call to pray personally with them. Shamefully, we don’t spare the time to petition our heavenly Father in private on their behalf either. We are slaves to our cell phones and schedules and don’t take prayer seriously. In our complacency, we have become liars when we type “prayers” or emoji hands. If we’re honest, that’s as far as we go, and we feel we have done our duty if we publicly acknowledge the pain, suffering, fear, or struggle that has been mentioned by typing “prayers.” AOC is correct. Those “prayers” are worthless and will never bring about change.

I can’t help but wonder, though, has AOC ever been in the presence of a true prayer warrior? In her most desperate hour, has anyone ever taken the time to intercede for her in prayer and cry out to the one and only Savior for whom she is so desperately searching? Or are “prayers” all she’s familiar with?

I am forever thankful for those in my life who are willing to stop what they are doing and diligently pray with me or for me, whether it be in public or private. Those fervent prayers are light in my darkness, fuel to keep up the good fight, and peace in the midst of chaos. These persistent prayer warriors have shown me the importance of standing in the gap on behalf of others, and now more than ever, we must become a praying people on behalf of our great nation.

Jesus clearly commands us to ask.

Are we Christians asking God to heal our land?

Are we petitioning our heavenly Father to preserve the freedoms that patriots have died for?

Are we pleading with God to open the eyes of those who are blind to the truth?

Are we requesting a great revival that will put an end to the violence that fills the streets?

Are we questioning how we can become more aware of the needs around us so that we can be the hands and feet of Jesus?

Are we begging God to protect us from communism and evil, self-seeking groups, politicians, and nations?

Are we praying for those affected by COVID-19 and asking God to bring it to an end?

Are we crying out to God to reveal to this nation that all lives matter – from the baby in the womb to the elderly in the nursing home, the rich to the poor, dark-skinned to light, preachers to politicians, and the law enforcement to the looters?

Are we asking God for a president who will respect the Bible and the principles upon which this nation was founded?

Are we asking God to save the leaders who are lost, deceived, and filled with hatred?

Are we asking God to prepare us to be bold and give us the strength to endure to the end?

On September 25, there will only be 40 more days until the election. Interestingly, the number 40 has deep spiritual significance in Scripture and generally symbolizes a period of testing or trial. For instance, the flood lasted 40 days and nights and eventually brought a new beginning. Goliath taunted Israel’s army for 40 days until young David faced the giant and conquered him. Jesus was tempted in the wilderness by Satan for 40 days, yet prevailed victoriously and was ready to lead with power and authority. When God wanted to bring transformation, the process often lasted 40 days.

Following the recent death of Supreme Court Justice Ruth Bader Ginsburg, AOC commanded her followers to be ready. “Let this moment radicalize you,” she urged.

My name is not popular like AOC’s. I possess no power or political influence. But as a mother who desperately loves this country and wants her sons to grow up peacefully in the land of the free and the home of the brave with life, liberty, and the pursuit of happiness, I also have a challenge. As followers of Christ, we need to be ready as well. During the next 40 days, I pray this moment of uncertainty and lawlessness will propel believers to be real.

As the radicals pointlessly burn down cities, I pray Bible-believing Christians will build up their homes powerfully. It’s imperative for parents to educate their children on what’s going on and what the Word says. Families must prepare for a spiritual battle like we have never seen before. We need every man, woman, boy, and girl in this fight. Begin your day with prayer. Pray on the way to school and work. Pray for our country when you eat your meals, and humbly take up your position in this war on your knees with your family every night. “Prayers” and praying hands simply won’t do. It’s not enough to be a faithful church member in the pew; we must become fervent warriors on the front lines. The reason Christians have become powerless is because of our own prayerlessness. We must ask!

Adrian Rogers once said, “Our greatest problem is not unanswered prayer, but unoffered prayer.” He also stated that prayerlessness is not only a tragedy but a sin since we have been commanded to ask. According to James 4:2b (NASB), we have brought this mess upon ourselves: So you fight and quarrel. You do not have because you do not ask.

As the radicals post their pictures kneeling for the flag, I encourage you to flood social media with pictures of your family on their knees for the next 40 days. Even though this blog will be censored by cowards fearful of truth and determined to abolish our freedom of speech, I pray those who do see it will post a simple prayer a day for our nation and its leaders. Urge every Christian to post his or her prayers for our nation, and maybe those posted prayers will reach AOC. My personal prayer is that in the next 40 days, she will finally understand the power of prayer, feel the presence of the Lord, and allow Him to fill every void in her life. I pray that a relationship with the King of Kings is something she will find and will be another thing we have in common.

Take up your positions, church. Beginning Friday, September 25, 2020, may we pray like we’ve never prayed before. Be steadfast. Be real. Believe in the transformation of our nation that only God can bring. Our prayers can change history. We need only to ask!

These 40 days are for our Freedom!