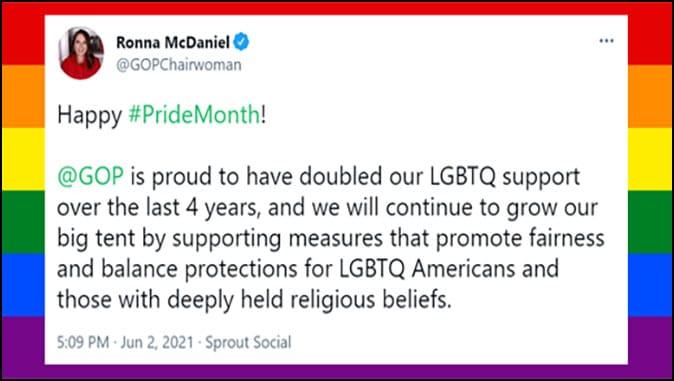 Outrageous Tweet ‘o’ the Month is this from Republican National Committee chair Ronna McDaniel on June 2, 2021, in honor of “pride” month:

@GOP is proud to have doubled our LGBTQ support over the last 4 years, and we will continue to grow our big tent by supporting measures that promote fairness and balance protections for LGBTQ Americans and those with deeply religious beliefs.

Let’s break that down into all its troubling pieces for a close analysis that should reveal why McDaniel must step down:

– The chair of the RNC is celebrating the month dedicated to sexual sin, thereby revealing her moral, social, and political ignorance.

– “@GOP” makes clear that McDaniel is speaking for the GOP.

– McDaniel and her collaborators with their big fat noses in the now-purple tent intend to support policies, practices, and laws that homosexuals and cross-sex impersonators want and create.

– McDaniel believes that “identities” constituted by disordered subjective sexual feelings and perverse sexual acts must be treated in policy, practice, and law like objective, non-behavioral, morally neutral conditions like race (or skin color). Which other deviant sexual desires and acts does McDaniel think should be treated “fairly?” Should the GOP grow its colossal tent by supporting measures that promote fairness for Zoophiliac Americans? Polyamorists? Kin-lovers? Infantilists? Sadomasochists? If not, why not? Why just homoeroticism and cross-sex impersonation?

– McDaniel and her collaborators evidently believe there exist policies, practices, and laws that treat homosexuals and cross-sex impersonators unfairly. What does “fairness” mean to McDaniel? How specifically does she define it? In what specific ways does McDaniel think those who are sexually attracted to members of their same sex or who pretend to be the sex they aren’t are treated unfairly? What policies and/or laws would tent-expander McDaniel change?

– McDaniel inadvertently revealed that she is definitely not one of “those with deeply religious beliefs” to whom she referred—at least not one of those with theologically orthodox religious beliefs. No person with theologically orthodox beliefs would assert or imply that homosexuals and cross-sex impersonators are treated unfairly in law or public policy. No theologically orthodox person believes that Christians, Christian churches, Christian parachurch organizations, or Christian educational institutions should be prohibited from living in accordance with biblical precepts on sexuality, whereas “LGBTQ” activists do. And to be clear, believing homoerotic acts and relationships or cross-sex impersonation are immoral acts and making decisions based on those beliefs is not unfair to anyone.

– Word to McDaniel: There is no way to balance the desires (euphemistically renamed “protections”) of “LGBTQ” Americans and protections of the religious liberty of theologically orthodox Christians. It is a zero-sum game, and right now, religious liberty is losing to sexual libertinism.

To have the head of the Republican Party celebrate the egregious sins of homosexuality and cross-sex impersonation should shock and outrage Republicans. “LGB” and “T” activism pose the greatest threat to First Amendment protections of speech and religious exercise ever posed in American history. The normalization and celebration of homoeroticism and cross-sex impersonation are destroying individual lives, the bodies of children, families, privacy rights, the safety of girls and women, women’s sports, churches, government schools, colleges and universities, and the arts. And we have the head of the only party ostensibly committed to protecting life, the family, and religious liberty celebrating that which is destroying America.

With unprincipled, myopic pragmatists like that, who needs enemies.

Take ACTION: Click HERE to send a message to GOP leaders (state and nation) urging them to call for Ronna McDaniel to step down for her ignorance and failure to uphold foundational principles critical to the health and future of America.