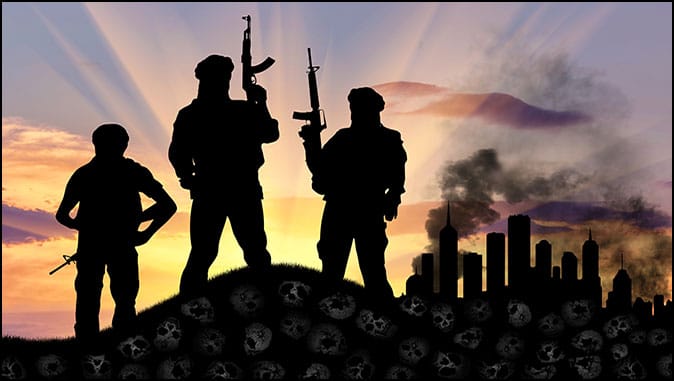 When it comes to terrorism, if an individual criticizes groups that support or are linked to terror, he/she will be labeled by those groups an “Islamophobe.” While the term is loosely defined as someone hateful of Muslims, more often than not it is used as a malicious way to silence critics. Today, however, it seems that, even if you are critical of the terrorist groups themselves, you will be branded with “Islamophobia.” That is what Florida State Representative Randy Fine has discovered, as he is being attacked by Islamist groups for the language he has used, in response to recent terrorist acts perpetrated by Hamas and Palestinian Islamic Jihad (PIJ).

For ten days in May, Hamas and PIJ randomly fired thousands of rockets into Israeli neighborhoods, including those located in Jerusalem and Tel Aviv. Their stated reason for doing so was that they were responding to Israeli security forces entering the al-Aqsa Mosque (in reaction to Arab rioting), a structure that is considered holy to Islam. In reality, though, there can be no excuse for terrorist groups targeting civilians. There is no legitimate excuse for terrorist organizations targeting anyone for any reason. As a result of the actions of Hamas and PIJ, twelve Israelis and over 250 Palestinians died (many as a result of misfired Hamas rockets).

State Representative Fine reacted strongly to the terrorist attacks with unapologetic language. He referred to the terrorists as “animals.” He tweeted, “Proud to stand with my colleagues, both Republicans and Democrats, in condemning the Islamic terrorism coming out of Gaza. I fully support Israel using maximum force to punish these animals. #NoMercy.” Along with his tweet, Fine posted a statement made by the Florida Legislature’s Jewish Caucus, of which he is a member, in support of “Israel’s right to defend itself” and condemning “the indiscriminate targeting of civilians” and the “use of… human shields” by Hamas.

A number of Islamist groups, including the Florida chapter of CAIR, the Islamic Circle of North America (ICNA), Emgage and the South Florida Muslim Federation (SoFlo Muslims), took exception to Representative Fine’s language and his use of the Jewish Caucus statement and issued a statement of their own. It was addressed to all the members of the caucus. The groups said that Fine’s tweets were “used to promote hatred, division, and incitement to violence” and that the tweets “dehumanize all Palestinians and use Islamophobic tropes.”

CAIR, as well, put out a press release stating the following: “Spewing hate and inciting violence is simply unacceptable conduct for an elected official whose duty is to serve the public, which means all of their constituents. Our message to Randy Fine and our legislators is clear, Islamophobic rhetoric and dehumanization of groups can simply not be tolerated.”

For these organizations to accuse others of “hatred” and “violence” is highly hypocritical. CAIR has foundational and financial ties to Hamas. ICNA’s longtime colleague, Ashrafuz Zaman Khan, was sentenced to death in Bangladesh for his role in the murders of 18 people as a death squad leader. The founder/chairman of Emgage, Khurrum Wahid, was reportedly placed on a terrorist watch list in 2011. And the Muslim Federation has a member, Masjid Jamaat Al-Mu’mineen (MJAM), that uses its website to promote: female circumcision, killing homosexuals, setting people on fire, stoning women, and labeling Jews and Christians “the enemies of Islam.”

Like Representative Fine, these groups have also had strong reactions to what took place between Israel and the terrorists. Last month, CAIR and ICNA participated in Tampa, Florida anti-Israel rallies that were organized by CAIR and convicted Palestinian Islamic Jihad member Hatem Fariz. Fariz pled guilty to material support for PIJ, in July 2006, and spent nearly four years in prison. CAIR-Florida Executive Director Abdullah Jaber spoke at all the rallies and repeatedly led the crowd in chanting, “We don’t want a ceasefire.” The ceasefire, agreed upon by Israel and Hamas, ended the death and destruction that was taking place on both sides.

CAIR, ICNA, Emgage and the South Florida Muslim Federation wrote their message condemning Representative Fine, in order to: falsely paint him as an extremist, alienate him from his colleagues in the Florida Legislature, and possibly to destroy his life. They accused him of “Islamophobia” not because they believe he hates Muslims, but because they do not like what he said about the terrorist outfits they themselves are linked to.

And while Representative Fine used strong language in discussing the recent Mid East conflict, as he is obviously passionate about the issue, the groups that are attacking him for it are the real promoters of bigotry and violence, as much of their existence is based on bigotry and violence. In reading the statement put out by the Islamist groups and further statements put out by CAIR, the members of the Jewish Caucus should understand that the goal of these groups is not to stop hatred and terror. It is only to silence those who speak out against them, the Islamist groups.