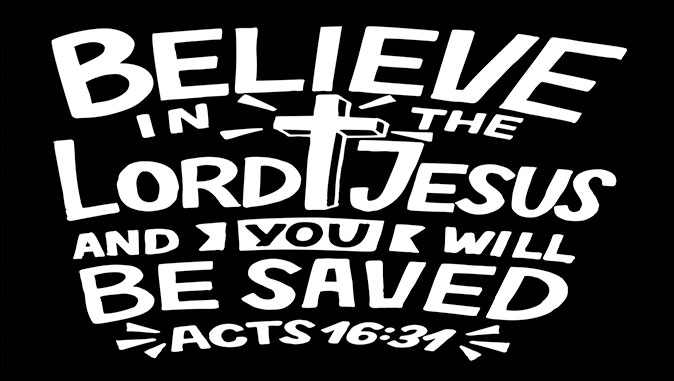 If You Believe It, You Have It
By Jack Kelley

“For God so loved the world that he gave his one and only Son, that whoever believes in him shall not perish but have eternal life” (John 3:16).

Over and over the Pharisees and teachers of the Law had told the people how God expected them to live, and a lot of it was down right impossible. So one day they asked Jesus point blank, “What must we do to do the works God requires?” (John 6:28). It was a perfect opportunity for the Lord to specify every detail of God’s “do list” for humanity, His non-negotiable standards for admittance into His Kingdom. Would He tell them to get out pen and paper and be ready to write while He repeated the 10 commandments, or the 613 laws of the Torah? How about the Sermon on the Mount? How would He answer humanity’s central question concerning our responsibility to our Creator?

Throughout the New Testament this unmistakably clear answer would be repeated.Here are a few examples;

“For it is by grace that you have been saved, through faith – and this not from yourselves, it is the gift of God – not by works so that no one can boast.” (Ephe. 2:8-9)

“If you confess with your mouth Jesus is Lord and believe in your heart that God raised Him from the dead you will be saved.” (Romans 10:9)

“For you know that it was not with perishable things such as gold or silver that you were redeemed from the empty way of life handed down to you from your forefathers, but with the precious blood of Christ, a Lamb without blemish or defect. Through Him you believe in God, Who raised Him from the dead and glorified Him, so your faith and hope are in God.” (1 Peter 1:18-19, 21)

“But when the kindness and love of God our Savior appeared, He saved us, not because of righteous things we had done but because of His mercy. He saved us through the washing of rebirth and renewal by the Holy Spirit whom He poured out on us generously through Jesus Christ our Savior, so that having been justified by His grace, we might become heirs having the hope of eternal life.” (Titus 3:4-7)

How much clearer can it be? Our faith has saved us, and even that was a gift from God. He gave us the faith to be saved without cost or condition. Maintaining that faith is the only thing we have to do. Indeed it’s the only thing we can do, because holding on to our faith is the only effort we can exert that isn’t counted as work (Romans 4:4-5). Anything else we do in a misguided effort to improve or perfect our position before Him is religious work and devalues the incredible price He paid so that we could have it for free. It shows Him that we don’t think He finished the job.

So it’s not what you do that matters, so much as what you believe. The work that God requires is that you will hold on to the faith you’ve been given, to nurture it and to protect it from the hollow and deceptive philosophy that depends on human tradition and the basic principles of this world rather than on Christ. (Col. 2:8) These deceptive philosophies fall into two categories I call Gospel Plus and Gospel Minus. Remember, they all claim to be Christian.

These are the religions that add to what Jesus did. They legislate behavior just like the Pharisees did, with rules and regulations you must obey or risk losing everything. In effect they’re trying to convince you that Jesus only began the salvation process at the cross. It’s up to you to complete it by behaving in ways that meet with their approval. Some of them say that Jesus paid for all your sins up to the moment you were saved, but after that everything’s on your head. It’s like you got a free gift but have to work to keep it. Your subsequent behavior will either keep you saved or cause Him to revoke your salvation, and once it’s revoked you can never get it back. Others would have you believe that His grace will only come into play after you’ve done everything possible to save yourself.

The Gospel Plus religions would have you believe that He loved you enough to die for you while you hated Him, but once you gave Him your heart He started adding conditions to make you toe the mark. Any slip on your part can lock you out forever. So no matter which way you look at it, the Gospel Plus means your salvation is really all up to you.

Then there are the folks who don’t believe you have to claim the Lord’s death for yourself at all. Rejecting the notion of a personal Savior, they contend that He died for everyone, so we’re all going to heaven. Some say that those who aren’t saved can sit down with the Lord after they die and work things out. Others even say that Christianity is only one of the many roads to Heaven so it doesn’t matter who or what you worship as long as you’re sincere.

Both these views mount a serious attack on the clear and straightforward truth of the Gospel, making complex that which the Lord gave His life to keep simple. Paul said it’s our job to resist these attacks, to not let either view cause us to waver from the truth that we’re saved because of what we believe, not because of how we behave.

The Shepherd And The Sheep

Throughout His ministry, the Lord characterized Himself as the good shepherd. Everyone who’s worked with sheep knows how they’re prone to wander, and that it’s the shepherd’s job to bring them back. There’s no behavior on the part of a sheep that would convince the shepherd to abandon it. And so it is between the Lord and us.

“This is the will of Him Who sent me,” He said, “That I shall lose none of all that He has given me, but raise them up at the last day. For My Father’s will is that everyone who looks to the son and believes in Him shall have eternal life and I shall raise him up at the last day.” (John 6:39-40)

He made our salvation possible and then did everything necessary to provide it without cost. All that remains for us is to receive it and believe it. If there was any way that we could save ourselves, surrender or lose our salvation, or get to heaven without receiving it in the first place, then at best the Lord was overstating His role in our lives and at worst He was saying something that simply isn’t true.

Only by grace, only through faith, only from Scripture. This was Martin Luther’s great epiphany, and it became the battle cry of the Protestant Reformation. But God’s enemies are not so easily defeated and sadly both the Gospel Plus and Gospel Minus philosophies eventually crept into the Protestant Denominations, and you’ll find elements of both scattered through out Christianity today.

So no matter where you attend worship each week, or even if you don’t, the best way to make sure you’re saved is to cling mightily to the simple truth of the gospel. Christ died for our sins according to the scriptures, he was buried, and He was raised on the third day according to the scriptures. (1 Cor. 15:3-4) If you confess with your mouth “Jesus is Lord” and believe in your heart that God raised Him from the dead you will be saved. (Rom. 10:9) That’s all there is. He gave you the faith to believe it, and if you believe it, you have it. Selah.