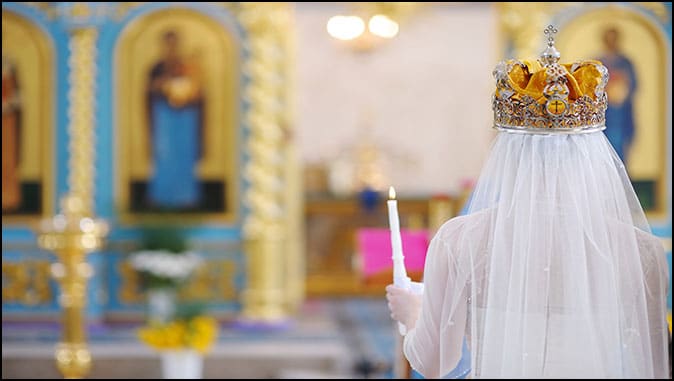 The Bride
By Jack Kelley

This is an update of an article originally published in March 2004. While it’s based on the Bible, it also includes Jewish wedding traditions from Biblical times. Some of these traditions go all the way back to Abraham’s time and are described in Genesis 24. Others come from various books and commentaries I’ve read.

Birth of a Tradition

We’ll begin with a summary of the story of Isaac and Rebekah from Genesis 24. Abraham was getting old and Sarah had died, so he sent his chief servant to the land of his brother to get a wife for Isaac. The servant loaded up 10 camels with gifts and set off. After some time he arrived in the village of Abraham’s brother Nahor. Approaching a young woman near a well, he asked for a drink, in accordance with a plan he had devised with the Lord. When the young woman offered to draw water for his camels as well, she was giving him the confirming sign he had asked the Lord to provide. He then accompanied her to her family’s home.

That evening he asked her family for permission to take the young woman, whose name was Rebekah, back home to be the bride of his master’s son Isaac. Using the gifts to reward her and to compensate her family for the loss of their daughter, he said he wanted to leave immediately. When Rebekah’s father turned to her for final approval, she agreed and they set off the next morning. After several days travel during which the servant told her all about her betrothed, they arrived at Isaac’s home where she met him for the first time. That very evening Isaac and Rebekah were married.

That’s The Way It Goes

Members of royalty often followed a procedure very similar to this in obtaining brides for their sons, sometimes arranging them years in advance of the actual event. Common people also adopted this method, but of course with them the prospective groom acted on his own behalf rather than sending someone in his stead.

Even today in some Middle Eastern cultures arranged marriages are common, with the groom’s mother selecting a bride for her son. The logic here is that a young man’s mother knows her son and his temperament better than anyone and can most accurately predict what kind of woman would please him. On one of our trips to Israel and Jordan, our Jordanian guide told us that his marriage had been arranged in this way and he was very happy with his mother’s selection.

Back To Biblical Times

In those days when a man took a liking to a young woman, he approached her father to ask for her hand in marriage. Due to the prevailing economic conditions back then, it took a long time for a man to become financially stable enough to think about starting a family. When he did, he looked for a bride who was still young enough to bear him many children who could help him work the land when he got old. So while the man in these cases could be in his thirties, the potential bride would often still be a teenager.

Inviting the man into their home, the young woman’s parents sat down with him around a table while she brought wine and four cups. After she had poured each of them (but not herself) a cup of wine, she listened while this man, who she was meeting for the very first time, described his assets, skills and other qualities that made him a desirable mate. A brief negotiation followed where the price he would have to pay as compensation for the family’s loss of their daughter was determined. It was called the bride price.

If the two men reached an agreeable amount all eyes turned to the daughter who had been listening intently to the entire discussion. She now had to decide if she would take this man to be her husband. If she turned her empty cup upside down, the man went away never to return. But if she filled her cup and took a sip of the wine, she was agreeing to become his wife.

At that point they signed a betrothal agreement, wherein the man promised on oath to return for the young woman when all the wedding preparations were complete. Now they were officially engaged and the relationship could only be terminated by a divorce. He went away to build a home for them on family property next to his father’s house. This could take some time, and the couple rarely met again until the father of the groom pronounced the newly built home fit for habitation. Only then was the wedding date set, and the man given permission by his father to go collect his bride for the wedding.

During this time the young woman was to watch and wait at her parents’ home. She and her bridesmaids had to maintain a constant state of preparedness, since the wedding date would not be revealed to her until the bridegroom actually appeared at her door to take her to their new home.

For his part, the groom would try to show up unexpectedly to surprise her, carrying her off suddenly “like a thief in the night” when no one would see them. The only advance warning she would get was the sound of his voice shouting her name and the blast of a ram’s horn.

When the bridesmaids discovered that the bride had been “spirited away” they would organize a great torch-lit procession, going throughout the whole town announcing that the wedding banquet was soon to begin. The banquet typically capped off a seven-day celebration during which the bride and groom were hidden away in their private rooms while the whole town made merry. Then they reappeared at the banquet to receive the congratulations of their friends and family, and their married life officially began. The father of the groom picked up the tab for all the festivities.

Maybe you’re beginning to see the similarities. The Lord Jesus, being royalty, does not come directly seeking His bride. His Father sends an unnamed servant on His behalf, just like Abraham did. This servant of course is the Holy Spirit, our Comforter, who beckons us. Interestingly, the name of Abraham’s servant was Eliezer, which translates “God is my Comforter.” And even more so, in Genesis 24 Eliezer’s name is never mentioned, as if he’s serving as a model of the Holy Spirit, whose name is also withheld from us.

The role of the Holy Spirit is to extol the virtues of the Son of God, who when told that the Bride price was nothing less than His own shed blood, agreed to die for us, and for the joy set before Him endured the cross. (Hebr. 12:2). His last word from the cross, recorded in John 19:30, was tetelesti, a Greek word that’s been translated “It is finished.” In the Lord’s time it was a legal term that literally meant, “Paid in full”, It was written across paid invoices and prison documents upon release of prisoners who had served their full terms, and had therefore paid their debt to society. With His death Jesus paid the price in full for His bride.

At the Last Supper Jesus had hoisted His cup and said, “This cup is the new covenant in my blood; do this, whenever you drink it, in remembrance of me.” (1 Cor. 11:25). When we first “take the cup” we’re signifying that we’re officially betrothed, and we’re rewarded with gifts from the Holy Spirit, who is sealed within us as a guarantee of our inheritance (Ephe. 1:13-14). We then begin our journey, the balance of our life on Earth, while the Holy Spirit continues to teach us about our betrothed and helps us develop behavioral standards that are pleasing to Him.

As He does, we learn to our utter amazement that we have always been our Lord’s consuming desire,

That He lived so that we might come into existence and be set apart,

That He has longed for us to know how much He loves us,

That His every word and action were designed to bring us honor and express His devotion to us,

That He has dedicated Himself to us and covered all of our imperfections with His love, and

That He gave His life for us.

For His part the Lord is even now building a house for us. “You trust in God; trust also in me,“ He said. In My Father’s house are many rooms. If it were not so, I would have told you. I am going there to prepare a place for you. And if I go and prepare a place for you, I will come back and take you to be with me so that you also may be where I am.” (John 14:1-3) He has sworn on oath to return for us when the wedding preparations are complete and take us to His Father’s house, to the place He’s been preparing for us.

One day when we least expect it, He’ll come like a thief in the night and spirit us away to our new home. “For the Lord Himself will come down from Heaven with a loud command, with the voice of the archangel, and with the trumpet call of God, and the dead in Christ will rise first. After that, we who are still alive and are left will be caught up together with them in the clouds to meet the Lord in the air. And so will we be with the Lord forever.” (1 Thes. 4:16-17).

In Heaven the King and His Bride will be hidden away in our rooms, while on Earth the last seven years of human history unfold (Isa. 26:19-20). At the end, following the Marriage Supper of the Lamb (Rev. 19:7-9), we’ll return together to rule and reign for 1000 years, and then it’s off to our eternal life with Him. Praise the Lord. Selah.

The Unbiblical Basis of Amillennialism

The Unbiblical Basis of Amillennialism By Jonathan C. Brentner Throughout the Dark Ages and Reformation,…