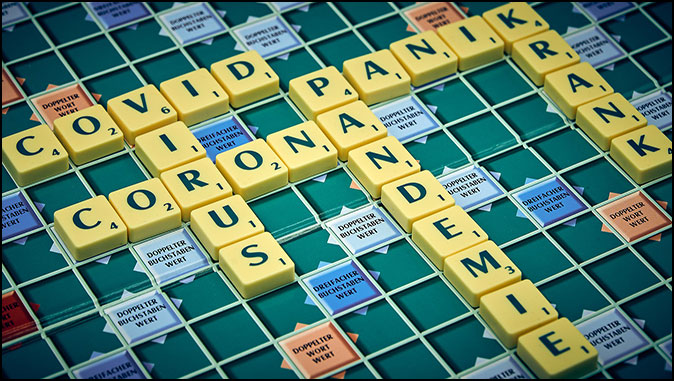 Your Calculated Risk of Dying from COVID-19
By David Lane

If you are between the ages of 20 and 40 your risk of dying from COVID-19 is the same as your chance of dying from playing football.

If you’re between the ages of 15 and 24 you’re more likely to be fatally afflicted by falling down the stairs than by COVID-19.

Kids under 15 have more chance of getting hit by lightning than of dying from COVID-19.

Healthy women under 40…your odds of dying from COVID-19…are about the same as dying from a plane crash.

“If you’re under the age of 65 the chance of dying of COVID-19…is the same risk you face driving on your commute to work.” This is how John Ioannidis, M.D., Professor of Medicine of Health Research and Policy and of Biomedical Data Science at Stanford University School of Medicine, presents the insignificant risk posed by the “deadly and novel” virus.

The 6-month manic COVID-19 campaign – driven by Big Pharma’s panic for profit, aided and abetted by un-American censorship from Big Tech’s Amazon, Apple, Facebook, Google, and a drumbeating mainstream media – has reached the point where if people were told to get into boxcars to be taken to ‘Virus Protection Camps’, many would rush to get in line.

The turbulence and upheaval engineered by government bureaucrats and blue state potentates will require brisk countermeasures if freedom is to be sustained.

As early as May, this year, retired neurosurgeon Russell Blaylock, M.D., issued a warning about wearing face masks: not only do masks fail to protect the healthy from getting sick, but they also create serious health risks to the wearer – airlines, are you listening? The bottom line, Dr. Blaylock says, is that if you are not sick you should not wear a face mask. He added, “[No credible scientific study has] established a conclusive relationship between mask use and protection against influenza infection [read: COVID-19].”

You might be thinking, why have we not each and every winter, worn masks as protection from the flu?

Regarding the question what might be going on in America, Steven F. Hotze, M.D., has this to say: “The purpose of masks is to break your will, destroy your individuality, and make you submissive to tyrannical government bureaucrats [Fauci] and Leftists [blue state governors and mayors]. First you lose your identity and then you lose your freedom.”

The medical mantra to make masks matter beyond their measure, mindlessly multiplied by the mass media, has mandated a state of muted maskism, or rather masked mutism, where assertions are unquestioned and misgivings remain unanswered.

Before attempting to make a spiritual application, we go 43 years back to the days before this writer got converted. Had you known David Lane then, you would have thought, “I cannot imagine anyone in the world less likely to be saved by Christ! It will be near impossible to find someone more irresponsible, more heedless, more ungodly than him.”

This once again brings us to Governor Gavin Newsom. Over the past few months we have pointed out the sullied history, irrepressible arrogance, and questionable character of the 52-year-old Newsom, as seemingly closely affiliated with the serpent of Gath in 1 Samuel 17.4 Goliath’s strutting encroachment of Israel and blasphemous taunting echo Newsom’s malevolent manifesto of declaring CA churches “non-essential,” while classifying liquor stores, marijuana distribution centers, and abortion clinics as “essential.”

Before pagans like Goliath of Gath roamed the earth to oppress and abuse others, earlier leaders and rulers also thrived on the large-scale spreading of fear and panic, which is the trademark of tyrants [Numbers 13:25-33]. Israel cowered before both. Today’s blue state governors and mayors are just the latest hectors exploiting agonizing angst and petrifying panic to gain control of the public square.

It would seem that American Christendom has been strategically positioned for an urgently needed wakeup call by the living God. This is our kairos, our propitious moment for action. If Christians are to sustain freedom and liberty for their children and grandchildren, a serious change of impact will be required.

Loyalties are now being tested in the present crisis as “serpents” and “giants” stalk America, i.e. in the likes of Gavin Newsom, Black Lives Matter, Antifa, and Fortune 500 Companies, indirectly or directly rooting for looting and setting fire to America’s cities.

To those pastors sitting out the battle against grandiose pronouncements demanding a halt to reopening America’s churches, we paraphrase from The Making of a Man of God: Lessons from the Life of David. For a while, it will be possible that you, like David, may be able to soothe or satisfy radically secular elected officials and government bureaucrats by playing your spiritual harp. But the moment you raise your head in opposition to their wanton and unrestrained abuse of power, and despotic misappropriation of authority, they will take aim at you. Or as Alan Redpath expressed it: “You will discover that the place of rejection by others is the place of acceptance by God.”

We’ll find the answer to wanting to know what to do in Ronald Greer’s If You Know Who You Are, You Will Know What to Do. He tells of the dark days of Nazi usurpation of Holland with Gestapo everywhere and Jews vanishing. Dutch Christians asked Dutch Reformed theologian, linguist, and missionary Hendrik Kraemer [1888-1965] what they should do.

The missionary responded, “I cannot tell you what to do but I can tell you who you are. If you know who you are, then you will know what to do.” He then read to the fearful Christians the words first spoken to the equally fearful Christians in 1 Peter 2:9: “You are a chosen race, a royal priesthood, a people claimed by God as his own, to proclaim the triumphs of him who called you out of darkness into his marvelous light.”

Neither needing yet another political rally nor a prayer march around the Capitol, what America really needs is a Joel 1:13 call for lamentation and repentance over what we, pastors and churchgoers, have allowed to happen in a nation “founded for the glory of God and advancement of the Christian faith.”

The appeal will be for mercy. It won’t be about who can come up with the loftiest prayer. American Christendom has become flabby and palmy, yet listless spiritually with no influence in the culture. We must begin with reshaping public education and decluttering secular culture. Following admittance of culpability, confession should be immediately wedded to action. This way we will quench the massive fireball heading our way on November 3, 2020.

Yet, let us never forget that those who walk with Christ never lose hope, because we know that “Man’s extremity is God’s opportunity. But He does not always, nor generally, act immediately when we are brought low. No, he ‘waits to be gracious’ [Isa. 30:18], that our helplessness may be the more fully realized, that His delivering hand may be seen the more clearly, and that His merciful interposition may be the more appreciated” [A.W. Pink, The Life of David].

May the Lord bless you and keep you, make His face shine upon you, and be gracious to you. May the Lord turn His face toward you and give you peace.

Gideons or Rahabs are rising to stand.