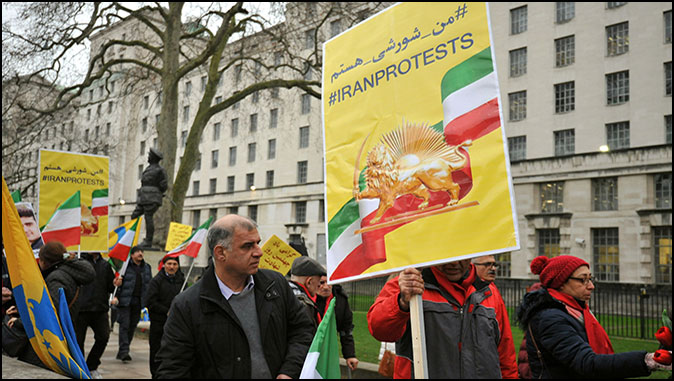 The Biden administration appears to be repeating the Obama Administration policy of choosing to be silent in the face of the Iranian regime’s bloodshed, human rights violations, and crackdowns that kill and wound peaceful protesters.

Recently, huge numbers of people in the province of Isfahan rose up against the Islamic Republic. Tens of thousands of farmers and other demonstrators poured into the streets and criticized government officials over a severe water shortage. Many were heard chanting, “The people of Isfahan will rather die than give in to disgrace”; “Zayandeh Rud [river] is our undeniable right”; and “We will not go home until we get our water back.”

As the regime cut off access to the Internet, security forces fired shotguns as well as tear gas at the protesters, resulting in deaths and hundreds of injuries. As #BloodyFriday began trending on twitter, Mohammad-Reza Mir-Heidari, Isfahan’s Chief of Police, threatened “to deal” with protestors.

The organization Iranian-Americans for Liberty has pleaded with the Biden administration to show solidarity with the protesters:

The Iranian regime does not appear to have a practical solution for the water shortage. It continues to mismanage the economy, spends the country’s resources on its proxies and militia groups, and allocates a significant portion of the nation’s water to the projects of the regime. “We are not in a position to provide their water needs,” the minister of energy admitted in the face of the protests. Instead, the regime has resorted to its usual modus operandi of cracking down with brute force on whoever protests.

Throughout all of this, the Biden Administration stays silent — just as the Obama Administration did during the 2009 nationwide uprisings in Iran. As Mitt Romney said in 2012:

“When millions of Iranians took to the streets in June of 2009, when they demanded freedom from a cruel regime that threatens the world, when they cried out, ‘Are you with us, or are you with them?’ – the American president was silent”.

As the non-partisan Council on Foreign Relations described it:

“While Obama initially opted for a muted response, the Iranian regime’s violent crackdown of opposition supporters complicated his administration’s attempt to balance outreach with its defense of human rights.”

The latest protests are not limited to farmers. In recent weeks, retirees and pensioners have staged more than a dozen protests, each spanning multiple cities. The most recent of these protests adopted slogans such as, “We have seen no justice; we will not vote anymore.”

Karmel Melamed, an Iranian-American journalist and commentator, posted on Twitter:

“Horrific images of my compatriots in the Iranian city of Isfahan being slaughtered by ruthless Ayatollah regime’s thugs & security apparatus for peacefully protesting against the regime! This older woman was shot in cold blood on the streets. Are you seeing this @StateDept?”

Masih Alinejad, an activist and Iranian-American journalist whom the Iranian regime plotted to kidnap from New York, tweeted:

“This is what happening in Iran right now. People took to the streets in Isfahan for a peaceful protest but they are being violently suppressed by the regime. West is busy getting a nuclear deal. You must warn the Islamic Republic that there will be consequences for such brutality.”

And Sheina Vojoudi, an Iranian dissident, echoed what many Iranians believe as she told the Jerusalem Post:

“Iranians from other cities have announced that they will protest to support the people of Isfahan. Now we Iranians know exactly that the enemy of our nation has occupied our country since 1979 and we must liberate our country. This is a sure thing that will happen very soon. If the free world wants to stand on the right side of history, they should support the Iranian people who have been fighting for their freedom for the last 43 years. The Iranians need free internet because the regime has already shut down the internet in Isfahan. They want to kill the protesters like in November 2019 and that must be stopped. Soon Khuzestan, Yazd, and other cities will also come to the streets and they will face the same danger.”

The Biden Administration’s ‘Diplomacy’ with the Iranian Regime