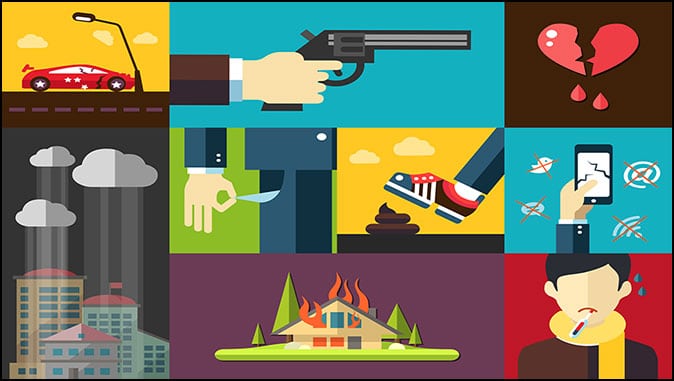 Why Do Bad Things Happen to Good People? – Part 2
By Jack Kelley

Last time I said that this is the first and most frequently asked question when people experience serious trouble, whether they’re believers or not. There appear to be at least three answers to this age-old question. The first and by far the most common is found by looking in a mirror. The second has to do with the consequences of sin in the world (we covered these last time) And the third concerns our own sin nature. I’ll share a story to tie the first two together and then use a brief summary of the Book of Job for answer number three.

Tell me a Story

I’ve altered certain facts to disguise this believer’s identity, but his story is true. To most he seems like a friendly guy who takes life pretty much in stride, but behind closed doors he’s way different. Family tales of his temper tantrums are the stuff of legends. Some years ago he suffered a heart attack that required a bypass operation. While recovering in the hospital he learned of a minor accident that had left a small scratch on his car. The next time his family came to visit, he blew up and threw them out. He ignored the doctor’s advice on changing his eating habits to combat his cholesterol problem. I witnessed his temper once in a retail business when he didn’t get the service he wanted. He recently had another heart attack, and the day after getting out of the hospital sent his wife out for a fast food sandwich with fries and a coke. He claims that God sent his heart attacks and refuses to heal him.

This is a great example of our unwillingness to recognize the effect of sin in our world and then accept responsibility for our own behavior. God is not the creator of weak hearts and high cholesterol. He didn’t invent cancer or HIV. And He didn’t give this man his terrible temper. Satan introduced these things into the creation as a result of sin. Satan’s contamination of God’s creation caused my friend’s first heart attack. God did gift modern medicine with the ability to delay the effects of sin, and He also promised that when we’re born again we can be made new so this man is himself responsible for not following sound medical and spiritual instruction. And that helped bring about his second one. (Aren’t you glad you and I aren’t like that?)

The Book of Job?

Job was a wealthy, prominent man given to many good works. As we’ll see his reliance on these good works got him into trouble with Satan. The book opens with Satan receiving permission from God to afflict Job within certain limits.

Does That Sound Fair?

The fact that God gave His permission doesn’t mean that God desired to afflict Job, but He has to abide by His rules. They require Him to allow events that are not consistent with either His pleasure or His desire. When His rules are broken (we call it sin) He has to permit consequences. And that’s where Satan comes in. The name comes from the Hebrew ha’Sa tan’ which means “the accuser.” He had accused Job of sinning as we’ll see (It’s our sin that gives Satan access to us.)

Don’t jump to the conclusion here that if you’re ill or in trouble, it’s necessarily because of some great and secret sin of yours, (or think that because you haven’t sinned you shouldn’t have any trouble). Remember our earlier example.

Both these errors are covered in Job. He thinks he’s a righteous man, and as such, he questions why these bad things are happening to him. His “friends” on the other hand try to get him to admit that he must have committed some huge sin to deserve the affliction.

And Now; the Final Answer

The great lesson of Job is this. When we try to justify ourselves we end up condemning God. If we say we don’t deserve to be afflicted, we are really saying that God isn’t just or fair. But the bible is clear in stating that no matter how good we think we are, we’re nowhere near good enough to be called righteous in God’s sight. If we were we wouldn’t need a Savior, Satan would have no basis for accusing us, and God could not permit our affliction. Job’s belief that he had done too much good to deserve the torment he was getting was the basis for Satan’s accusation. We call that spiritual pride today. It’s a sin and it gave Satan the opening he needed.

Job’s pride prompted Satan’s accusation. God had to permit the torment but used it to change Job’s heart. (He does that sometimes.) When Job finally woke up, he confessed, was forgiven, and his losses were more than restored. So Job gets blessed, God gets His point across, and Satan gets used. Sounds fair doesn’t it?