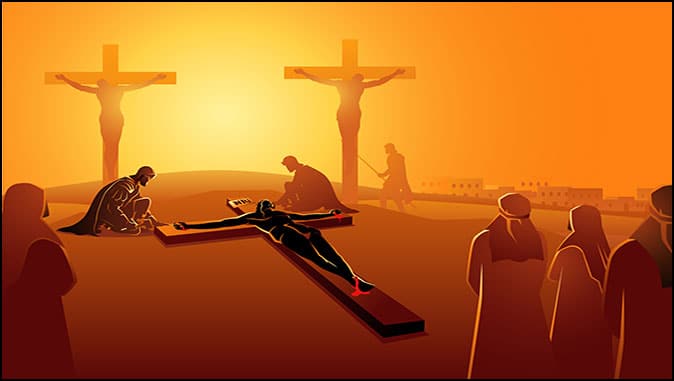 Why all the Violence?
By Jack Kelley

“Just as there were many who were appalled at him—his appearance was so disfigured beyond that of any man and his form marred beyond human likeness” — Isaiah 52:14

That’s the question non-believers often ask after seeing “The Passion Of The Christ,” and it’s a good one. Why does there have to be so much violence?

The easy answer pertains to the movie. There’s so much violence in the film because Mel Gibson wanted to make it as realistic a portrayal of actual events as possible. And even a cursory look at the people and the times tells you they were both very violent. Remember, some of their mass entertainment in those days involved watching humans being torn apart by wild animals for sport.

The Romans were oppressive conquerors who brooked absolutely no violation of their enforced peace, the “Pax Romana.” Executions were public and hideously violent, and all punishment was bloody and life threatening. (The Apostle Paul, being a Roman citizen, was legally spared from the standard, excruciatingly painful forms of execution because it was believed that Roman citizens were too good for that. He was merely beheaded.)

But the Romans weren’t the first, and by no means were they the most violent. The Assyrians, inventors of crucifixion, skinned people alive, chopped off their heads and mounted them on poles. The Babylonians threw Shadrach, Meshach, and Abednego live into a roaring furnace. They threw Daniel, an old man in his 80s, into a den of hungry lions. The Jews stretched Isaiah between two horses and sawed him in half. Mark was tied up and dragged into a fire to burn alive. Bartholomew was beaten with barrel staves, crucified and then beheaded. Peter was crucified upside down. Antipas was slowly roasted alive in a giant bronze kettle. Others were boiled alive, drawn and quartered, nailed to trees—and all this in public. It was thought to be a deterrent to crime. And we think our death by injection is barbaric.

The harder answer pertains to theology, specifically the difficulty in making the punishment fit the crime. Sins are crimes against God and His need for justice requires punishment. Jesus came to Earth as the Lamb of God, Who takes away the sins of the world (John 1:29). So what do you have to do to adequately punish someone for all the sins of mankind? Man’s sins are stacked up to the heavens, and God cannot ignore them.

We say, “He’s God. He can do anything. Why doesn’t He just forgive us?” The problem is, He’s not like us. He can’t express any of His attributes at the expense of any other one like we can. In other words, He can’t be arbitrary, or two-faced. If He wants to show mercy, His righteousness must first be satisfied. Before He can express His love for us, His needs for justice have to be met. If He wants to forgive our debts, someone else has to pay.

It’s said that about half of the people ever born are alive today. Each one of us has committed enough sin to warrant the death penalty. That means 13 billion people deserve to die for their sins, and a just God simply cannot overlook that. But because He so loves the world, He gave his one and only Son, that whoever believes in him shall not perish but have eternal life.” (John 3:16) His Son would pay the penalty due us. So what does it take for God’s justice to be served, so that out of His love for us he can purchase 12 billion pardons? (Remember that although many will go unclaimed, 12 billion pardons were purchased on the cross.)

I Hate It When That Happens

Second, what sort of suffering must one man endure to demonstrate how much God hates sin? In this age of Grace, we have such a candy coated perception of sin that we’ve forgotten how much God hates it. He HATES it. He destroyed well over a million people in the Great Flood because of their sins. What would He have to do to His Son to assuage His anger over all the sins in the history of mankind?

I Told You So

And then there’s the issue of prophecy. To prove that He was the Messiah, Jesus had to fulfill all the prophecies about His life AND death. Some of them had been a matter of public record for nearly 1000 years when He arrived on Earth. Prophecies like these:

“Your wrath has swept over me;
your terrors have destroyed me.
All day long they surround me like a flood;
they have completely engulfed me.
You have taken my companions and loved ones from me;
the darkness is my closest friend.” – (Psalm 88:16-18)

“I offered my back to those who beat me,
my cheeks to those who pulled out my beard;
I did not hide my face from mocking and spitting.” – (Isa 50:6)

“Just as there were many who were appalled at him-
his appearance was so disfigured beyond that of any man
and his form marred beyond human likeness” – (Isa 52:14)

“I am poured out like water,
and all my bones are out of joint.
My heart has turned to wax;
it has melted away within me.
My strength is dried up like a potsherd,
and my tongue sticks to the roof of my mouth;
you lay me in the dust of death.
Dogs have surrounded me;
a band of evil men has encircled me,
they have pierced my hands and my feet.
I can count all my bones;
people stare and gloat over me.
They divide my garments among them
and cast lots for my clothing.” – (Psalm 22:14-18)

“Surely he took up our infirmities
and carried our sorrows,
yet we considered him stricken by God,
smitten by him, and afflicted.
But he was pierced for our transgressions,
he was crushed for our iniquities;
the punishment that brought us peace was upon him,
and by his wounds we are healed.
We all, like sheep, have gone astray,
each of us has turned to his own way;
and the LORD has laid on him
the iniquity of us all.” – (Isa 53:4-6)

So There You Have It

Three huge problems to address. A lesser god would have washed his hands of us and gone away to let us die in our sins as we deserve. It took an unbelievable amount of punishment—punishment that in both intensity and duration exceeds what any other man has ever experienced—to make it possible for God to forgive us.

But Jesus, in all His love for us, agreed to endure it. And in all the blood and gore and pain and suffering let’s not forget this one thing. It was sufficient. His last words from the cross when translated literally come out “Paid in full!” And the fact that three days later He walked out of the tomb, having conquered death, proves beyond a shadow of a doubt that He had done it!

You see, if Jesus took upon Himself all the sins of the world as the prophecy above states (He literally became the physical embodiment of sin), and if God cannot abide the presence of sin, then the fact that He’s is alive at the right hand of God today proves that the price He paid was sufficient. For if even one little sin from all those that ever have or ever will be committed by man remained unpaid at the cross, He’d still be in the grave.

But since He came out of the tomb, you can make absolutely certain that you will, too. For if you confess with your mouth, “Jesus is Lord,” and believe in your heart that God raised him from the dead, you will be saved. (Romans 10:9)