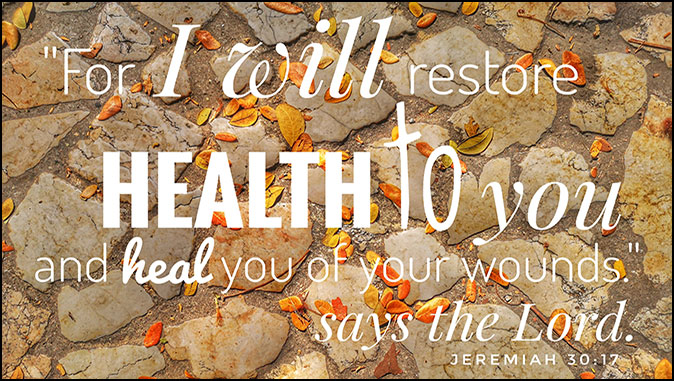 I Am the Lord, Who Heals You
A Bible Study by Jack Kelley

So many people have asked for healing lately, from the internet, the bible study, over the phone, or in person. Does God heal people today? Can we ask Him to heal us? Should we? He promised the Israelites that if they obeyed Him He would protect them from the diseases with which He afflicted the Egyptians, (Ex 15:26) but what about us?

What Does The Bible Say?

Of the Messiah, Isaiah prophesied, “Surely he took up our infirmities and carried our sorrows, yet we considered him stricken by God, smitten by him, and afflicted. But he was pierced for our transgressions, he was crushed for our iniquities; the punishment that brought us peace was upon him, and by his wounds we are healed.” (Isa 53:4-5)

The word “infirmities” in verse 4 translates as sickness or disease, “sorrows” translates as mental and physical pain, and “healed” in verse five means just that. In fact the same Hebrew word is used in Exodus (I am the Lord, Who Heals you) where the context is also physical healing. These words clearly and without condition or question refer to healing from the physical and mental anguish associated with illness and injury, and they’re included in the Mission of the Messiah. His death made our healing possible.

If you net out all the duplicates in the Gospels, there are a total of twenty one personal healing miracles. I don’t think that’s a coincidence; seven is the number of divine completion and three the number of the trinity. These twenty-one miracles were given to show us that we can be healed. In addition a version of the phrase “your faith has made you well” appears seven times in describing them. We should ask for healing and expect a positive outcome.

Paul taught that the Holy Spirit invests some believers with the gift of healing. (1 Cor 12:8) Reading the Book of Acts makes it clear that early believers saw people being healed and expected healing when they asked for it, and from church history we see that the belief that God answered prayers for healing was taken for granted. Groups of believers got together and prayed for healing just as James admonished them. (James 5:14-16)

It’s only when theologians began “spiritualizing” the promises of the Bible that people stopped believing in them. “Jesus didn’t really feed 5000 people.” they explained, “It’s just that He was such a captivating speaker that everyone forgot they were hungry.” And by taking one obscure use of the Greek word for healing where the author is obviously using an analogy, they re-interpreted dozens of clear passages to mean a spiritual healing rather than a physical one. (Hebr 12:13) This of course is a gross violation of the rules of interpretation. You always use clear passages to interpret obscure ones, not the other way around. But in the 20th century alone these theologians have persuaded several generations of believers that the Bible is more a collection of allegories than a reliable source of truth, and not to be taken seriously; certainly not where healing is concerned.

Your Faith Has Made You Well

The Bible states that faith comes through hearing, but we say “seeing is believing.” Regardless of what they read in Scripture, since not many Christians believe in healing and therefore don’t see any folks being healed, it’s hard for them to believe God can do it. But even if only one person has been supernaturally healed then the gift of healing is available now, and in fact many believers have been healed, or have seen others healed, or have even been used by the Lord in healing others. That makes the Bible passages indisputable. He is the Lord Who Heals You!

There are four levels of healing and I’ll list them in inverse order of value. The first is a medical healing without prayer. It’s the least desirable because of the risk involved with modern medicine’s reliance on drugs and human knowledge. The next is medical healing with prayer. It’s better because through prayer we not only tap into the spiritual side of healing, we also invoke the Lord’s help in guiding the doctor’s actions and influencing his decisions. The third is prayer without medical, relying totally on the Lord. For those whose faith is strong enough this is a remarkable experience.

But the fourth and perfect healing is always death, because for the believer death brings new life, a life without sorrow or crying or pain, a life in the presence of the Lord. Now please understand me, I’m not advocating any kind of accelerated death, like suicide or euthanasia, but if the Lord chooses to heal some by taking them to heaven where His promise of eternal joy and happiness can begin for them, who can fault that?

Again, because we haven’t been taught to expect a literal heaven and therefore know very little about it, it’s hard for us to see someone going there as a victory. In fact many who pray for healing feel a sense of failure when their loved one dies. We are so entrenched in our thinking about the ways of this world and we know so little about the next one that we always look at any abrupt, and especially early departure from life as a terrible tragedy, when in fact for a believer it’s the ultimate healing.

In Revelation we’re told that a time will come on Earth when the living will envy the dead (Rev. 9:6) because for them, life on Earth will have become unbearable. But that demonstrates how little we know about these things. It’s only after life becomes intolerable that we consider death as an alternative. If we knew what the Lord has in store for those who love Him we’d want to get there as quickly as possible.

For many, life is relatively pleasant and not understanding the alternative we can’t imagine how anything else could be better. But as Paul told the church in Corinth, “No eye has seen, no ear has heard, no mind has conceived what God has prepared for those who love him.” (1 Cor. 2:9) We’re not taught to think about it, so we don’t. But Paul’s next sentence says, “But God has revealed it to us by His Spirit.” (1 Cor. 2:10) Ask Him to reveal it to you so you can get a glimpse of what’s in store. It’ll blow your mind!

All that not withstanding, the Bible clearly commands us to ask for and expect healing from our physical and mental anguish. But it never promises immortality. (It always makes me laugh when the nay-sayers point to the death of a faith healer as proof that God doesn’t answer prayers for healing.) One of the conditions of life as we know it is that it’s temporary. The first death, the death of the body, is assured for all but those believers alive at the time of the Rapture of the Church. We’re not privy to the details concerning the span of our earthly life, but we are told that within that span if we suffer illness we are to gather other believers around us, confess our sins, and ask for healing. And our prayers offered in faith will make us well, for the prayers of righteous people are powerful and effective. (James 5:15-16) Maybe we’ll even be blessed enough to receive the perfect healing. Selah.