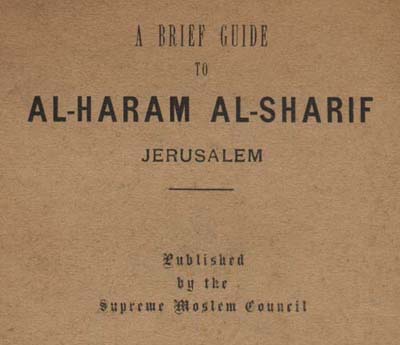 One of the most disturbing end times propaganda being promoted today is the absurd notion that the Jews never had a presence on the famous Temple Mount area in Jerusalem. Anyone who is knowledgeable about history and aware of the recent archaeological discoveries on the Temple Mount area over the years knows that the propaganda being perpetuated by the Islamics, United Nations, and other ungodly organizations is simply a political ploy to deny the Jews their historical capital of Jerusalem and the sacred Temple Mount area. The Temple Mount area is the holiest place in Judaism and the remnants of the Second Temple area visible in the form of the “Wailing Wall” where religious Jews flock from around the world in order to pray near the site of the First and Second Temples. Some of the outstanding quotes from the official Temple Mount Guide are as follows:

“The site is one of the oldest in the world. Its sanctity dates from the earliest times. Its identity with the site of Solomon’s Temple is beyond dispute. This, too, is the spot, according to universal belief, on which David built there an altar unto the Lord, and offered burnt offerings and peace offerings” (2 Samuel 24:25). But, for the purposes of this Guide, which confines itself to the Muslim period, the starting point is the year 637 A.D.

“…It dates probably as far back as the construction of Solomon’s Temple. According to Josephus, it was in existence and was used as a place of refuge by the Jews at the time of the conquest of Jerusalem by Titus in the year 70 A.D.”

“which was believed in medieval times to have been associated with Jesus Christ’s infancy. This belief was prevalent long before the advent of the Crusaders…”

Despite the recent archaeological discoveries such as coins, temple vessels, the pool of Shiloam, and many other biblical artifacts the Islamic community has simply dismissed these findings and continued on with their blatant lies about the Temple Mount and the Jews never having a presence there. This is despite the fact that the Bible mentions Jerusalem over 700 times in the scriptures while the koran never once mentions Jerusalem. In fact, I was recently made aware of twenty interesting facts about the current Israeli and Palestinian issue that I would like to share with you. I received these facts from an email I received recently. Here is the list:

2. Arab refugees in Israel began identifying themselves as part of a Palestinian people in 1967, two decades after the establishment of the modern State of Israel.

3. Since the Jewish conquest in 1272 BC, the Jews have had dominion over the land for one thousand (1000) years with a continuous presence in the land for the past 3,300 years.

4. The only Arab dominion since the conquest in 635 lasted no more than 22 years.

5. For over 3,300 years, Jerusalem has been the Jewish capital. Jerusalem has never been the capital of any Arab or Muslim entity. Even when the Jordanians occupied Jerusalem , they never sought to make it their capital, and Arab leaders did not come to visit.

9. Arab and Jewish Refugees: in 1948 the Arab refugees were encouraged to leave Israel by Arab leaders promising to purge the land of Jews. Sixty-eight percent left (many in fear of retaliation by their own brethren, the Arabs), without ever seeing an Israeli soldier. The ones who stayed were afforded the same peace, civility, and citizenship rights as everyone else.

10. The Jewish refugees were forced to flee from Arab lands due to Arab brutality, persecution and pogroms.

12. Arab refugees were INTENTIONALLY not absorbed or integrated into the Arab lands to which they fled, despite the vast Arab territory. Out of the 100,000,000 refugees since World War II, theirs is the only refugee group in the world that has never been absorbed or integrated into their own people’s lands. Jewish refugees were completely absorbed into Israel, a country no larger than the state of New Jersey …

13. The Arab-Israeli Conflict: the Arabs are represented by eight separate nations, not including the Palestinians. There is only one Jewish nation. The Arab nations initiated all five wars and lost. Israel defended itself each time and won.

14. The PLO’s Charter still calls for the destruction of the State of Israel. Israel has given the Palestinians most of the West Bank land, autonomy under the Palestinian Authority, and has supplied them.

15. Under Jordanian rule, Jewish holy sites were desecrated and the Jews were denied access to places of worship. Under Israeli rule, all Muslim and Christian sites have been preserved and made accessible to people of all faiths.

16. The UN Record on Israel and the Arabs: of the 175 Security Council resolutions passed before 1990, 97 were directed against Israel.

18. The UN was silent while 58 Jerusalem synagogues were destroyed by the Jordanians.

19. The UN was silent while the Jordanians systematically desecrated the ancient Jewish cemetery on the Mount of Olives.

20. The UN was silent while the Jordanians enforced an apartheid-like a policy of preventing Jews from visiting the Temple Mount and the Western Wall.