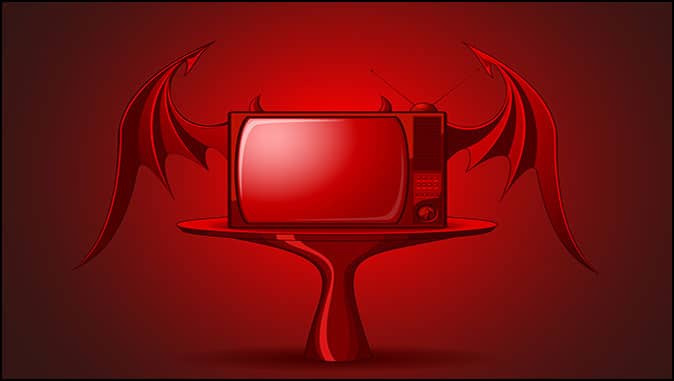 Wickedness Before Our Eyes
By Joy Lucius

I don’t know about you but finding a movie to watch as a family (or alone, for that matter) is almost impossible.

Between profanity, nudity, sexual innuendos, extreme violence, historic revisionism, the ever-present LGBTQ characters, and storylines, as well as obvious and flagrant pandering to every Leftist agenda known to mankind, clean and decent movies are pretty much nonexistent.

Maybe it is the teacher in me, but I am angered by the hidden, insinuated agendas and messages within so many movies. Every religion on the face of the earth is acknowledged and honored in films, except for Christianity. We are always portrayed in the most negative way possible, even mentioning the actual name of Jesus is totally taboo on primetime television.

Subsequently, I rarely ever watch a movie in its entirety. Many times, I barely make it through the first few scenes before giving up with a sigh of defeat. Even despite a good, clean movie synopsis, accompanied by a decent rating, most movies tend to cross the line of basic moral decency.

In fact, we simply do not go to the theater anymore. We have wasted way too much money and time on movies that we never finished watching. It is a running joke in our family that I have walked out on more movies than I’ve actually watched.

Believe me when I say, I do not think I am holier than thou. That is NOT the issue. I love literature, movies, and the art of storytelling probably better than anyone I know. I also realize that I have no stones to throw for I am the greatest of sinners. But I serve the greatest One, and He lives in me. He is adamant about what He will and will not watch.

So, I must admit that I was really excited to learn that one mainstream channel had begun bleeping out all the profanity in their primetime movies. I decided to see for myself if this was true.

As I watched a well-known movie from a few years back that was basically a political thriller, I was impressed. I completed the entire movie without having to endure one single profane word. Wow. What a treat to just sit and watch a movie with an interesting plotline and good acting without being subjected to garbage being spewed out of the mouth of the movie’s characters.

In fact, I was so impressed that a few days later, I decided to watch another movie of a similar genre, another political thriller. Great storyline, check. Great actors, check. And every single profane word was bleeped out, even the least offensive terms. My viewing was going great!

Then, with less than a third of the movie to go, during one of the pivotal scenes of international espionage and suspenseful intrigue, one of the main characters slammed his fist down on a table in frustration and cursed the Lord. He loudly took God’s name in vain right there in the most crucial scene of the movie.

I was shocked! Beyond shocked, really. I was mad! I quickly turned the television off, I fumed. How in the world could this or any network imagine that every four-letter profane word in the world deserved to be removed except for the one used before God’s name to literally curse Him?

How dare they curse God Almighty!

Later, when I discussed it with family and friends, I asked them the same question: Why? Why use God’s name in vain but take the time to remove all the other offensive words?

One of my friends said, “The answer is easy, Joy. It’s called evil, pure evil.”

My friend was right. We are in the midst of a war against evil, and the forces of evil recognize their one and only adversary is God.

The Bible puts it this way in Ephesians 6:12, “For we do not wrestle against flesh and blood, but against the rulers, the authorities, against the cosmic powers over this present darkness, against the spiritual forces of evil in the heavenly places.”

With that truth in mind, it should not have been a shock to me that the spiritual forces of evil would revel in the blatant act of cursing God Most High. But I was!

The whole experience has been a glaring reminder that I am definitely in the world but not of it. Accordingly, while we reside here in this world, we are to daily put on the entire armor of God and fight the good fight of faith.

As believers, I think we forget sometimes that the objective of our fight is to share God’s merciful loving plan of salvation and redemption with as many people as possible. That’s the real battle plan

It is definitely more than just turning off the television. It means tuning in to the Voice of God, heeding His directions, and doing whatever He calls us to do, whenever He says to do it. After all, turning off the TV is not an earth-shaking, life-altering decision – or is it?

The Bible and Self Development

I’m Not Ministering Overseas, and That’s Okay By Hannah Meador "But you will receive power…

Happy New Year By Jack Kelley Rejoice in the Lord always. I will say it…