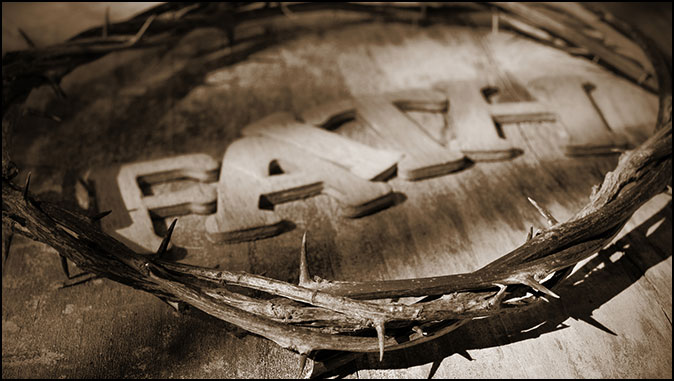 Where Is Jesus In All This?
By Grant Phillips

My wife and I enjoy watching a movie in the evening, especially those that glorify Jesus Christ, but I have begun noticing a trend that is disturbing. For example, we watched a great movie the other night, and noticed that the word “faith” was used over and over. So, what’s wrong with that you say? Nothing, but even though God was mentioned several times, there was no specific mention of Jesus, except one time Jesus’ title as “Christ” was used from a quote in a letter. I’ve noticed this trend in other movies as well.

I’ve also noticed that the world at large very often speaks of faith, whether it be a politician, well known celebrity, etc. It seems that faith has become the politically correct terminology for superficial Christianity. Most everyone says they have faith, but faith in what or in whom?

As I watch several good religious movies one thought keeps coming back to me. It appears to me that Satan is promoting a subliminal message in good, decent movies that we don’t need Jesus. All we need is faith. Has it (faith) just become a byword people use to impress others?

There is certainly nothing wrong with having faith. We need faith if we wish to be saved. We must exercise faith in Jesus to be born again. (John 3:3) Here is how the Bible defines “faith.”

Without true faith in Jesus, we cannot be saved. My concern is that we are placing more emphasis upon our faith than upon the grace of God that provides salvation. Salvation of our soul is found in the death, burial and resurrection of Jesus Christ. Yes, our faith must be applied, but it is grace that reaches out and saves us. Faith in Jesus gives us eternal life because of His grace.

“For by grace you have been saved through faith, and that not of yourselves; it is the gift of God, not of works, lest anyone should boast. For we are His workmanship, created in Christ Jesus for good works, which God prepared beforehand that we should walk in them.” (Ephesians 2:8-10)

Notice that we are saved BY GRACE and it is THROUGH FAITH. It (salvation) is a GIFT, NOT of WORKS, lest any of us should boast about our faith.

Some may argue that I am just being “picky,” but I beg to disagree. When we watch movies, we need to keep in mind that man wrote the script for the movies, but God wrote the Bible to give us Truth. I’m afraid we are getting to the point, and may have already arrived, that we are placing salvation upon “lip service.” In other words, the emphasis is on me instead of Him.

How much faith is needed? According to Jesus, just a spark to turn the engine and get it going.

“So the Lord said, “If you have faith as a mustard seed, you can say to this mulberry tree, ‘Be pulled up by the roots and be planted in the sea,’ and it would obey you.” (Luke 17:6)

I stated earlier that most everybody states they have faith. I ask again, “faith in what?” Faith in yourself? Faith in your church affiliation? Faith in your position in society? Faith in your so-called works? Faith in some false gospel you have latched on to? We could go on and on with this, but really, what do you mean when there is no mention of Jesus as the subject of your faith?

Our works are also important, but only after we are saved. True faith is important because it opens the door to let Jesus in. Jesus is most important because He, and only He, provides salvation by His death, burial and resurrection. That is God’s grace in action.

Real faith rests in Jesus Christ and in it we recognize we are a sinful person. We also accept that Jesus has done all the work. We just need to trust and follow Him.

We are saved by the wonderful grace of God, and shown in the following verses are faith (belief or trust), salvation and works.

Twice this verse mentions belief. True belief is faith that rests in Jesus.

“For God did not send His Son into the world to condemn the world, but that the world through Him might be saved.” (John 3:17)

Again, Jesus does the saving. By faith we come to Him, but He is the one who saves.

“He who believes in Him is not condemned; but he who does not believe is condemned already, because he has not believed in the name of the only begotten Son of God.” (John 3:18)

In this verse, belief is mentioned once and non-belief twice. Belief is faith. In this verse, in what do we believe? Our faith must be in the “name of the only begotten Son of God,” Jesus.

“And this is the condemnation, that the light has come into the world, and men loved darkness rather than light, because their deeds were evil.” (John 3:19)

We must agree with God that we are a sinner who needs to be saved. Only in that Light can God shower His grace upon us through the Lord Jesus Christ.

“For everyone practicing evil hates the light and does not come to the light, lest his deeds should be exposed.” (John 3:20)

Again, we are sinners and must come to the light (Jesus) to be saved.

“But he who does the truth comes to the light, that his deeds may be clearly seen, that they have been done in God.” (John 3:21)

The truth is in Jesus and His Word. Those who come to Him are saved.

Notice that we open the door (Revelation 3:20) by faith and we are saved by the gift that God gave, the gift of His Son, who provides the gift of salvation. Then in the last verse (21) those who believe produce works because they have come into the Light. [1] Faith (belief) opens the door. [2] Grace saves through Jesus, the Gift in verse three. [3] Works come from a new believer.

Is faith important? Of course it is important, but faith in anything other than Jesus is no faith at all. Even for those who are already saved by God’s grace, faith continues to be very important. Our faith is the stepping stone that leads us to the Savior. It is also the mechanism we use to depend upon God in our walk as a true Christian.

Has the world taken a term (faith) that God says is required for salvation and the Christian walk and totally missed the point?

“But someone will say, “You have faith, and I have works.” Show me your faith without your works, and I will show you my faith by my works.” (James 2:18)

“Examine yourselves as to whether you are in the faith. Test yourselves. Do you not know yourselves, that Jesus Christ is in you? — unless indeed you are disqualified.” (2 Corinthians 13:5)

Both of these last two verses are referring to a faith that is grounded in Jesus Christ. If we have faith, let us be certain that Jesus Christ is the object of our faith. If our faith rests in anything or anyone other than Him, it is misguided and we remain in our sins, lost and without His saving grace.

Oriented to the Lord

Oriented to the Lord By Hal Lindsey It’s the last hours of the night. You’re…

Communicating in the Age of Technology (James 1:19-22)

Give Yourself a Second Chance – God Will (Philippians 3:13)

Give Yourself a Second Chance - God Will (Philippians 3:13) By David L. Goetsch Are…

Why People Turn to Drugs and Alcohol: How You Can Help (Proverbs 20:1)

Why People Turn to Drugs and Alcohol: How You Can Help (Proverbs 20:1) By David…

Hopelessness By David L. Goetsch Hopelessness is an emotional state in which you feel trapped…