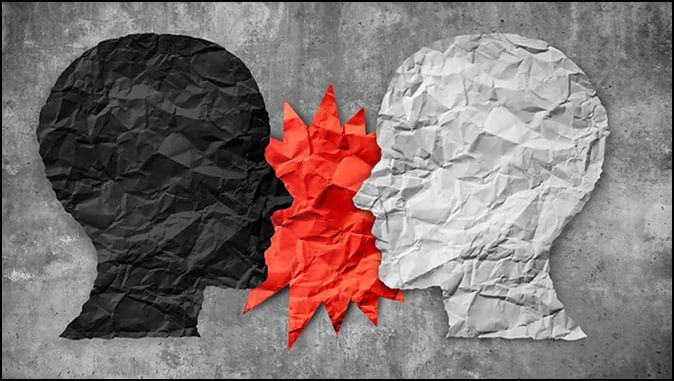 Unmasking the Persistent Demon of Racism – Part 2
By Joseph Parker

In Part 1 of this article, we looked at the truth that the answer to all the chaos, trouble, and hatred we see in our culture and world is Jesus Christ. We really need to keep our focus and trust on Him.

There is a great need for the church to acknowledge and respond to all that we see happening in our culture with prayerful humility and wisdom. It’s very unwise and prideful for us to simply respond as if we already know all there is to know about the present circumstances.

Sometimes we think we see things accurately and correctly, yet can actually be very blind and lacking in our perception of the way things truly are.

It’s not unusual to hear people say in regards to our present situation things like: “I am not a racist. I never owned slaves. Racism is real but I am not one of those guilty of it. I love all people. Racism is out there, but it’s not systemic. I don’t see color. Racism is a thing of the past.”

“I see,” said the blind man. Allow me to share some ways that systemic racism has been at play from the founding of our nation which still heavily affects our culture and society. A racism that has been and in many ways continues to be at work in perspectives, attitudes, sometimes whole systems, economics, etc.

Much can be said about the issue of racism from the founding of our nation, right up until today. One could easily conclude that so many of the noble ideals that our nation was founded upon clearly were not meant to include African Americans.

The year 2019 marks the sad four hundredth anniversary of the Maafa in our nation – the beginning of the slave trade in North America. Racism was definitely behind much of the African slave trade that involved the capture and the selling of millions of black people into slavery in our nation.

It was racism that led to many wanting to keep slavery intact. And this same mindset and perspective allowed our nation to go to war over this issue in the War Between the States.

After the war ended and Reconstruction began, some strides and attempts were made to help the freed slaves to begin to live normal lives as free people in our nation. However, many people in the culture refused to see African Americans as equals. And many were indignant at the idea of them being considered equal to people of the white community.

A program that came to be referred to as “Forty Acres and a mule,” was designed to redistribute land that had been owned by Southerners and former slaveholders. The program would have given this land to former slaves and thus give them the opportunity to begin to help themselves to become self-sufficient. Land ownership was an initial and very important step for former slaves to become empowered and independent.

However, after President Abraham Lincoln was assassinated, President Andrew Johnson stopped the program. He ordered the land in the south to be returned to its former owners.

The land that was regained by the southern white community was passed down to their children. So land that could have been justly given to former slaves to begin to help themselves rise from the social and economic devastation of slavery, was not given to them.

The former slaves, for a short time, were allowed to serve in government in the South and given the right to vote. Sadly, after the Southerners regained political power near the end of Reconstruction, extremely racist Jim Crow laws were passed that took many freedoms and opportunities that had been gained by the former slaves away.

There were many schools, public and private, that would not allow black people to attend. Many restaurants would not serve black people. Some would serve them, but black people had to go to the back door to be served.

A few contemporary movies have sought to illustrate some of these sad realities from Jim Crow laws. Movies such as Red Tails (the Tuskegee Airman), 42 (The Jackie Robinson Story), Hidden Figures, (black women who behind the scenes worked for NASA), Selma (Dr. Martin Luther King, Jr.) and many others.

In summary, we, the church of Jesus Christ, need to assess the reality of racism, its history, and residual effects, as well as its ongoing presence.

We should not make excuses, but in humility repent for ourselves and yes for our forefathers who did wrong and for those who continue to practice racism to this day.

We would be wise to repent like Nehemiah (Nehemiah 1:5–11) asking for forgiveness as a nation. And again, like Nehemiah, say in the humility and love of Jesus Christ, “Come let us build…” Let us build a foundation that reflects truth, justice, and righteousness – for all people.

One final word of encouragement that I wish to share with believers. In love, be a bridge-builder. Build relationships across racial lines. Seek to better understand those who are different from you.

It’s unwise to decide that you understand most, if not all, the issues fueling racism. No one fully understands all the issues involved with this but God. The rest of us need a lot of help.

May it be one goal of every believer reading this to pray and ask, “Lord, what do you want me to do to help address this issue and help solve it?” May another goal be to spend time getting to know and care about someone across racial lines. You just might learn some things that will help you to be Jesus to them.

Two Roads, Two Gates, One Goal A Bible Study by Jack Kelley “Enter through the…

To Love Is to Obey

Demonic Curses Against the Mind

Why Serve God? Dr. John Oswalt "I have always loved you,” says the LORD. But…

Surprised by a Prodigal

Surprised by a Prodigal By Anne Reed Several years ago while in Indiana Amish country,…