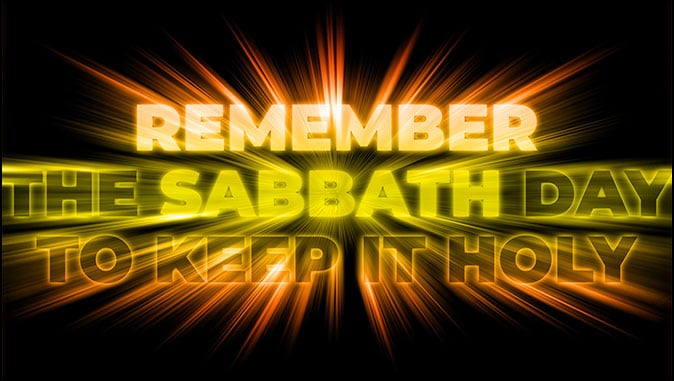 The Sabbath – A Gift From God
Dr. Jerry Newcombe

One of the saddest things I saw on Easter Sunday was Amazon delivery trucks on the road. Having to work on Sunday is bad enough, but Easter?

Amazon drivers face many other challenges as well. MSN.com reports (4/4/21) that the E-commerce giant finally acknowledged that some of their drivers are under stress where they can’t even take proper bathroom breaks. But enough about Amazon.

Violating the Sabbath principle is not healthy for society nor for us as individuals. God rested after His creation. He commands us to rest for a day a week.

Sunday as the Lord’s Day is even found in the U.S. Constitution. Article 1, Section 7 specifies:

“If any Bill shall not be returned by the President within ten Days (Sundays excepted) after it shall have been presented to him, the Same shall be a Law, in like Manner as if he had signed it, unless the Congress by their Adjournment prevent its Return, in which Case it shall not be a Law.”

In other words, says Dr. Daniel Dreisbach of American University, an author on the influence of the Bible on our Founding Fathers, “The President is given ten days in which to consider whether to veto a bill or not, Sundays excepted…excluding the Lord’s Day.”

God made the Sabbath – a day off – for our benefit. We violate the principle to our own detriment.

I remember seeing years ago a documentary segment on CNN where they interviewed Truett Cathy, the founder of Chick-fil-A, and they gave him a hard time for being closed on Sunday. He said that he did this to honor God’s command. But he noted that a side benefit arose from this. The company was able to attract some of the best and brightest personnel in the fast-food business to work for them. The company has risen to be the third-highest grossing food chain in America, despite being closed 52 days a year more than its competitors.

Throughout history, various leaders honored the Sabbath principle. For example:

• Church historian, Philip Schaff, in History of the Christian Church, wrote of British King Alfred’s legal reforms, “His code is introduced with the Ten Commandments and other laws taken from the Bible…it protects the laboring man in his Sunday rest.”

”November 15, 1862,“The President, commander-in-chief of the army and navy, desires and enjoins the orderly observance of the Sabbath by the officers and men in the military and naval service. The importance for man and beast of the prescribed weekly rest, the sacred rights of Christian soldiers and sailors, a becoming deference to the best sentiment of a Christian people, and a due regard for the Divine will, demand that Sunday labor in the army and navy be reduced to the measure of strict necessity.”

“On Sundays, Cook’s usual captain’s inspection was always followed by a religious service. Cook appeared on deck and the drum beat the retreat. Men fetched stools from below and brought chairs for the officers. The bell was tolled and the church pendant was hoisted at the gaff. Cook conducted the service on the quarterdeck, with a Bible and a prayer book in front of him, placed on a cloth draped over the compass box. A lesson was read, a hymn sung.”

Not all governments have appreciated the gift of the Sabbath. Walter Grab, the author of The French Revolution, writes:

“At the suggestion of the deputy Romme, the Convention voted on 5 October 1793 to abolish the Christian calendar and introduce a republican calendar…Weeks were replaced with periods of ten days (decades) so that the Christian Sunday would disappear.”

Napoleon later restored the Christian calendar, including the “Christian Sunday.”

My dad once told me about an executive he knew who died relatively young, presumably from overwork. The man was so busy that he would take his Christmas cards with him that he had received the previous winter to the beach the next summer in order to try and keep up with his correspondence.

Dr. Richard Swenson, a medical doctor who authored Margin: Restoring Emotional, Physical, Financial, and Time Reserves to Overloaded Lives, notes, “Life is a journey, but it is not a race. Do yourself a favor and slow down…God never intended for time to oppress us, dictating our every move.”

The early Christians worshiped Jesus on Sunday because that’s when He rose from the dead. Every Sunday is a reminder of Easter Sunday. It’s sad enough to see commerce on Sunday; it is sadder to see it on Easter Sunday itself.

The Sabbath is a gift from the Creator – a day of rest, for our benefit. We cast it aside at our own peril.