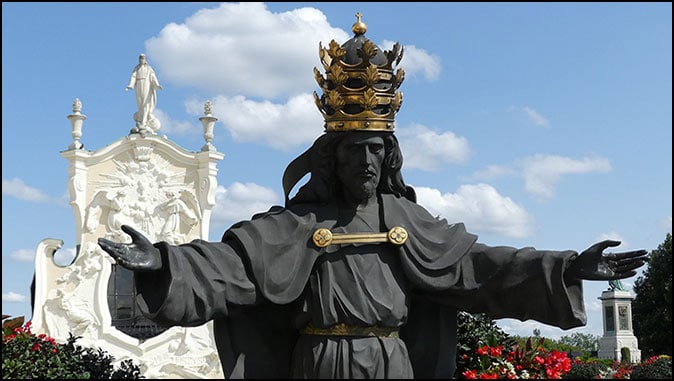 The King is Coming
By Jordan Chamblee

I am a huge fan of The Lord of the Rings by J.R.R. Tolkien, and I consider Peter Jackson’s The Return of the King to be the best movie ever made in the history of mankind. Don’t try to argue otherwise, I won’t change my mind on that. There are so many incredible scenes in that film, it is difficult to pick a favorite, but one scene stands out to me as an apt depiction of the gospel being preached to the political powers of our world.

In this story, the long-exiled King Aragorn is returning to his kingdom Gondor. Heralding his imminent arrival to the royal city is the wizard Gandalf and the Hobbit Pippin. The kingdom has been under the watch of the Steward for many years, so long in fact that he no longer regards Aragorn as the rightful king.

“I tell you now,” answers the Steward coldly to Gandalf’s message, “I will not bow to this ranger from the North; last of a ragged house long bereft of lordship!”

“Authority is not given to you to deny the return of the king, Steward,” replies Gandalf sternly.

At this, the Steward stands in arrogance, his voice a rebellious growl. “The rule of Gondor is mine! And no other’s!”

I get chills every time I watch that scene. What an incredible depiction of how the powers of the world often respond to the message of the Christian.

This is the gospel to Presidents, Prime Ministers, Kings, Dictators, and war-lords: The King is coming.

When we read the Word of God, we find that it does not mince words when it comes to the claims and demands of Jesus Christ. It will not cut it for worldly authorities to try to maintain their little kingdoms. It is not alright for them to treat Christ with cool indifference. It is not enough even for them to treat Him “fairly”, allowing Christians to worship in peace while simultaneously telling themselves that they are in charge. They must surrender to Him fully.

These are the words of God to His Son regarding His claims to absolute authority.

“I will declare the decree: The Lord has said to Me, ‘You are My Son, today I have begotten You. Ask of Me, and I will give You the nations for Your inheritance, and the ends of the earth for Your possession. You shall break them with a rod of iron; You shall dash them to pieces like a potter’s vessel’” (Psalm 2:7-9).

In light of the above, what is demanded of the rulers of this world?

“Now therefore, be wise, O kings; be instructed, you judges of the earth. Serve the Lord with fear, and rejoice with trembling. Kiss the Son, lest He be angry, and you perish in the way, when His wrath is kindled but a little. Blessed are all those who put their trust in Him” (Psalm 2:10-12).

As Christians blessed to live in a country where we can have an active part in our government, this should be our message to every one of our leaders: “Authority is not given to you to deny the return of the King, Steward.”

The King is coming, and He is going to put right every wrong and lay low all who set themselves up in pride against Him. This is the Man who wrestled with Death and won. This is the Word that commanded the universe to exist. This is the Warrior whose words are like powerful swords, and whose white robe is stained with the gore of vanquished foes. Blessed are all those who put their trust in Him.

Make Me Like Al By Dr. Mike Murphy There are days in each of our…