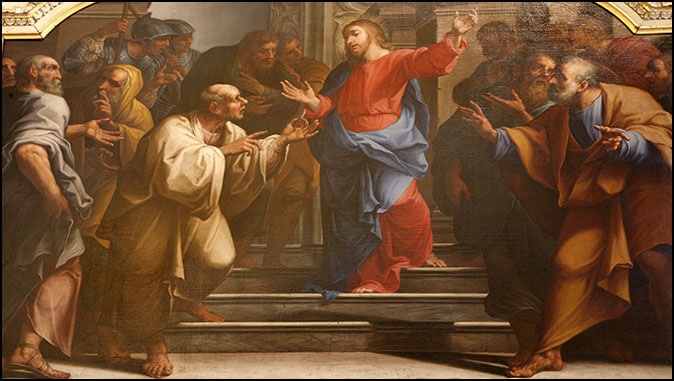 The Faith of a Pharisee
By Jonathan Lewis

The Pharisees were a self-righteous lot, so wrapped up in their legalistic, self-satisfied ways that they missed what God was doing right in front of them.

Even so, we have one instance recorded in Scripture when they actually got something right. Well, perhaps not “right” because their motives were all wrong (they were Pharisees, after all!), but still, I think we can learn something from them.

Perhaps you’re wondering what we can possibly learn from a Pharisee. The answer may surprise you. I want us to learn from their faith.

At the beginning of Mark 3, we find the fascinating account of Jesus healing the man with a withered hand:

And he entered again into the synagogue; and there was a man there which had a withered hand. And they watched Him, whether He would heal him on the sabbath day; that they might accuse Him. (Mark 3:1-2).

In the previous chapter, Jesus had already disputed with the Pharisees about proper observance of the Sabbath. Now they’re facing off again about the same issue. This time the question is whether it’s lawful to heal a man on the Sabbath or not. The Pharisees believe not. Jesus knows differently.

The Sabbath, however, isn’t what I want to draw your attention to today.

Instead, I want you to notice the faith of these Pharisees.

We see it clearly right there in Mark 3:2: “And they watched Him, whether He would heal him on the sabbath day . . .”

Did you catch it? The Pharisees were watching and waiting to see if Jesus would perform a miracle.

I believe these Pharisees understood two things about Jesus.

First, they understood His capabilities. They knew He had the power and ability to heal this man with the withered hand. They weren’t waiting to see if He could. They knew He could if He chose to do so. They were fully persuaded of His power.

They also understood His character. They knew it was like Jesus to heal people. They knew it would be consistent with who He was to reach out and heal this man.

And so, fully persuaded of both His character and capabilities, these Pharisees sat in anticipation, waiting for the miracle they knew was likely to occur. So great was their confidence that they were literally waiting for Jesus to do the miraculous. Yet despite this, their motives were filled with hostility and hate.

Take a moment to get your head around that fact. Instead of waiting for a miracle so they could glorify God and rejoice with a fellow human being, they were waiting for Jesus to do the miraculous so they could accuse Him of breaking the law!

That boggles my mind.

But despite their messed up intentions, I have to hand it to these Pharisees—they had more faith in Christ than many Christians have.

Don’t get me wrong. They didn’t have saving faith. They understood Christ’s character and capabilities and had confidence in both His ability and willingness to work a miracle, but they didn’t trust Him for the salvation of their souls.

But these unbelieving, self-righteous, hypocritical Pharisees had absolute confidence in what Jesus could do.

And they were waiting for it.

That sense of anticipation—perverse though it was—captures my attention. I want to have the same sense of expectation when things look bleak—a faith so deep and real that I’m just waiting to see what God will do.

Of course, I don’t want the motives of these Pharisees—but I do want their unquestioning confidence.

Why is it that we, as God’s people, often lack that sense of anticipation? That hopeful expectancy of God’s imminent working? Why don’t we have the same degree of confidence in our Savior’s power and love as these lost Pharisees? Why do we find ourselves in the midst of a crisis and act as if there’s no hope? Why don’t we wait for the miracle?

I’m not saying that God will always intervene in miraculous ways to solve our problems. But we know He’s able to, and we know He has a tremendous love for His children. And so it’s never wrong to wait on Him in hopeful anticipation. In fact, I have to wonder how often we don’t see His miraculous hand for the simple reason that we’re not expecting to.

I’m reminded of Matthew 13:58: “And He did not many mighty works there because of their unbelief.”

We all face struggles and troubles in our personal lives. It may be a financial issue, a health challenge, or a family problem. We’re also facing troubled times as a nation—we desperately need to see God move in our land.

How and when God intervenes in miraculous ways is ultimately up to Him. But when we’re facing a crisis and realize that only a miracle can save us, it’s never wrong to wait in hopeful anticipation that Christ will work.

After all, like the Pharisees, we know His character and His capabilities. But unlike them, we also understand His love and the tender heart of compassion our Father has toward His children.

If the Pharisees can wait and watch for the miracle, surely we can, too.

So let’s wait and watch and see what God will do.

What Young Christians Need to Prepare For Now