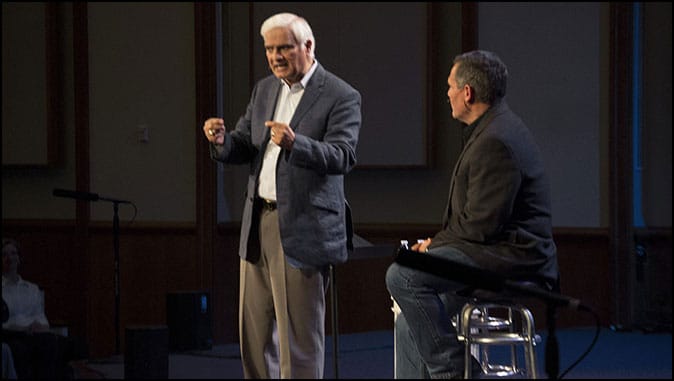 The Dark, Double life of Ravi Zacharias
By Julio Severo

The high-profile, Reformed apologist and minister Ravi Zacharias led a double life in which he sexually abused massage therapists, according to a scathing, in-depth report from a law firm hired by his own ministry.

The Indian-American Reformed apologist died aged 74 in May 2020 from cancer, after denying the allegations first made public in 2017 by a former follower, Lori Anne Thompson and her husband.

Zacharias’ books have been favorite among Reformed apologists for decades and Ravi Zacharias International Ministries (RZIM) operates in 15 countries with 300 staff.

Then-Vice President Mike Pence spoke at his memorial service, lauding him as a great expository preacher.

But on February 11, 2021 Atlanta-based law firm, Miller and Martin, hired by RZIM, released a report where they claimed that he lied in 2017 when he claimed “I have never engaged in any inappropriate behavior of any kind.”

The report found that five massage therapists had claimed he touched them inappropriately, and one said she was raped.

Investigators searching Zacharias’ mobile devices said they found more than 200 photographs of younger women, including nude images of a salon employee in Malaysia, as reported by AP.

The RZIM board issued a four-page response on February 11, 2021, where they apologized to staff who had questioned Zacharias and were rebuffed or punished, and to the Thompsons for the years that “they were slandered… and their suffering was greatly prolonged and intensified.”

The board apologized for earlier statements that belittled accusers and pledged steps to support victims, combat abuse and harassment, and reassess the management structure, which is overseen by Zacharias’ eldest daughter, ministry CEO Sarah Davis.

“We are devastated by what the investigation has shown and are filled with sorrow for the women who were hurt by this terrible abuse,” the board said.

Zacharias was a widely popular author and speaker, with many celebrities and prominent Christian leaders among his admirers.

He founded his international ministry, known as RZIM, in 1984, with a mission to engage in “Christian apologetics” — defending Christianity with Reformed intellectual arguments.

The law firm said more than 50 people, including more than a dozen massage therapists, were interviewed, and investigators were able to access data from four mobile devices used by Zacharias.

Zacharias committed the alleged abuses to a large and yet unknown number of women over the course of more than a decade, the 12-page report by Ravi Zacharias International Ministries said.

The report not only confirmed the allegations of abuse at the day spas (which Zacharias owned), but also found evidence that Zacharias had abused women in Thailand, India and Malaysia. They also found that he’d received hundreds of images of young women, that he lied about not being alone with women besides his wife and daughters — who he kept on a separate wireless plan than RZIM — and used tens of thousands of ministry “humanitarian effort” funds to support four massage therapists. One of the massage therapists told investigators that “after he arranged for the ministry to provide her with financial support, he required sex from her,” in a transaction which she called rape.

It is hard to understand why a Christian minister would need a SPA with massages as such places sometimes cover up activities involving prostitution. But Zacharias had two SPAs.

Zacharias used RZIM’s discretionary fund, called “Touch of Hope,” to pay for much of his indiscretion, according to the law firm’s report.

The apologist also used several phones and kept numerous private email addresses, none of which were accessible to RZIM. He argued at the time he did so for “security reasons.”

“The end result,” the report stated, “was that no one at RZIM would have had administrative access to his devices or email communications.”

Of the massage therapists investigators interviewed, several said Zacharias would touch his genitals and/or ask them to touch them while they were conducting massage sessions. Five claimed he “touched or rubbed them inappropriately,” including on their breasts and genitals.

The investigation also led to the discovery of a host of explicit photos — many of women much younger than the apologist — in Zacharias’ possession. A review of his four phones found Zacharias engaged in numerous “text- and email-based relationships with women who were not his wife.” Investigators also found “over 200 ‘selfie’-style photographs of women.”

Reformed apologists often see themselves as morally superior to other Christians, whom they attack, and see the Reformed (Calvinist) theology as above any other theology. Usually, they mention any sex scandal among charismatics and Pentecostals as “evidence” that they have a bad theology. It is not known how they will mention sex scandals in one of their main apologists.

Actually, the apologist who defended that he knew the Supreme Truth wanted no one to know truths about him and his behavior that contradicted the true Christianity. He was in a state of slavery to sexual sins needing spiritual deliverance, not leadership in a ministry.

Despite of the bad news, there is good news. RZIM eventually recognized that there was a serious problem. Partially, their statement says:

Following allegations made in late August of 2020 that Ravi had engaged in sexual misconduct and abuse in connection with two day spas, we commissioned Miller & Martin PLLC, a law firm with experience in corporate and sex crimes investigations, to conduct an independent investigation.

To be victimized by unwanted sexual contact, advances, and behavior is horrendous. It is diametrically opposed to everything we believe about the value and dignity of every single person. We believe not only the women who made their allegations public but also additional women who had not previously made public allegations against Ravi but whose identities and stories were uncovered during the investigation. Tragically, witnesses described encounters including sexting, unwanted touching, spiritual abuse, and rape. We are devastated by what the investigation has shown and are filled with sorrow for the women who were hurt by this terrible abuse.

We are shocked and grieved by Ravi’s actions. As Ravi Zacharias was the founder of our ministry and the leader of our staff, community, and team, we also feel a deep need for corporate repentance.

As followers of Christ who passionately believe that every person bears the image of God, we detest any sin of abuse. We now know based on the investigation that Ravi engaged in a series of extensive measures to conceal his behavior from his family, colleagues, and friends.

We regret that we allowed our misplaced trust in Ravi to result in him having less oversight and accountability than would have been wise and loving. We also regret the ways that many of us have publicly extolled Ravi’s character and the impact this will have had on victims of his abuse. We now know our words have been hurtful, and that causes us deep sorrow. Moreover, in the wake of the accusations brought against Ravi by the Thompsons in 2017, we communicated our confidence in Ravi’s denial of these accusations, and others trusted Ravi because they trusted us. Through our failure, we made it more difficult for victims to come forward. This grieves us intensely and makes us so thankful that the truth has ultimately been revealed.

The findings of this investigation have convinced us more than ever of the necessity and sufficiency of the gospel. No one is without the need for a savior. Sin resides in the heart of every human being. Jesus is the only person who is exactly who he says he is and the only savior worthy of our ultimate trust and worship. Jesus is fully committed to truth and to justice, and he unqualifiedly stands with victims.

Our Legacy By Dr. Mike Murphy What do you see as your legacy? What have…

Psalm 91: Protection Amid the Storm

Psalm 91: Protection Amid the Storm By Joseph Parker He who dwells in the secret…

Now Is the Time to Let Your Light Shine

Now Is the Time to Let Your Light Shine By Dr. Michael Brown For many…

Bad News: No Perfect Church to Imperfect People By Julio Severo A usual complaint from…