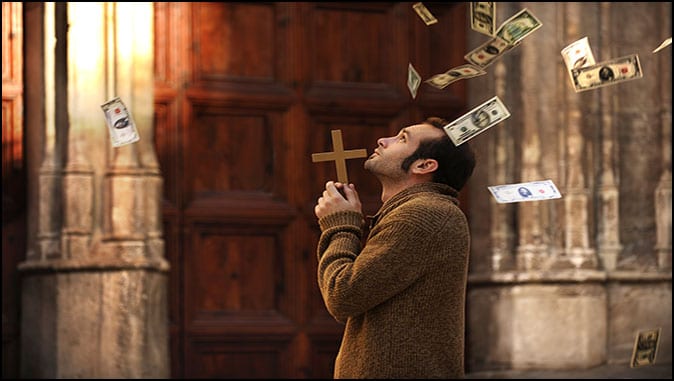 The Advent Of The Laodicean Church
By Jack Kelley

One thing that the so-called emerging church fails to understand is that when the Lord evaluates our relationship, He’s most interested in our attitude toward Him, not the results of our efforts on His behalf.

The churches of Revelation 2 and 3 have often been described as a chronology of the Church age. The final one is the Church at Laodicea. Its emergence is another sign that the end is near. Let’s read about it.

“I know your deeds, that you are neither cold nor hot. I wish you were either one or the other! So, because you are lukewarm—neither hot nor cold—I am about to spit you out of my mouth. You say, ‘I am rich; I have acquired wealth and do not need a thing.’ But you do not realize that you are wretched, pitiful, poor, blind and naked.” (Rev. 3:15-17)

One thing the emerging (not emergent, that’s the name of one such organization) church with its social gospel fails to understand is that when the Lord evaluates our relationship, He’s most interested in our attitude toward Him, not our efforts on His behalf. He made that clear in his criticism of the Church in Ephesus way back at the beginning.

“I know your deeds, your hard work and your perseverance. I know that you cannot tolerate wicked men, that you have tested those who claim to be apostles but are not, and have found them false. You have persevered and have endured hardships for my name, and have not grown weary. Yet I hold this against you: You have forsaken your first love.” (Rev. 2:2-4)

While some claim it’s to produce followers of Christ, not just believers in Him, the driving force behind the emerging church is really growth and prosperity. That’s why it’s so popular. So-called seekers don’t come through the doors of the church looking to become followers of Christ. They come to belong to something bigger than themselves, where they can be entertained and feel better about themselves by doing some good works without being made to feel guilty or having to commit to anything. If they wanted to be more like Jesus they’d have come to a place where they could focus on the Bible, and experience some intimate worship, the kind that makes the heart break, the tears flow, and the knee bend.

When you ask its leaders how the movement is working they’ll quote statistics like “participation on an average weekend” as if the more people they bring through the doors, the more pleasing to God they must be. Then they’ll tell you how many ministries they’ve got going. Some even print current revenues in their bulletins, I guess to show how good sales are, like a business would. There is little or no discussion of baptisms or new believers, because that’s not the point. Preaching a gospel message with an altar call would actually be counter-productive to their strategy. More money in the offering requires more people in the pews. And that requires less gospel in the message.

The fact that all this money is mostly put to good use is laudable, but the Lord judges us by the motives of our hearts, not the works of our hands. He actually condemned the Church at Ephesus even though they were hard working, faithful, and true. He condemned them because in their efforts to serve the King they left no time to work on their relationship with the King.

A comparison of the message to the Laodicean Church with the other end times Church, the one at Philadelphia, also speaks volumes.

To Laodicea, He said, “I know your deeds, that you are neither cold nor hot. I wish you were either one or the other! So, because you are lukewarm—neither hot nor cold—I am about to spit you out of my mouth. You say, ‘I am rich; I have acquired wealth and do not need a thing.’ But you do not realize that you are wretched, pitiful, poor, blind and naked.”

To Philadelphia, it was, “I know that you have little strength, yet you have kept my word and have not denied my name. Since you have kept my command to endure patiently, I will also keep you from the hour of trial that is going to come upon the whole world to test those who live on the earth.”

Don’t kid yourself into thinking that the Lord needs us to help build His Kingdom. That would be like me saying I need my 3 year old to help fix the leaking faucet. When they asked what work God required of them Jesus didn’t say “Do for the One He has sent,” He said “Believe in the One He has sent.” (John 6:28-29) What you do after that is between you and the Lord, but unless you get first things first, nothing else matters. You’ll be lukewarm at best.

Did God Really Say? By Jack Kelley "I will destroy the wisdom of the wise;…