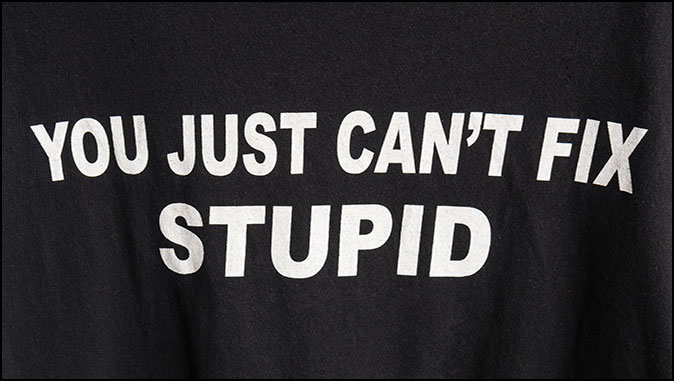 Stupid Is As Stupid Does
By Grant Phillips

The Mrs. and I had scrambled eggs, oranges, tomatoes, grapes, apple sauce and strawberries for breakfast this morning. While I was munching I kept looking at the food and thinking about how God created all this. Each had its own eye appeal, taste, texture, health benefit, etc. Also, each year strawberries are always strawberries, and tomatoes are always tomatoes. The hen doesn’t lay oranges or apple sauce (their cousins drop that on my truck). Could that have something to do with God using the term, “after its kind” over fifty times in the Bible? Ya think?

Well of course then I got to thinking about those dear folks who refuse to give God any credit for creation. For that matter, they won’t even acknowledge His existence. Then “stupid is as stupid does” came to mind. It really makes you want to slap some sense into them. Just kidding. Anyway, God has apparently given them a thought also.

“The fool has said in his heart, “There is no God.” They are corrupt, They have done abominable works, There is none who does good.” (Psalm 14:1, basically repeated in Psalm 53:1)

Seriously, any dear lost soul who would buy in to evolution, the big bang theory, and all the other nonsense the world regurgitates can’t be the sharpest knife in the drawer. How can they possibly believe their ancestors were deposited from the ocean, on a beach, billions of years ago as primordial slime? Question: Who made the ocean, the waters, the beach, and even the slime?

God says in Genesis 1:24-25 that He created all the land animals. That would include primates of course. In Genesis 1:26-27 God says He created man after His likeness, male and female (Genesis 2 details that account.) In Genesis 1:31 God said that everything He created “was very good.”

Man is the only creation of God that was created in His likeness and was created to rule over all other creation.

Evolutionists want us to believe that mankind somehow evolved over millions of years from primates into a Neanderthal type human. (They don’t say where the primates originated from…I suppose the primordial slime.)

God says when He made us, we were perfect, which also must include our appearance and intelligence level, then after we sinned, deterioration set in. Our longevity of life decreased, and our beauty faded.

Evolutionists say we evolved over millions of years from primates and just kept improving. So, in another words, we evolved as ugly homo sapiens into the beautiful and intelligent creatures we are today, according to them. What are these people sniffing, their primordial arm pits!?

And then there’s the Big Bang! That’s how it happened, said the halfwit to the moron. Now think about that for a minute folks.

Let’s say you need a place to live, so you decide to build yourself a house. Who ya gonna call, one of your primordial slime buddies or a construction company? I have an idea. Why not just pitch a tent in the front yard and wait for it all to come together on its own? You may have to wait a few million or billion years, but hey! You need a house! I hate to tell you, but I don’t think you’re going to get your house.

The point being folks is that this world and all that is within it (including people) did not just happen. There had to be a designer with the intelligence and power to make it happen.

You’ve all probably heard the example of the watch. How do you make a watch? Maybe there is an explosion in the watchmaker factory and after the dust settles, you have a finely tuned watch. If you believe that, you’re really in trouble. I think it makes much more sense to believe in a divine Creator?

All these human theories are comparable to childish beliefs, and they are just that; childish. Little children will believe almost anything. Maybe that is what makes them so precious to God. Maybe that is why Jesus said,

“But whoever causes one of these little ones who believe in Me to sin, it would be better for him if a millstone were hung around his neck, and he were drowned in the depth of the sea” (Matthew 18:6)

“But even if our gospel is veiled, it is veiled to those who are perishing, whose minds the god of this age has blinded, who do not believe, lest the light of the gospel of the glory of Christ, who is the image of God, should shine on them.” (2 Corinthians 4:3-4)

Satan blinds the eyes and closes the ears of those in the world who refuse to listen. He (Satan) fills their minds with nonsense that drives them away from the Truth. They believe Satan’s lies, because they will not accept God as God. God is our Creator and He can be our Heavenly Father if we come to Him through Jesus Christ. Otherwise, we keep believing hilarious nonsense right up until death takes us to hell. Jesus said,

“But you do not have His word abiding in you, because whom He sent, Him you do not believe.” (John 5:38)

We who are the Lord’s sheep need to pray earnestly for those who continue to believe the lie. We who are Christians were once lost until we put our faith in Jesus, our Good Shepherd. Satan is a hireling and cares not one ounce for those he is leading to hell.

Keep in mind, we are all God’s creation, but we are not all God’s children. Only those who follow Jesus Christ are in the family of God and will be with Him eternally.

Maybe someone is listening, and they are asking, “What must I do to be saved?”

The Gospel in a nutshell is:

Are We Measuring the Wrong Things?

Are We Measuring the Wrong Things? By Jonathan Lewis Have you ever noticed that kids…

Responding to Victory By Abraham Hamilton III The Christian walk isn’t a sprint, it’s a…

Godly Anger or Worldly Anger? By Jordan Chamblee It is far too easy to be…