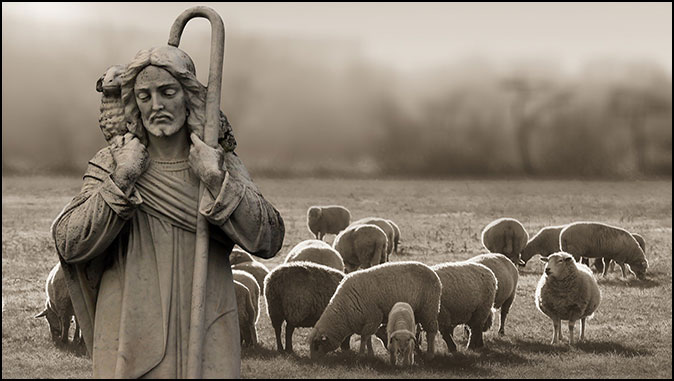 The diligent student will discover glimpses of the Messiah throughout the Old Testament. Many of these require the insight gained from the New Testament to be recognizable, but a reasonable amount of study will enable most students to give a persuasive presentation of the Messiah using Old Testament passages exclusively. This is the way Messianic believers convert their Jewish brethren, since Jews don’t recognize the New Testament’s authority as Scripture.

Perhaps their most often used passage, Isaiah 52:13-53:12, is actually the last of the four so-called Servant Songs of the Messiah. The other three are Isaiah 42:1-9, 49:1-7, and 50:4-9. These four passages present as complete a picture of the Messiah as you’ll find anywhere in Scripture, Old Testament or New.

But my favorite selection of Old Testament Messianic Scripture is the Shepherd Psalm Trilogy, Psalms 22, 23, and 24. In these three Psalms, we find the three specific roles of the Messiah, cast in terms of the Shepherd’s responsibilities.

In Psalm 22 we see a picture of the Good Shepherd, giving His life for the flock. Psalm 22 is the clearest description of what it’s like to be crucified anywhere in Scripture and is the most often quoted Psalm in the New Testament. Written by David 1000 years before the fact, it reads like a first person account of the pain and humiliation that form of punishment inflicted upon its victim. Surprisingly, it opens with the first words our Lord spoke from the cross and closes with His final ones. You have to read the Psalm in Greek to get this last tidbit, because in English the last phrase of verse 31 reads “He has done it.” But in Greek it’s is the same word John used in documenting our Lord’s last statement from the cross, translated “It is finished” in John 19:30. The Greek word in both cases is tetelestai a legal term in Jesus’ day that usually meant paid in full and was written across a paid invoice, for example. Upon his release, it was also written across the bill of charges for which a criminal had served time. The ex-convict carried this document with him as proof that he had paid his debt to society so he wouldn’t be charged with the same crime again.

Used this way, the legal implications of the Lord’s last words are staggering, and are explained in detail in Colossians 2:13-15. The bill of charges of which Jesus was convicted were actually the charges God has filed against us—our sins. With His last words, Jesus in effect declared, “Paid in full!” indicating that all our sins past, present, and future were paid for, our record exonerated, and we can never be charged with them again. “Because by one sacrifice He has made perfect forever those who are being made holy” (Hebr. 10:12-14).

By the way, some of the modern translations omit a key phrase from Psalm 22 at the end of verse 21. It’s proof that the Father had heard and answered the prayers of His Son. If your Bible doesn’t have the phrase “You have answered me” at the end of the verse, add it. It’s there in the King James and in the Hebrew interlinear. It also leads the reader from a graphic description of the most painful form of execution ever devised to a declaration of God’s faithfulness and a song of praise only possible if the One being executed was also resurrected from the dead. So this Psalm begins with the Lord on the cross and ends with His resurrection.

Psalm 23 describes our Lord’s role today as the Great Shepherd who tends His flock. It’s by far the most popular among believers and is quoted even by those who couldn’t give you another passage from Scripture if their lives depended upon it. It begins with His promise to be with us always and everywhere we go, and ends with the Rapture of the Church as He takes us to dwell in the house of the Lord forever (John 14:1-3). Psalm 23 promises that we are beyond the reach of our enemy while here on Earth, and have no cause to fear even though we find ourselves in his proximity. It is the basis for Paul’s admonition to rejoice in the Lord always (lit. without ceasing) regardless of circumstance, and thereby receive the peace that transcends human understanding (Phil. 4:4-7) as well as the goodness and mercy that are the rewards of the faithful, for “when a man’s ways are pleasing to the Lord, He makes even his enemies live at peace with him” (Prov.16:7).

In Psalm 24 the Chief Shepherd rewards His Flock. It begins with a reminder that the Earth is the Lord’s and everything in it, and ends with the Messiah in Jerusalem as King of the whole Earth (Zech. 14:9). The Lord created the Earth, He redeemed it, and He has come to take possession of it. Those with clean hands and pure hearts may now ascend to His Holy place and receive vindication and the blessing of the King of Glory. Clean hands and a pure heart are traits unknown to the human condition (Jer. 17:9). Nothing less than a complete re-creation can qualify us, but if anyone is in Christ, he is a new creation. For God made Him who had no sin to become sin for us, so that in Him we might become the righteousness of God. (2 Cor. 5:17-21).

There you have it. In His first visit to Earth, our Lord came to die for His people, to take away all our sins. His resurrection is proof that accomplished His mission. During the time since His ascension, He is keeping His people spiritually secure even though we wander in the valley of the shadow of death, until He takes us to be with Him forever. After that, He will return to Earth as the King of Glory to establish His Kingdom and vindicate and reward His people for their faith.