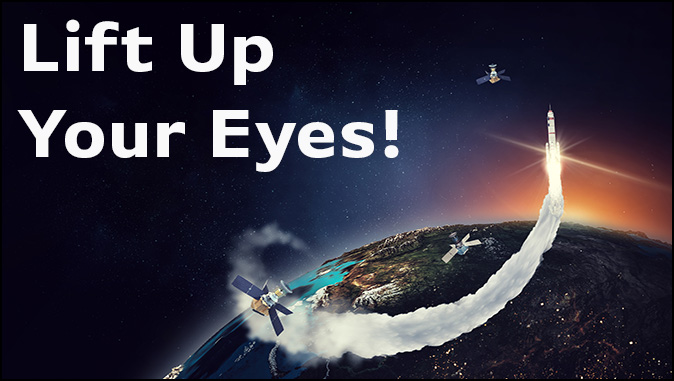 Lift Up Your Eyes
By Tim Moore

Since the late 1950s, mankind has reached for the heavens. Fulfilling an ancient aspiration, we left the ground in lighter-than-air balloons beginning in the 1800s, then achieved manned flight early in the 20th Century. A little over five decades later we were hurling objects — and men — into space itself.

In the 1960s the United States committed itself to achieving President Kennedy’s impossible goal of landing men on the moon and returning them safely to earth. Today, our daily lives are intertwined with satellite technology silently orbiting above our heads. But man’s conquest of space offers a telling warning to those with discernment.

Over the years, 6,110 rockets have launched into space carrying over 12,000 satellites. Collectively they have strewn the heavens with a debris field that is multiplying at an alarming rate. Almost 30,000 pieces of space trash larger than 4 inches are tracked by the American Space Force, but it is estimated that there are 1 million objects larger than .4 inches and over 330 million larger than .04 inches. Traveling at 24,000 mph, even the smallest of those pieces of debris could destroy a satellite or kill a crew if they impacted a spaceship.

How did the space near Earth become so littered? Some objects were intentionally cast off during successful missions. Some were lost by accident — as when one astronaut’s glove drifted away from him during a spacewalk. Many were the result of over 630 known catastrophic breakups, explosions, and collisions (some intentionally caused by hostile government action).

During crisis moments, pilots refer to what they call a “big sky”. The idea is that the odds of hitting something are relatively small given the expanse of the atmosphere around us. But such a cavalier attitude ignores the risk of meeting another aircraft or object — especially in congested areas.

Many people live their lives with such an attitude toward sin. What are the odds, they think, of something catastrophic happening? Like the debris orbiting the earth, many of our sins are out of sight and out of mind. But seen or unseen, recognized or ignored, our sins orbit us unceasingly — until they hit with devastating consequences. Fill a world with sinful men and women and destructive collisions are inevitable.

Mankind’s collective sinfulness has increased so dramatically that it’s hard to imagine how much longer our holy God can tolerate the wickedness on the earth. He has already demonstrated His willingness to deal with sin — and His intention to do so again, and with finality.

What is He waiting for? With sin multiplying around us, why doesn’t He just zap evildoers and impose His perfect will?

Peter recognized that God’s apparent slowness in exerting His judgment is a reflection of His patience, since He does “not [wish] for any to perish but for all to come to repentance” (2 Peter 3:9). But, at the same time God has declared that there will come a time when His patience runs out. When that happens, sinful men and women will cry out for the mountains and the rocks to fall on them and hide them from the wrath of the Lamb (Revelation 6:16).

As God told Habakkuk, “the vision is yet for the appointed time; it hastens toward the goal and it will not fail. Though it tarries, wait for it; for it will certainly come, it will not delay” (Habakkuk 2:3). The destruction that swept over Israel in Habakkuk’s day will pale in comparison to the wrath of God that is poured out in the Tribulation.

Eventually the present heavens and earth itself will be consumed with fire on the day of judgment and destruction of ungodly men (2 Peter 3:7). Unless they are covered by the blood of Christ, our sins — silent and unseen though they might be — guarantee our eventual destruction. Like the millions of bits of debris streaking through space, they will lead to the sudden and catastrophic destruction of all who reject God’s love and forgiveness. Thanks be to God, we have another option as individuals.

Literal rocket scientists recognize the impossibility of sweeping the heavens to remove the space trash that has accumulated over just the past 50 years. Similarly, none of us is capable of eradicating our build-up of sin or mitigating the consequence it merits: death. But there is no condemnation for those who trust in Jesus Christ; all their sins are swept away.

In the final verse of Isaiah 40, the prophet offered encouragement to “those who wait upon the LORD” (v. 31). Even as we wait for His return, we’re promised new strength, to mount up with wings like eagles, to run and not get tired, and to walk and not grow weary. And that’s not just pie in the sky.

Cognitive Dissonance Commentary by Jack Kelley “Son of man, these men have set up idols…

How Big is Enough?

How Big Is Enough? By Hal Lindsey Even Christians fret and worry. Joy can seem…