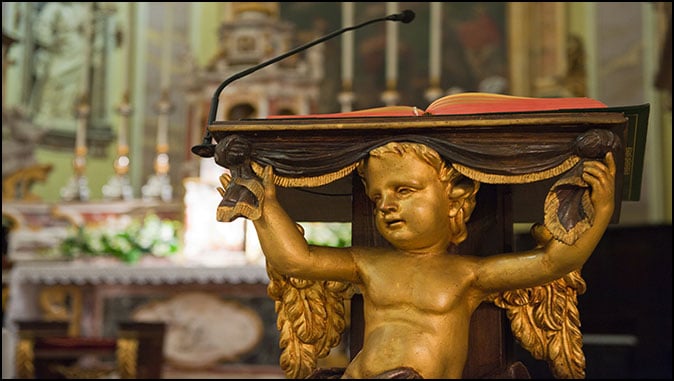 Leaven In the Pulpit
By Grant Phillips

The Levites of Israel were the messengers of God to bring life and peace to God’s people by His Word. They were the ministerial crowd of that day.

As ministers of God, they were to revere and stand in awe of His name. They were to walk with God in daily living and help others do the same.

“The purpose of my covenant with the Levites was to bring life and peace, and that is what I gave them. This required reverence from them, and they greatly revered me and stood in awe of my name.

They passed on to the people the truth of the instructions they received from me. They did not lie or cheat; they walked with me, living good and righteous lives, and they turned many from lives of sin.

“The words of a priest’s lips should preserve knowledge of God, and people should go to him for instruction, for the priest is the messenger of the LORD of Heaven’s Armies.” (Malachi 2:5-7)

However, the priests of Malachi’s day had failed miserably by turning away from God and thereby shortchanging God’s people. This did not set well with God at that time, and it does not set well with Him today any more than it did then. God was very clear about this in the following verses.

“Listen, you priests—this command is for you!

Listen to me and make up your minds to honor my name,” says the LORD of Heaven’s Armies, “or I will bring a terrible curse against you. I will curse even the blessings you receive. Indeed, I have already cursed them, because you have not taken my warning to heart.

I will punish your descendants and splatter your faces with the manure from your festival sacrifices, and I will throw you on the manure pile.

Then at last you will know it was I who sent you this warning so that my covenant with the Levites can continue,” says the LORD of Heaven’s Armies.” (Malachi 2:1-4)

But you priests have left God’s paths. Your instructions have caused many to stumble into sin. You have corrupted the covenant I made with the Levites,” says the LORD of Heaven’s Armies.

“So I have made you despised and humiliated in the eyes of all the people. For you have not obeyed me but have shown favoritism in the way you carry out my instructions.” (Malachi 2:8-9)

Through the apostle Paul the Lord Jesus said these words to the pastoral leaders in the Church age.

“I charge you therefore before God and the Lord Jesus Christ, who will judge the living and the dead at his appearing and His kingdom: Preach the word! Be ready in season and out of season. Convince, rebuke, exhort, with all longsuffering and teaching.

For the time will come when they will not endure sound doctrine, but according to their own desires, because they have itching ears, they will heap up for themselves teachers; And they will turn their ears away from the truth, and be turned aside to fables. But you be watchful in all things, endure afflictions, do the work of an evangelist, fulfill your ministry.” (2 Timothy 4:1-5)

Then again through the apostle Paul Jesus speaks to the Church age leaders and their congregations.

“I marvel that you are turning away so soon from Him who called you in the grace of Christ, to a different gospel, which is not another; but there are some who trouble you and want to pervert the gospel of Christ.

But even if we, or an angel from heaven, preach any other gospel to you than what we have preached to you, let him be accursed.

As we have said before, so now I say again, if anyone preaches any other gospel to you than what you have received, let him be accursed.” (Galatians 1:6-9)

After conveying the Lord’s message in the previous verses, Paul makes a statement that very, very few of our pastors today could truthfully repeat. Many of them may give a resounding “Amen!” to each other, all the while patting themselves on the back, but it would be a total sham. But praise God, even though they are in the minority, there are still God’s faithful few who can rightfully claim the following verse along with Paul.

“Obviously, I’m not trying to win the approval of people, but of God. If pleasing people were my goal, I would not be Christ’s servant.” (Galatians 1:10 NLT)

What is actually being supported from most of the pulpits of America these days? I can’t list everything, but following is a short list in no particular order.

– Attacking God’s Genesis creation account and replacing it with evolution

– Defying the sanctity of marriage

– Homosexuals in the pulpit

– Accusing Jesus of an affair with Mary Magdalene

– Attacking the authenticity of the Bible

– Attacking the prophecies in the Bible

– Pastors and other leaders involved in immoral affairs

– Pastors and other leaders living like kings and queens

– No condemnation of sin within the church

Instead of the Church taking the Gospel out into the world, the world is moving in and corrupting the church.

Have you ever shoveled manure before? Well, this is what many so-called pastors support and are feeding their congregations today. How can any man call himself a pastor and support this sort of drivel? Do they even know Jesus Christ, the Head of the Church, as their Savior? I seriously doubt it.

Again, we who are followers of Christ should thank Him daily for the few pastors who are His true servants, and follow Him as Savior and LORD. Let us not forget to pray for them. They are few in number, and need our prayers.

No true servant of the Lord Jesus Christ would support any of this false gospel from hell. This is why we also need to pray for the souls of the violators, that they awake and see their need to be saved before it is too late.

The really sad part about this is that these charlatans are leading millions to hell right along with them. Is it any wonder the “average” Christian is so confused today? They have been led by wolves in sheep’s clothing, thinking Jesus approves of this nonsense.

Listen, there is only one source that can be completely trusted, and that source is God’s Word. It is called the Bible. Read your Bible. In it you will find the Truth, but you have to read it. Any true pastor of our Lord would wholeheartedly agree.

Don’t allow others to do your thinking. Check whatever you read and/or hear by the Bible. Be like the Bereans.

“And the people of Berea were more open-minded than those in Thessalonica, and they listened eagerly to Paul’s message. They searched the Scriptures day after day to see if Paul and Silas were teaching the truth. As a result, many Jews believed, as did many of the prominent Greek women and men.” (Acts 17:11-12 NLT)

This morning my wife and I just finished our reading of Matthew 23. As we were thoughtfully reading these words of Jesus to the Pharisees, Sadducees and scribes of that time, I kept thinking how appropriate His words are for many church leaders today. Even though Jesus’ condemnation was to the leaders of Israel at that time, don’t think for a minute that we can ignore them.

The Jesus the liberals are pushing off on their congregations today cannot be found anywhere in the Scriptures. The harshest words ever spoken in the entire Bible are spoken by the Son of God (Jesus) in this 23rd chapter of Matthew, and they are just as applicable to us today.

Please read this chapter prayerfully, and realize we are not exempt. At the same time, notice the next verse as Jesus closes His message to them.

“O Jerusalem, Jerusalem, the one who kills the prophets and stones those who are sent to her! How often I wanted to gather your children together, as a hen gathers her chicks under her wings, but you were not willing!” (Matthew 23:37)

This is one of the saddest verses in the Bible, especially noting, “but you were not willing.” The Jewish leaders of that day were unwilling to recognize and accept Jesus as the Son of God. It appears the same can be said of many of our leaders today.

Much of this 23rd chapter of Matthew is prevalent among most church leaders today, but how many are listening? Jesus said, “I wanted to gather your children together, as a hen gathers her chicks under her wings.” Many of today’s church leaders need to come to Jesus and be saved. Will there be any who are willing to do so before He comes for His Church? All who come to Him, He will accept.

“All that the Father gives Me will come to Me, and the one who comes to Me I will by no means cast out. And this is the will of Him who sent Me, that everyone who sees the Son and believes in Him may have everlasting life; and I will raise him up at the last day.” (John 6:37, 40)

Being a Real Man