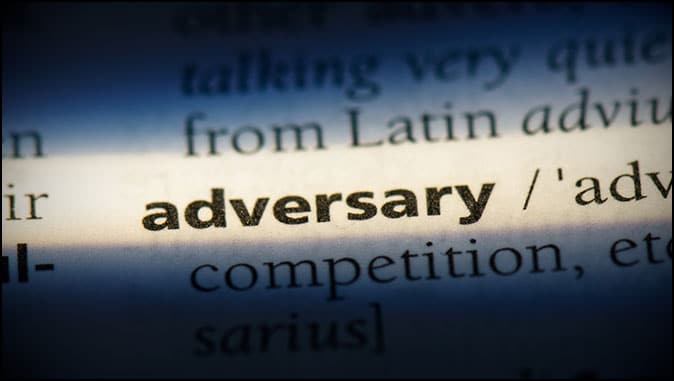 Got Any Adversaries?
By Steve Schmutzer

Tell me about the adversaries in your life. No, not the taxman or the bill collectors. Everyone deals with them. And I don’t mean pain and distress, health issues, family problems, or financial uncertainty. Most folks I know can relate to all those things. This is not about your job either. A lot of us get up every morning wondering if we have the strength to put our nose to the grindstone again.

I’m talking about THOSE kinds of adversaries. What!?! You don’t have any? What’s wrong with you? In conversations I’ve had with several people lately, we’ve talked about the issue of adversaries. I didn’t bring the subject up. They did. Those chats went something like this. General discussions about national affairs gradually got more personal. Somewhere along the line, they told me they aren’t at odds with anyone – and as far as they see it, nobody’s got any issues with them. What bothers me is they seem proud of that. They feel it’s some sort of badge of honor, a sign they’re getting along and doing something right. Excuse me while I barf! Our world today doesn’t need any more dead fish who float downstream. It needs live, vigorous, determined fish who swim upstream. The world needs more fish who will battle the currents, bounce off the rocks, and assume the risks and challenges of standing apart.

I am not a fish, and nor are you. But the analogy applies. Our times urgently need people who will stand for virtue, speak the truth, and not endorse politically correct opinions. Said another way, the world needs people who are willing to earn adversaries. Even fierce ones!I chanced upon an excerpt by 19th-century Scottish poet, Charles Mackay. He puts this issue much better than I. Here is what he wrote:

“You have no enemies, you say? Alas! my friend, the boast is poor; He who has mingled in the fray duty, that the brave endure, Must have made foes! If you have none, Small is the work that you have done. You’ve hit no traitor on the hip, You’ve dashed no cup from perjured lip, You’ve never turned the wrong to right, You’ve been a coward in the fight.”

I’m not clear if that’s the whole poem or part of it, but it’s enough to make the essential point. If one has no adversaries, then one has not stood for anything – or anyone. They are a coward. That’s nothing to be proud of.

Look around you. Our world today is being ripped apart by unprincipled people. They are not concerned with law and order, and for them “the end justifies the means.” Their corruption is marked by an activism fueled by ignorance and confidence. They are determined to speak their mind.

What about the rest of us? Speaking as a believer in Jesus Christ, I am mostly concerned with those who claim to be of the Christian faith. Many of those gather each Sunday preoccupied with being ‘seeker-friendly.’ They’ve mostly dismissed the fact that people who have chosen darkness rather than light (John 3:19) are often at odds with – and even hostile to – the truth. Why? Jesus Himself said we should expect the world to hate us and to hate the things we stand for and support because it first hated Him (John 15:18-20). Several conclusions can be made here.

First, if the lawless groups of the world have no bone to pick with you, if they feel you’ve got a lot in common with them – then you’re not standing for the truth.

Second, it’s not possible to do what’s right and avoid earning adversaries. You cannot have it both ways. In the same way, you cannot run around with skunks without smelling like one, you cannot be a pioneer for truth without receiving arrows.

And third – that whole badge of honor thing? It’s really about earning adversaries the right way. While we are instructed to be at peace with everyone if it’s within our means to be so (Romans 12:18), this is no instruction to sidestep our responsibility to stand up for the truth. It’s to our own gain when we do the right thing the right way for the right reason (Luke 6:22).

The basic point is this: to be right with God has often meant to be wrong with man. When we demonstrate a right relationship with God, when we properly say the things that need to be said, when we stand up for law and order, when we expose the deeds of darkness, and when we demand justice, we will become a target. That’s just the way it is. There is no way around it. If you don’t have any adversaries, you’ve got a problem.

Take Up Thy Sword

Take Up Thy Sword By Grant Phillips “And take the helmet of salvation, and the…

Are We Hedging Our Bets?

Are We Hedging Our Bets? By Jack Kelley It was the clearest message the Lord…

Facing the Future By Hal Lindsey 2021 is not a year for wringing hands. It…

Trying to Beat the Curse

Trying to Beat the Curse By Bud Hancock “Let him that stole steal no more:…