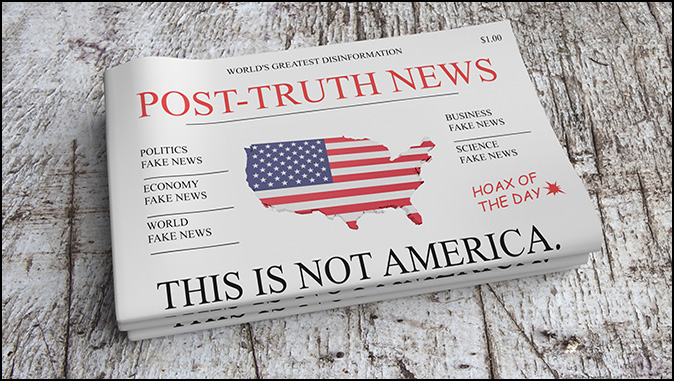 In man’s continuous effort to try to supplant God’s purposes and instructions and replace them with his own, we’ve witnessed incessant attempts to erect ideological and philosophical towers of Babel. Through Modernism, generally speaking, or Enlightenment Humanism, man asserted that reason and science provided the accurate, objective, and reliable foundation for knowledge, truth, and life’s meaning. Then, once the glaring deficiencies of Modernism were exposed, many who ascribed to it were left with their lives in utter ruin. Instead of returning to the God of the Bible, man then moved on to Postmodernism. Through Postmodernism man asserted there is no objective, universal truth. Morality is relative. Truth is relative. Now, we’ve entered the Post-truth era. Man is now asserting that there is no such thing as universal, objective truth.

To give you an idea of what I mean when I say we’ve entered the Post-truth era consider the following statements:

All of these statements are objectively true. Nevertheless, all of these statements are considered controversial today. We just had a nominee confirmed to a lifetime appointment to the highest court in our country, the one that reviews the actions of our Congress and the U.S. President. Her nomination was regarded as “historic” solely because she was a woman (with more melanin in her skin than others) but she was either incapable or unwilling to define what exactly a woman was… at least not in the context of a U.S. Supreme Court confirmation hearing. I’m not a biologist either, but I’ll define “woman” for you. A woman is an adult human female.

Italian Marxist Antonio Gramsci, were he alive today, would marvel at just how far modern society has unraveled. Gramsci is widely known to be the “Godfather of Cultural Marxism.” He posited that the means to establish Marxism globally was a “long march through the institutions.” He favored a Marxist revolution via evolution as opposed to its imposition by violence. One of the tools cultural Marxist strategies Gramsci sought to impose was the usage of language as a weapon of war. He argued that linguistic fluidity is a weapon that must be wielded to dislodge mankind from truth. Language should be manipulated, perverted, and utilized by ever-changing definitions and establishing what is and what isn’t popularly acceptable, i.e., what is “politically correct.” Failure to employ the proper or politically correct verbiage must be met with societal consequences. If you ever wondered how and why words like “gay” have been redefined in society, you have Mr. Gramsci to thank.

(Side note: former Mayor of South Bend, IN, and presidential candidate Pete Buttigieg’s father was one of Antonio Gramsci’s biggest fans before the elder Buttigieg passed away. Joseph Buttigieg (Pete’s dad) lauded the Communist Manifesto and was a founding member of the International Gramsci Society. The Marxist apple (Pete Buttigieg) didn’t fall very far from the Marxist tree (Joseph Buttigieg). But I digress.)

A phenomenon that may be new to you or me doesn’t necessarily make it “new.” Ecclesiastes 1:9 has something to say about that. When considering this Post-truth culture, the Bible gives us keen insight to enable us to understand where we are now and how best to engage to be effective ambassadors of the Messiah’s eternal kingdom. John 8:31-38 is particularly helpful here.

John records Jesus encouraging His Jewish audience to abide in His Word (v. 31). In fact, abiding in His Word is one of the ways the authenticity of discipleship would be confirmed (v.31). Then Jesus goes on to say abiding in His Word is how His disciples would know truth intimately and this intimate knowledge of truth would “make you free” (v. 32). Jesus went on to say, “So if the Son makes you free, you will be free indeed” (v. 36). The entire thrust of Jesus’ words pointed to faith in Him as the way to enjoy eternal life. But, Jesus’ three words in v. 32, “make you free” sent His audience into tortured frenzy complete with an obtuse display of cognitive dissonance.

Willfully missing his point, they responded, “We are Abraham’s descendants and have NEVER been enslaved to anyone; how is that you say, ‘You will become free’?” I did say this was a Jewish audience, right? Hebrew people, right? One of the defining historical moments of the Hebrew people is “the Exodus.” There’s a book in the Hebrew Bible titled “Exodus,” which means exit…right? Exit from what? Egyptian (say it with me now) SLAVERY! Here, ladies and gentlemen, we have a biblical example of a post-truth people. Jesus’ audience was so committed to the ethnic narrative they’d created for themselves that they were willing to deny entirely a significant portion of their very own history in order to protect the fabricated narrative. There was a huge chasm between their fabricated narrative and truth. But in the face of truth, they clung to non-reality.

How then are believers to execute our LORD’s Commission to make disciples in a post-truth culture? We must lovingly, consistently, and relentlessly push truth into the chasm between narrative and reality. We must never forget that full-on love for God is accompanied by loving our neighbors as ourselves (Matthew 22:34-40). True love requires grace and truth (John 1:14). You cannot, in the name of love, skirt, obscure, or side-step truth. Ideas have consequences and bad ideas create casualties. When people have been ensnared in the death grip of stinking thinking and anti-Christ ideologies and philosophies, many will look for a way out. Isaiah 60:1-3 is very helpful on this point.

Pushing truth into the chasm between narrative and reality has already born fruit in several recent occurrences. The case of University of Pennsylvania swimmer, Will Thomas, is a good example of this point. Will Thomas swam for the University of Pennsylvania for three years. His performance was unremarkable. Then, he decided to identify as a woman (though not actually a woman — see my definition above), and voila. He has dominated women’s swimming. This has caused an outcry among many. Title IX of the 1972 Education Amendments to the 1964 federal Civil Rights law exists solely to create sports exclusively for women. Even those who aren’t Bible-believing Christians are objecting to the post-truth absurdity that men can be women.

We journey next to the municipal hub of all things regressive, San Francisco, CA. There, several city school board members became vocal advocates for the cultural Marxist narrative of the moment all while keeping schools closed to children as faithful Branch Covidian members. Well, even the citizens of deep-blue San Francisco said enough! They held a special recall election and gave those now former board members the boot.

Lastly, we’ll go now to the state of Florida. In spite of the intentional mischaracterization of Florida’s “Parental Rights in Education” law which simply prohibits teachers from discussing sexuality in the classrooms of kindergartners through third graders. We’re talking 4 and 5-year-olds through 8-year-olds. Though a vocal minority of Disney employees and a sycophantic media opposed the legislation, the majority of Floridians support it. A majority of Democrats in Florida even support the bill.

As Christ-followers, our assignment is to be salt and light and to execute the Great Commission to make fellow disciples of Christ. The examples I noted above identify occurrences on the socio-political front. I used them, however, because they are all scenarios where God’s design in creation, identity, and sexuality are at issue. I’ve said numerous times that these are gospel issues because the authority, historicity, and applicability of Scripture is the true ground of the contention. If the culture can nullify Genesis 1 and Genesis 2, then it has effectively compromised the effectuality of Genesis 3. The third chapter of Genesis details the origin of sin’s entrance into the world and introduces us to the only cure for mankind’s sin sickness and the eternal consequence that flows from it, “the seed of the woman” (3:15). To state it simply, politics is merely the externalization of one’s theology. The examples above hopefully show that we shouldn’t assume people are “too far gone” for God to break through to them. What begins with a socio-political realization could grow into a regenerative realization. My dear sister in Christ Laura Perry explains how Jesus saved her from trans-insanity in American Family Studios’ film “In His Image.”

In sum, I propose three recommendations to aid believers as we seek to contend for the faith in a Post-truth culture.

The first is actually Jesus’ instructions in John 8:31. Abide in the Christ’s Word. We must not allow the Word of God to become to us a place of infrequent visitation. It must be our habitation, our dwelling place. As we commit to abide in God’s Word, we’ll move from merely reading his Word to His Word reading us. It will confront us and aid us as we seek to do the next two things.

Secondly, we must press truth consistently and relentlessly into our hearts, especially when no one else is around. We cannot be those who lie on our taxes, lie to our spouses, or secretly nurse pornography addictions yet wax apoplectic publicly because someone votes a certain way or advocates for a political policy we disagree with. The seminal apologetic Scripture in 1 Peter 3 requires believers to sanctify Christ in our own hearts before we even begin to “give a reason for the hope we have.” Holy living and loving Christ personally must always come, in terms of primacy, before we seek to offer Him to others.

Thirdly, we must refuse to live a lie. We must cling to truth in our own lives. Be honest with ourselves and about ourselves. Refuse to allow your minnow fishing story to become a whale of a tale. We must love truth privately before contending for truth publicly. Christ followers must love truth because ultimately truth is a person.

Will Heaven Be Boring?

Will Heaven Be Boring? By Grant Phillips Just to ask the question, “Will Heaven be…