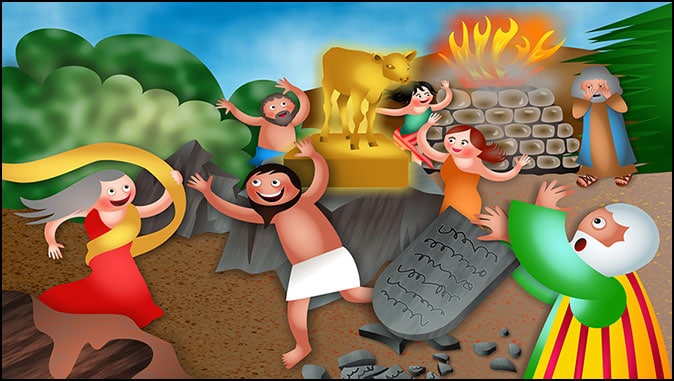 Come, Make Us a God
By Anne Reed

Since the fall of man, human beings have been looking for someone to fill the gap between God and themselves. And there is reason for that.

God is too holy to meet with you and me. Who will get on our level and take up our case? Who understands our temptations? Who will make allowance for our failures and accept us unreservedly?

Is it possible that believers look to “Christian celebrities” to meet some of these deep needs? Many look for answers in conference speakers, bloggers, authors, pastors, and musicians.

Human beings are notorious idol makers. It’s who we are. It’s what we do – but why?

Inclination toward idolatry is about us, not the idols. We can make an idol of anything or anyone, but the effort is always an attempt to satisfy self.

A young mother by the name of Erica feels grossly inadequate in her role as wife, mother, homemaker…woman. She sees herself as frumpy compared to the other women in her life. She’s tired; her house and kids are unkempt. To put it in her own words, she feels “less than.”

She’s introduced to a “Christian blogger” who humorously and unashamedly writes about shortcomings that are nearly identical to her own. The blogger has hundreds of thousands of social media followers. She’s fashionable, funny, and likable. Before long, Erica finds herself opening her laptop early each morning to find the treasures in her new “friend’s” daily blog. Finally, someone understands. Her inadequacies are melting away.

Scripture reading and prayer aren’t given much thought, not with her daily dose of feel-good, laugh-out-loud comfort food for the flesh. Soon, she is connected with a network of like-minded bloggers and followers. That plaguing “less than” feeling is fading into the distance. And the annoying challenges found in Scripture are a thing of the past. The Holy Spirit promptings and convictions are gone. Now, her answers come from her sisterhood. What they say goes. Compromise in biblical truth is masked in words like love, acceptance, and tolerance. Idolatry is now in full force.

Idolatry, however, looked altogether different in Old Testament accounts. Or did it?

When Moses lingered with God on Mt. Sinai longer than expected, the Israelites panicked. They called his right-hand man Aaron: “Come, make us a god who will go before us; as for this Moses, the man who brought us up from the land of Egypt, we do not know what has become of him” (Exodus 32:1).

Who knew if Moses would ever return? Who would communicate the words of God to them? Who would lead them? Who would show them the way out of the wilderness and into the Promised Land? Who would ensure they would be kept alive for that matter? They demanded an answer.

Persuaded, Aaron collected their gold rings and reshaped them into the form of a calf. In today’s culture, we scoff at the idea of replacing Almighty God with a statue.

Not likely on the top-ten list for American believers is the temptation to bow down to a hunk of gold formed into the shape of a baby cow. But the Israelites did. And they proclaimed to one another that the golden calf was the god who had brought them out of the land of Egypt (Exodus 32:8).

How could an inanimate structure formed by the hands of man possibly replace God and now provide the guidance they needed?

This rebellion came after God had revealed His extraordinary kindness and fatherly love toward them in countless ways, from parting the Red Sea to providing manna and water for their sustenance as they journeyed through the wilderness.

Still, direct connection and face-to-face accountability with their Heavenly Father was a terrifying thought. “Speak to us yourself, and we will listen,” they had pleaded with Moses before he ascended the mountain. “Let not God speak to us, or we will die.” His presence was too overwhelming – His power and their inferiority too great, the chasm far too wide.

In the imagination of their minds through a new self-crafted god, they would hold Almighty God at an even greater distance. Without a messenger such as Moses to speak unmitigated truth, accountability was gone, and they could live according to their desires.

Some two thousand years later, the Apostle Paul’s first letter to the Corinthian church revealed a new issue. Their behavior bore evidence of immaturity in the faith and dependence on flesh rather than the Spirit of the living God. Already, in the early formation of the Christian church, believers were beginning to look to men rather than God Himself. Paul’s correction was clear:

For when one says, “I am of Paul,” and another, “I am of Apollos,” are you not mere men? What then is Apollos? And what is Paul? Servants through whom you believed, even as the Lord gave opportunity to each one. I planted, Apollos watered, but God was causing the growth. So then neither the one who plants nor the one who waters is anything, but God who causes the growth (1 Corinthians 3:4-6).

Through the testimony of these men, they knew about Jesus – about His life, the miracles He performed, His sacrificial love, crucifixion, and resurrection. The whole world had groaned in expectation for thousands of years for the One who would restore relationship between God and man.

“For there is one God and one mediator,” explained Paul, “also between God and men, the man Christ Jesus, who gave Himself as a ransom for all, the testimony given at the proper time.”

They could now enjoy God in a more intimate way than Moses. They were not limited to sporadic visits but could live in communion with the indwelling Holy Spirit. Still they gloried in men – God honoring men, but fallen men. The tendency has continued for centuries, and the prince of this world has taken advantage of it.

It is an easily accomplished ploy for two reasons:

▶ We are made to worship God. When this desire is not controlled by the Spirit of God, our worship is misdirected, and idolatry is set in motion.

▶ We are made to be loved by God. When an ungodly hunger for adoration is met with opportunity, we gladly become the object of idolatry.

We have the written Word of God and His indwelling presence, yet, without realizing it, we seek an empty replacement. Our idols are not always made of gold or lifeless objects. Sometimes they have beautiful smiles, talent, warm and witty personalities, articulate speech, and cool clothes. They help us feel good about being in the “Christian crowd” that is still accepted by the world.

In recent months and years, the Christian celebrity culture has produced an array of startling disappointments. One after another has fallen into an abyss of anti-biblical claims and behaviors with followers in tow.

Popular Christian bloggers, authors, singers, evangelists, and pastors are compromising on biblical truth with grave regularity – especially on the issue of homosexuality. It is becoming increasingly difficult, perhaps impossible, for celebrities to maintain a position of popularity in the world without caving on biblical values.