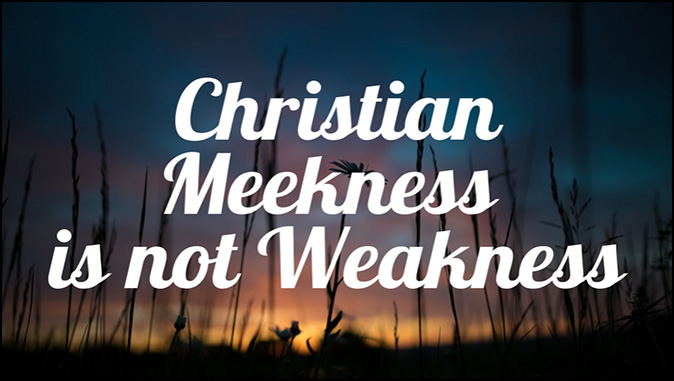 Christian Meekness is Not Weakness
By David L. Goetsch

There was a popular seminar making the rounds recently: “Self-Promotion 101 — Blowing Your Own Horn for Success.” The gist of the seminar was meekness is weakness and humility is for losers. You have to blow your own horn. If you don’t promote yourself, who will? The seminar went beyond just encouraging self-promotion to celebrating it. It claimed participants should think of self-promotion not as “boasting” but as “boosting”; a strategy for giving themselves a boost up the career ladder.

We have become a society in which in-your-face boasting and blatant self-promotion are not just accepted but encouraged. You see it in sports, the entertainment industry, and society in general. This is why social media and the Internet are littered with videos of people doing outlandish things in pursuit of their few minutes of fame. They are trying to win the self-promotion lottery by calling attention to themselves. Today’s mark of success is the number of “likes” or “views” generated by what you post about yourself on the Internet.

Many people now view humility as a liability rather than an asset. This is because the world has adopted a misguided view of what humility means. Few Biblical concepts are more misunderstood than humility and meekness. In a world where blowing one’s own horn and blatant self-promotion are common, humility and meekness are often viewed as weakness. We have become a society in which people think they should tell the world everything about themselves over and over, minute by minute, and day after day. The most common messages on social media can be summarized in these words: “Look-at-me.”

In the Bible, meekness and humility are viewed as putting others ahead of yourself and treating them with respect, even when you do not respect their actions or words. The Biblical view of meekness and humility manifests itself in modesty, courtesy, empathy, self-effacement, and unobtrusiveness. It does not mean — as the world believes — being an obsequious weakling or a sheepish doormat for others.

When it comes to humility, our example is Jesus Christ. No person who ever walked the earth was more humble or meek than Jesus Christ, yet who would call him a weakling? Certainly not the moneychangers he drove out of the Temple (John 2:13-16) or those who watched him willingly endure the agony of the cross and the torture that preceded it (John 19). Though meek and humble, Jesus walked the earth as the personification of moral strength.

Boasting and self-promotion are products of weakness not strength. They are driven by insecurity. Ironically, it’s often the case that the louder the boasting the more insecure the boaster. Humility and meekness on the other hand are products of strength. To be humble and meek in an era that encourages the opposite requires a reservoir of inner strength that can come only from Jesus Christ. It takes strength and moral courage to let your actions, performance, and example speak for you; something people who blow their own horns lack the confidence to do.

A football coach from years past used to tell his teams, “If you’re good, you don’t need to brag and if you aren’t, you have nothing to brag about.” This was good advice back then and it still is today. The reason boastful self-promoters lack confidence is they want to be self-reliant rather than Christ-reliant. As human beings we are flawed and, therefore, unable to rely on ourselves to be strong. However, as Christians we have the strength to be humble and meek because our strength comes from Christ.

Joan was determined to climb the corporate ladder in record time. As a single woman with no family obligations, she could devote days, nights, and weekends to her career; something she had been doing for two years now. She even worked on Sundays. Right after church each week, Joan picked up a takeout meal and ate it in her office while working on client files. But, in spite of the long hours and unflagging commitment, Joan was still stuck at the bottom of the corporate ladder.

Frustrated, she approached a colleague for advice. He suggested perhaps management wasn’t aware of how hard she was working. According to this colleague, Joan needed to take the initiative and start blowing her own horn. He told her, “A little self-promotion might help.” Joan decided her colleague was right. She knew several other coworkers who made a point of maintaining a high profile with the company’s executives. She decided right then and there to emulate their examples.

The next day, she started her self-promotion campaign. She looked for ways to let the company’s executives know when she worked late and on weekends. If a customer gave her a compliment in an email or text Joan forwarded the message to every member of the company’s management team. In meetings, she interlaced her comments with such phrases as “When I was working Sunday afternoon or when I was working late last Friday night…” As time went by, her boasting and self-promotion became more pronounced and more blatant.

Finally, one day she was called to the CEO’s office. Joan was certain she was finally going to receive the well-deserved promotion she sought. Consequently, she was shocked by what the CEO had to say. “Joan the management team would like to know what has come over you lately. For more than a year we have had our eyes on you as a rising star with enormous potential. We have watched as you quietly came in early, worked late, never hesitated to take on difficult challenges, and even worked on weekends.

The entire management team was impressed by your dedication and determination, but we were even more impressed by your humility. You seemed to be precisely the kind of person we wanted to be part of our management team. We don’t need self-promoting braggarts on the team. We have already had a bad experience with such a person who, thankfully, is no longer with us. The kind of person we want let’s her example of diligence and excellence do the talking for her.”

Joan was shocked. She had no idea the company’s executives knew about her late nights and weekends. Joan told the CEO she was convinced her dedication and hard work were going unnoticed, so she took someone’s advice and started blowing her own horn. The CEO told her, “Joan, we have found that self-promoters breed resentment among their coworkers which, in turn, undermines morale and productivity. In our business, misguided ego is a killer. If you want to move up in this company, go back to being the humble but dedicated Joan of old. We’ll be watching.”

In the aftermath of that meeting, Joan felt foolish. She knew God expected her to be meek and humble. In fact, she had recently participated in a Bible study this subject. In any case, she took the CEO’s advice and after an interlude during which the management team observed her closely, Joan was finally promoted to a supervisory position. Joan learned an invaluable lesson from a CEO who was patient and forgiving.

She never again indulged in self-promotion; nor did she accept it from those she supervised. Like the CEO who gave her a second chance, Joan gave boasting subordinates a second chance, but only after delivering a stern lecture on the subject. Her message to all the employees she supervised was, “Be humble, and let your example speak for you.”

There are important lessons in Joan’s story. The first is humility and meekness are more than just good human-relations tactics, they are Scriptural mandates. 2 Chronicles 7:14 makes clear God expects his children to be humble. Humility manifests itself in meekness, courtesy, modesty, and respect. In spite of what the world believes, these practices grow out of strength not weakness.

There is nothing weak or obsequious about being courteous, modest, or respectful. On the contrary, there is strength in these things, the strength of Christ. When you are humble and meek rather than boastful and aggressive, you reflect the strength of Christ for others. Remember what the football coach used to tell his team: “If you’re good you don’t need to brag, and if you aren’t you have nothing to brag about.”

The essence of humility and meekness is thinking more of others and less of self. These Scriptural characteristics are the antithesis of that ubiquitous philosophy: taking-care-of-number-one. Thinking more of others is the message in Philippians 2:3: “…count others more significant than yourselves.” You cannot love your neighbors as yourself when focused solely on taking care of number one. Humility is the foundation of selflessness. Boasting and self-promotion, on the other hand, are products of selfishness.

Misguided pride can ruin your life. This is the message in Proverbs 11:2. Fortunately for her, Joan learned this lesson before it was too late to alter course. The desire to climb the corporate ladder in record time — a desire driven by misguided pride — lured Joan down a path she knew was wrong. Fortunately, her company’s CEO intervened before she had to suffer the “disgrace” mentioned in Proverbs 11:2. Joan was given a second chance and, as a result, developed the wisdom that comes with meekness and humility.

Joan also had to learn the lesson taught in James 3:13: to humbly show others a good example and then let your example speak for you. Joan not only learned this lesson, but taught it to those she supervised. It takes confidence to be meek and humble, but not self-confidence. Self-confidence is a tenuous concept at best. The confidence that allows you to be meek and humble comes from knowing you are a child of God. As a child of God, you endeavor to do your best and leave the outcome to him.

Will Heaven Be Boring?

Will Heaven Be Boring? By Grant Phillips Just to ask the question, “Will Heaven be…