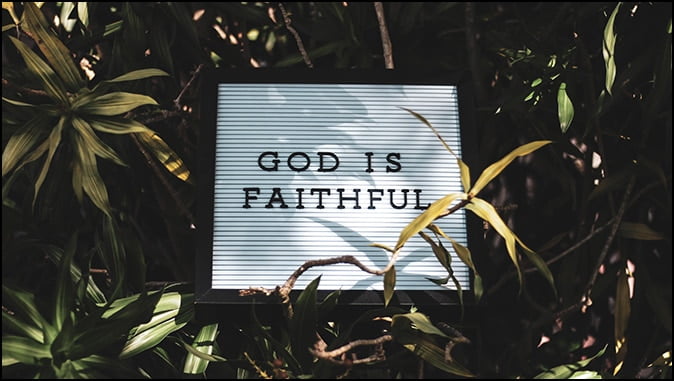 My heart ached this past Monday morning as I read about the chaos and lawlessness near the White House. I felt both anger and fear as I saw pictures of violence and deadly attacks on law enforcement in cities throughout the United States.

It was not until I read several Psalms (especially Psalm 27) and about Jesus’ promises return that my heart began to settle down and my focus changed from the rioters to my hope in Jesus and His coming reign in this world.

During the past week the Lord has reassured me through a variety of passages from Scripture and I needed all of them this week. Besides Psalm 46:10, I found encouragement in these verses.

You might think this is rather obvious, but many pastors and teachers today tell us that the Lord has fulfilled almost all of future prophecy. They falsely limit unfulfilled prophecy to the Second Coming and eternal state and in doing so blind people to the hope contained in the pages of Scripture.

This not only contradicts Scripture, but defies the character of God as One who loves to reveal the future. The Lord brought this home again to me with the words of Amos 3:7, “For the Lord God does nothing / without revealing his secret / to his servants the prophets.” See also Isaiah 46:8-13.

We have the prophetic words of the ancient prophets, of Jesus, and of the apostles that speak to the time in which we live. The anarchy in the United States, wars in the Middle East, and famines that rage across Africa represent a mere prelude to the coming tribulation when things will be exponentially worse. Jesus said this in Luke 21:28, “Now when these things begin to take place, straighten up and raise your heads, because your redemption is drawing near.”

If there ever was a time to look up, it is now!!

“Exactly as I Have Been Told”

One would not think that Acts 27:25 has anything to do with prophecy, but I would beg to differ.

The setting of this verse is the shipwreck the Apostle Paul endured on his way to Rome. The storm the ship encountered was so fierce that Acts 27:20 says that “all hope of our being saved was at last lost.” However, in answer to the pleas of Paul, the Lord assured him that no one on the ship would lose their life.

As the apostle relayed this message of hope to those on board the doomed ship, he ended with these words, “So take heart, men, for I have faith in God that it will be exactly as I have been told.”

As we look at the world today, we see no visible evidence that the Lord is about take His church home, judge the entire world, and bring Israel to faith in her true Messiah. Yes, we see conditions exactly as Scripture predicts for the last days, but we do not yet see His direct intervention.

This is where the words of Acts 27:25 spoke to me. I know rapture, tribulation, and Second Coming will happen “exactly as I have been told” in the words of Scripture. We hope for things we do not see, but because of our confidence in God’s Word, we wait “with patience” (Rom. 8:23-25).

Jesus is coming to take us home before the tribulation. He will judge the world for its wickedness, and He will return to earth someday to setup His kingdom in which we will reign with Him. It will happen exactly as the New Testament says it will happen.

In the meantime we wait in full confidence Jesus will keep His promises to us.

The Sure Word of Prophecy

I have read and heard a lot of false teaching regarding biblical prophecy. I am writing a series on several of them on my blog. These various teachings have one key element in common; they place little value on the words of Scripture.

Our hope in Jesus’ soon appearing to take us home to heaven is based on a careful examination of the words of Scripture. I love the words of 2 Peter 1:19-21. “And we have the prophetic word more fully confirmed, to which you will do well to pay attention as to a lamp shining in a dark place…knowing this first of all, that no prophecy of Scripture comes from someone’s own interpretation. For no prophecy was ever produced by the will of man, but men spoke from God as they were carried along by the Holy Spirit.”

We have the “prophetic word” that “God breathed out” for us (2 Tim. 3:16). The Lord did not give us allegories when He spoke of the future; He did not speak in symbolical symbols that only the educated in our midst can understand. No, He communicated our hope in words that we can understand and upon which we can base our hope.

We live in troubled times in which it’s easy to fret or become anxious. As believers, we have the sure words of biblical prophecy telling us what lies ahead. We know things will happen exactly as the Bible tells us. Read 1 Thessalonians 4:13-18, 1 Corinthians 15:50-57, and Philippians 3:20-21. Jesus’ return to take us to His Father’s house in heaven is our imminent hope (John 14:2-3).

Do not let others deceive you with fancy but false interpretations of Scripture based on allegory.

You can trust the words of Scripture. You can stand firm upon them. Jesus is coming for us soon!

Forever Young, Forever Whole By Jonathan C. Brentner “Who is this guy with the wrinkles…

The Astounding Partnership By Hal Lindsey In 1995, Timothy McVeigh put together a large mix…

Why Serve God? Dr. John Oswalt "I have always loved you,” says the LORD. But…

Choose Wisely By Mason Beasler 35,000. That’s how many decisions the average adult makes in…

Listen to One Another

Listen to One Another By Maddie King Once people reach a certain age, usually in…

Praying Psalm 91: Strong Protection By Joseph Parker “He who dwells in the secret place…