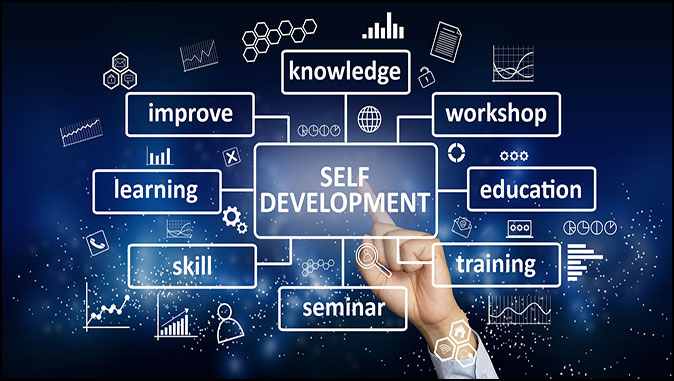 The Bible and Self Development
A Bible Study by Jack Kelley

No one looks at a tree growing out of a crack in the rock high above the desert and calls it the devil’s work, but many extol it as a miracle of God’s creation.

I grew up in a secular environment. By that I mean that while we attended a denominational church every week, the notion of a born again spirit filled believer was as foreign to me as a person from another planet would have been in our little upstate New York town. After school and a stint in the Navy, I wound up in the family business, where I found myself trying to motivate our sales force to higher levels of production. A friend sold me a self-development program and soon I was buying more for our sales staff. Sales performance soared as our sales people began to realize that they could do much better, for us and themselves, by activating more of their untapped potential for success. Later I joined my friend’s firm and eventually became a partner in one of the nation’s most successful organizations in the emerging human resource development industry before founding my own training and consulting firm. During this time I saw thousands of lives changed for the better.

Real Christians Don’t Do That

When I became a “real” Christian many of my more experienced, and I assumed more learned, Christian friends looked askance at my involvement in self development, labeling these things as New Age and Pagan influences. And indeed much of what passes for self development these days is dangerously close to being just that. As a result I abandoned the most lucrative product my firm offered, a self development process I had authored called “The High Achiever.” In it I wrote that our Creator had given each of us potential for success beyond our wildest imagination, and it’s our responsibility to use as much of it as possible as an expression of gratitude.

Yet in my studies I kept finding Biblical passages that seemed to be encouraging us to achieve more of our potential for the purpose of glorifying God. It looked to me as if in their approaches to self-development the secular humanists had hijacked Biblical principles and then edited God out of them to make them palatable to non-believers. This approach works because the Biblical principles are sound. Like gravity, they work even if you don’t believe in the One Who ordained them. The dangerous result is that these principles, given by God and contained in His Word, are now used primarily by non-believers to glorify man, and in some cases even other gods.

We’ve Thrown Out The Baby With The Bath Water

The reaction of a broad spectrum of the Christian community has been to condemn these principles as tools of the devil, and because of this many believers today live pathetic defeated lives that not only don’t glorify God, but actually serve by example to turn seekers away from Him. The rejection of this portion of God’s word arises largely out of the average believer’s ignorance of the Bible due in part to the poor (in both quality and quantity) teaching many receive. Not familiar with the whole counsel of God, they assume that His principles for abundant living were actually developed by humanists or even pagans to lure them away from Him. They wrongly conclude that His promise that “I have come so that they may have life and have it abundantly” (John 10:10) refers only to the Millennium.

A Lesson From Creation

But let’s take a look at God’s creation for the lesson it teaches. In all of creation every living thing whether plant or animal naturally strives to achieve its maximum potential. You can’t find a tree that only grows to half its normal height and then quits, or a cow that only gives a portion of the milk that it could produce. There are no lazy lions or salmon or even petunias. Every creature that God has created is predisposed to achieve its destiny and to fight with every ounce of its strength to do so. No one looks at a tree growing out of a crack in the rock high above the desert and calls it the devil’s work, but many extol it as a miracle of God’s creation.

Only mankind has been given the choice to settle for less than our Creator intended for us to be, and only man is taught to do this to avoid offending God. But what has God shown us? Abraham, the father of the Jewish people, was made one of the world’s richest men in his day for agreeing to follow God. In revealing Himself to mankind, God chose Israel to show forth the blessing that came from being in a covenant relationship with Him, and in the time of David and Solomon Israel was the richest most powerful nation on earth. Even today a disproportionate share of the world’s intellectual and financial wealth is enjoyed by the people God chose as His own.

When America called itself Christian and subscribed to what’s been labeled the protestant work ethic we were blessed above all nations in history, accomplishing things no other nation on earth could handle, and “Yankee Ingenuity” was thought to be equal to any challenge. Our country was richer, our standard of living higher and our kids brighter than any others ever.

Slowly but steadily we’ve taken Him out of the equation that made our society great and as we did we abandoned His principles as well. Many now look to the government as the source of blessings, while others look only to themselves. So the enemy has counterfeited Biblical principles and is making them work to his glory, while those of us who follow the Lord have yet to realize that by following these same principles we’ll manifest blessings beyond our wildest imagination and glorify the true Author of all our success.

Hear The Word Of The Lord

– Delight yourselves in Me, and I’ll give you the desires of your heart (Psalm 37:4).

– Study My Word day and night and quote it often. Do everything it tells you and you will be prosperous and successful (Josh 1:8-9).

– Trust in Me and stop trying to figure it out on your own. Give Me the credit and I’ll keep you on the straight and narrow.

– Give Me the 10th that’s Mine, and I’ll throw open the floodgates of heaven and pour out so much blessing you won’t be able to stand it (Malachi 3:9-10).

– Give and it will be given to you. A good measure pressed down shaken together and running over will be poured into your lap.

– Rejoice in Me always. Be fearful of nothing, pray about everything, and be thankful for anything, and I’ll give you peace that transcends human understanding (Phil 4:4-7).

– And when you are remember Who it was that gave you the ability to attain wealth (Deut. 8:18).

This is your destiny. Achieve it and you’ll bring the greatest honor imaginable to the One Who made it so.

Substance Abuse By A Loved One

Substance Abuse By A Loved One By David L. Goetsch Substance abuse is a problem…

Self-Centeredness By David L. Goetsch As a rule, human beings are self-centered; it’s a characteristic…

Impatience By David L. Goetsch Do you become antsy when standing in a long line?…

Ingratitude By David L. Goetsch There are times in all of our lives when it…

Unclean! By Tim Moore Imagine being consumed by a disease that forced you to isolate…