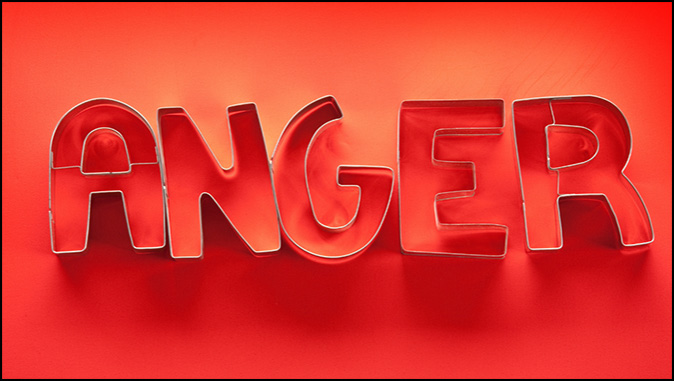 Anger is a strong feeling of annoyance that occurs as a result of irritation, frustration, or stress. It can range from feelings of mild annoyance to uncontrollable rage. Our anger usually shows itself when things aren’t going our way or people aren’t doing what we want them to. Factors we allow to arouse our anger range from betrayal at one end of the spectrum to minor perturbances at the other. One person might become angry when lied to by a loved one. Another might become angry when a driver sits through a green light while texting.

We see the consequences of anger all around us in such tragedies as road rage, broken marriages, gun violence, sideline rage, and mob violence. Anger can be a destructive emotion, and often is. The bad news is that anger is part of our sinful nature, a part Satan uses to tempt us into behaving badly. The good news is anger can be controlled, prevented, and overcome.

Jerry is a good provider for his family, a top performer at work, and a reliable deacon in his church. Unfortunately, Jerry is also a deeply angry person. In fact, the most prominent aspect of his personality is anger. He is often snaps at his wife, yells at his children, and publicly berates his employees. When driving, Jerry impatiently blows his horn at other drivers. In recent months, Jerry’s anger has begun to cause serious problems. He and his wife hardly speak, his children avoid him, an employee has filed a grievance against him, and a driver who was offended by Jerry’s horn blowing followed him home and threatened him with bodily harm.

One of the pamphlets Jerry read on anger management was produced by a Christian counseling center. It made the point that anger is a sin problem and must be treated as such if it is to be overcome. After mulling it over for several days, Jerry decided to approach his pastor for help. He was reluctant to speak with his pastor, not wanting to admit he had an anger problem. Jerry feared losing his position as a church deacon. Consequently, he was surprised to learn Pastor Amos already knew about his anger problem. In fact, when Jerry made the appointment, Pastor Amos had already decided to call him because of complaints from church members about Jerry’s terseness and impatience with them.

Pastor Amos was well known for his straight-forward approach to dealing with problems. The first thing he said to his deacon was, “Jerry, Satan is using your temper to rule your life. Since Satan is the problem, Jesus Christ is the answer. Satan is making you view yourself as God so you can justify expecting everybody in your life to do what you want, when you want, and how you want. This is why you consider your anger righteous and why you deem those who make you angry justifiable targets for your wrath. Therefore, the key to overcoming your anger is to acknowledge that you are not God. You are another sinner just like the people who arouse your anger. Every day you make God as angry as the people in your life make you, yet God graciously forgives you when he could just as easily strike you down in a fit of wrath.”

Pastor Amos opened his Bible to Romans 12:17-21 and asked Jerry to read the verses out loud. Jerry read: “Repay no one evil for evil, but give thought to do what is honorable in the sight of all. If possible, so far as it depends on you, live peaceably with all. Beloved, never avenge yourselves, but leave it to the wrath of God, for it is written, ‘Vengeance is mine, I will repay, says the Lord.’ To the contrary, ‘If your enemy is hungry, feed him; if he is thirsty, give him something to drink; for by doing so you will heap burning coals on his head.’ Do not be overcome by evil, but overcome evil with good.”

“Jerry, you need to commit to showing everyone in your life the same level of grace God shows you every day.” Pastor Amos then asked Jerry read aloud Ephesians 4:31-32: “Let all bitterness and wrath and anger and clamor and slander be put away from you, along with all malice. Be kind to one another, tenderhearted, forgiving one another, as God forgave you.” He asked Jerry to pray about these verses and come see him again in a week.

Jerry did pray, but it didn’t take him a week to see the error of his ways. Two days later, Jerry was a different man. He gathered his wife and children together and apologized for his anger. Jerry went individually to every employee he had publicly berated and apologized. Finally, he sought out fellow church members he had been impatient with and apologized to them. Rather than angry, Jerry became “kind,” “tenderhearted,” and “forgiving.” The change brought major change to his life, all of them good.

Whatever Happened to Responsibility and Accountability? – (Galatians 6:5)

Whatever Happened to Responsibility and Accountability? - (Galatians 6:5) By Dr. David L. Goetsch “Whatever…

Stop Living in Fear - (Proverbs 29:25) By David L. Goetsch What are your inner-most…

Conquering Insecurity and Self-Doubt: Stop Fishing in the Wrong Pond - (Philippians 4:6) By Dr.…

The Power of Kindness - (1 Corinthians 13) By Dr. David L. Goetsch The meeting…