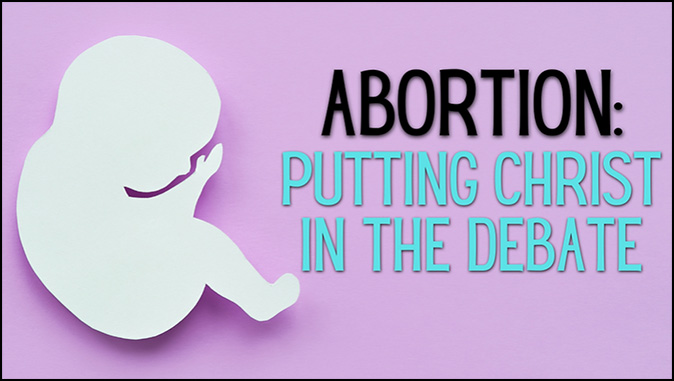 Abortion is much in the news these days. Since the U.S. Supreme Court overturned Roe v. Wade, there have been demonstrations, protests, and riots instigated by pro-abortion advocates. There has even been an attempt to murder a supreme court justice. The debate over abortion is heated and often ugly. All too often, what is missing in the debate is Jesus. How would Jesus Christ deal with a mother considering an abortion? Answering this question is where you and I — every day Christian believers — come in.

Whereas engaging the in political process, participating in demonstrations, and supporting anti-abortion initiatives are all things Christians can do to help stem the tide of abortion, there is something much more important we can do: show desperate pregnant women abortion is not their only option. They have another option — a better option. In doing so, show them not the angry face of opposition and condemnation but the comforting face of Christ. Here are some practical things you can do to save the lives of innocent unborn babies while showing their mothers the face Christ:

– Put the mother who is contemplating an abortion in touch with mothers who have gone through the process and now regret it. Few people can make a stronger case against abortion than mothers who have submitted to one and now regret their “choice.” The Silent No More Awareness Campaign is an organization that gives women who have had an abortion but now wish they hadn’t a forum for expressing their regrets. The Campaign began in 2002. Since that time the organization has held more than 2,000 “I Regret My Abortion” events in all 50 states in the United States as well as 17 foreign countries. Almost 7,000 women (and men) have shared their testimonies of regret at these events. The Silent No More Awareness Campaign can be contacted at the following web address: www.silentnomoreawareness.org

– Referring “pro-choice” mothers to this organization can have a powerful effect on their decision concerning whether or not to have an abortion and whether or not to continue supporting abortion. One of the goals of the Silent No More Awareness Campaign is to educate the public and those who might choose to have an abortion about the harmful physical, emotional, and spiritual effects of the procedure. Hearing the testimonies of women who had an abortion and now regret it is a powerful way to make the case against abortion.

– Refer women — particularly ardent feminists — who are contemplating an abortion to the organization, Feminists for Life. This organization’s motto — “Women Deserve Better®” — is a powerful indictment not just of abortion, but of the factors that drive women to have abortions. The vision of Feminists for Life includes this statement: “A world in which pregnancy, motherhood, and birth-motherhood are accepted and supported.” Many feminists are abortion advocates. Consequently, this organization can be particularly helpful when you are trying to speak the truth in love to a woman who is “pro-choice” and also a feminist. Feminists for Life may be contacted at the following web address: www.feministsforlife.org

– One of the most important things you can do to prevent abortions is let pregnant women know they have other options. When speaking the truth in love to women considering an abortion, it is important for Christians to do more than just refute their attempts to justify the unjustifiable. In addition, be prepared to inform pregnant mothers who are considering an abortion about alternatives available to them. This is important because many pregnant women choose abortion out of desperation rather than philosophical acceptance of the concept. Many think they have to have an abortion because it is the only option available to them. It’s not. When it comes to “choice” there are choices other than abortion. According to Focus on the Family, there are almost 3,000 pregnancy resource centers (PRCs) in the United States. Some PRCs provide assistance to pregnant women in the form of information and counseling while others provide these kinds of help as well as medical services. PRCs help mothers address the decision about having the child they are carrying and options available to them after the child is born, including adoption. Some PRCs provide baby supplies including formula, diapers, and clothing to mothers who choose to give birth. There are three ways pregnant women can find a PRC near them:

1. Go to www.OptionLine.org (then enter your zip code)