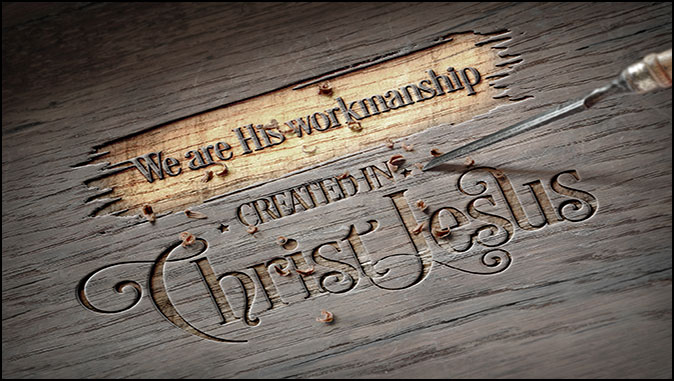 A New Race of Human…Commentary on Ephesians, Part 2
By Jack Kelley

“His purpose was to make in Himself one new man (the Church) out of the two (Jew and Gentile), thus making peace and in this one body to reconcile both of them to God through the cross by which He put to death their hostility.” (Ephesians 2:15-16)

Last time we saw how at the cross, the Lord had done nothing less than create a new race of human. Taken from among both Jew and Gentile, but sharing a destiny with neither, the Church would here after be known as a separate and distinct subset of the Human Race, the only one fit to dwell in the presence of God and the only one honored as co-heir with the Lord Jesus. Because the Man from Heaven had been outfitted for Earth, men from Earth could now be outfitted for Heaven.

We have been redeemed, all our sins forgiven, and the moment we accept all this the Holy Spirit comes to dwell within us as a deposit guaranteeing our inheritance. The Greek word translated deposit, by the way, is a legal term from which we get the Real Estate phrase “earnest money deposit.” Paying it creates a legally binding obligation to follow through on an agreed purchase. It’s what allowed Paul to say, “You are not your own, you have been bought with a price.” (1 Cor. 6:20) Think of it as putting us on lay-away. We’ve been taken off the shelf and cannot be bought by anyone else. One day soon He’ll come back to pick us up and take us home.

“For this reason I, Paul, the prisoner of Christ Jesus for the sake of you Gentiles– Surely you have heard about the administration of God’s grace that was given to me for you, that is, the mystery made known to me by revelation, as I have already written briefly. In reading this, then, you will be able to understand my insight into the mystery of Christ, which was not made known to men in other generations as it has now been revealed by the Spirit to God’s holy apostles and prophets. This mystery is that through the gospel the Gentiles are heirs together with Israel, members together of one body, and sharers together in the promise in Christ Jesus.” (Ephesians 3:1-6)

In beginning the portion we call chapter 3 Paul stopped in the middle of a thought to tell a secret only hinted at in earlier times, but now revealed through him. By the way, the Greek word translated administration in the passage above is also translated dispensation and becomes a title of the Church Age, the Dispensation of Grace.

It’s not our purpose to go into a study on Dispensationalism here, but suffice it to say that God has tried to relate to His creation in several ways through the millennia, and each one has ended in failure. He hasn’t done this in an effort to discover a way to successfully relate to us, but so that we can learn that as long as our sin problem continues, there is no way. In any case, some have called these attempts dispensations.

Each one has begun with an approach by God to man, and the establishment of a relationship with clear terms and conditions. Every time, man has soon violated those terms causing God to terminate the agreement and pronounce a judgment on man.

Scholars divide the Age of Man into 7 dispensations, the first being called the Dispensation of Innocence. It was an agreement between God and Adam and contained only one condition; don’t eat from the tree of the knowledge of good and evil. You know how that one turned out.

Then came number 2, the Dispensation of Conscience, where man was trusted to “do the right thing.” Between the times of Cain and Noah, man demonstrated that left to his own devices every inclination of his heart soon became evil, so the Great Flood washed them all away, except Noah and his family.

Dispensation number 3 is called Human Government, where, after the flood man was permitted to govern himself in a form of society within a loose set of rules given to Noah. That one ended with the judgment on the Tower of Babel and the confusion of languages.

The Dispensation of Promise, number 4, related primarily to Abraham and the setting apart of His descendants. It began with God’s promise to Abraham concerning the Promised Land. It ended with the deaths of the generation of Israelites Moses brought out of Egypt for their refusal to enter the Land.

The Dispensation of the Law is number 5. It was based on obedience to the Mosaic Law, summarized in the 10 Commandments, in return for the blessing of dwelling safely in the Land and enjoying its prosperity. It ended with the 1st Coming of Jesus, and the eventual scattering of the people.

And that brings to number 6, Dispensation of Grace. The approach God is making to us in this dispensation is based on the granting of a pardon for all our sins to all who will accept, whether Jew or Gentile, irrespective of merit. Freed from the Law, we need only accept God’s pardon in faith that His atonement for our sins will save us. (So we’re back to one requirement.) While some will accept this agreement, many more will not, requiring an end of this dispensation and a judgment, which climaxes at the 2nd Coming.

The 7th and final dispensation, the Millennial Kingdom, is built upon the perfect rule of the Lord Jesus, with the devil bound for 1000 years. It ends with the judgment of Satan and his followers.

In these seven dispensations, God has proven to man that until He Himself removes all our imperfections and reverses the effects of our sin nature, there is no condition or circumstance in which our behavior can achieve the standard His Holiness requires for co-existence. His creation of the Church as a new Race of Human, imputing His Righteousness to us through His vicarious atonement for our sins, accomplishes in full what no other means could even approximate.

“I became a servant of this gospel by the gift of God’s grace given me through the working of his power. Although I am less than the least of all God’s people, this grace was given me: to preach to the Gentiles the unsearchable riches of Christ, and to make plain to everyone the administration of this mystery, which for ages past was kept hidden in God, who created all things. His intent was that now, through the church, the manifold wisdom of God should be made known to the rulers and authorities in the heavenly realms, according to his eternal purpose which he accomplished in Christ Jesus our Lord. In him and through faith in him we may approach God with freedom and confidence. I ask you, therefore, not to be discouraged because of my sufferings for you, which are your glory.” (Ephesians 3:7-13)

The Church age, in which Jew and Gentile would be brought together in Christ to form a 3rd race of human was foreknown by God before He created the world, but kept secret till after the cross. Coming from both Jew and Gentile but sharing a destiny with neither, the Church is God’s final and decisive blow to Satan’s rebellion. Guilty of all of Satan’s sins, but washed clean in the Blood of The Lamb, the Church is elevated above the other races of man, past the angelic realm and even beyond Satan’s former exalted position to Heaven’s highest office for created beings, co-regent with the Lord Jesus in ruling the Universe, and co-heir in His inheritance.

“For this reason I kneel before the Father, from whom his whole family in heaven and on earth derives its name. I pray that out of his glorious riches he may strengthen you with power through his Spirit in your inner being, so that Christ may dwell in your hearts through faith. And I pray that you, being rooted and established in love, may have power, together with all the saints, to grasp how wide and long and high and deep is the love of Christ, and to know this love that surpasses knowledge–that you may be filled to the measure of all the fullness of God.” (Ephesians 3:14-19)

Thank You, Father for this most magnanimous gift. Please give us first the ability to comprehend its vastness, and second the humility to administer it with the same grace with which it was bestowed.

“Now to him who is able to do immeasurably more than all we ask or imagine, according to his power that is at work within us, to him be glory in the church and in Christ Jesus throughout all generations, for ever and ever! Amen.” (Ephesians 3:20-21)

How to Respond When Your Faith is Challenged

How to Respond When Your Faith is Challenged By Dr. David L. Goesch Secular humanism,…

Your Truth, My Truth, or God’s Truth?

Your Truth, My Truth, or God's Truth? By Dr. David L. Goetsch Truth is defined…

Road Rage: How Should You Respond?

Road Rage: How Should You Respond? By Dr. David L. Goetsch We have all had…

Whatever Happened to Responsibility and Accountability? – (Galatians 6:5)

Whatever Happened to Responsibility and Accountability? - (Galatians 6:5) By Dr. David L. Goetsch “Whatever…

Stop Living in Fear - (Proverbs 29:25) By David L. Goetsch What are your inner-most…