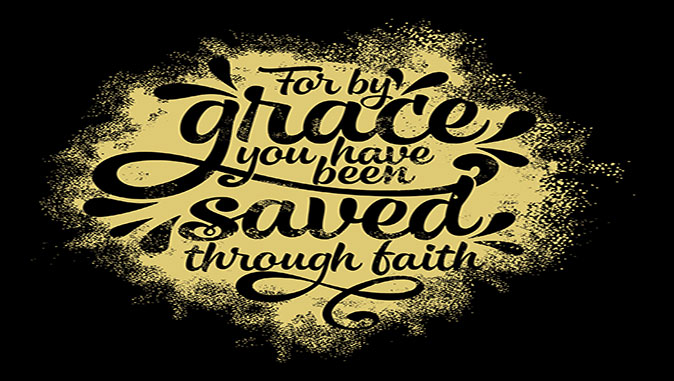 A Lazy Grace
By Jack Kelley

What if God had made the same half-hearted mediocre effort in providing the gift of salvation that many of us make in saying thanks for it?

“Therefore I urge you, brothers and sisters, in view of God’s mercy to offer your whole beings as living sacrifices, holy and pleasing to God – this is your spiritual act of worship.” – (Romans 12:1)

One of the dangerous but all too human by-products of the Age of Grace is the attitude among some Christians that “I’ll do what I can without inconveniencing myself too much and the Lord will understand and make up the difference.” Some folks think a less-than-best effort on their part will be acceptable to God, Who forgives all things (including the indifference this attitude demonstrates). Others, more concerned about man’s opinion than God’s are afraid they’ll be accused of being on a “works trip” if they put forth their maximum capability.

True, we as humans could never have deserved the gift of salvation before the fact, and can never do enough to merit to its benefits after the fact, that’s why it’s called a gift of grace. But does that justify our ambivalence to the incredible price our Lord paid to provide it without cost to us? Has God’s Grace produced a “take-it-for-granted” response from us? What if He had made the same half-hearted mediocre effort in providing the gift that many of us make in saying thanks for it?

I’ve been involved in organized religion for decades and am amazed at how little some in the body of Christ do to express their gratitude to the One who has rescued them from the coming wrath (1 Thes. 1:9-10). They come to Him with a “what have you done for me lately” attitude, informing Him of their current worldly wants and needs and expecting results, but expend precious little effort in conveying their gratitude even for the things He did for them yesterday, let alone the priceless and eternal gift He provided 2000 years ago.

What Do You Mean By That?

Let’s take just one example: the Sunday Service. I have been invited as a guest speaker to many congregations and for several years served as a volunteer pastor. I am appalled at the cavalier approach some Christians take to worship. Here we are, coming into the presence of the Living God, our Creator, Savior and Redeemer, the One to Whom we owe our very lives, and some can’t even arrive on time. They think the praise and worship time at the beginning is a “grace period” and they’re not really late for the service if they get there before the last song ends. They not only don’t see the importance of giving thanks themselves but interrupt and disrupt others’ attempts to do so.

Some arrive unclean or unkempt as if they just woke up and threw on the first outfit they could find, others as if they’re going to a singles bar or health spa. They pay scant attention to what’s going on, distracted by other events in their day (or who they’re really there to meet), and as they leave they drop only as much as they’re sure not to miss into the offering. I have often wondered why they even bother. It seems to me as if their presence is more an insult to God than a blessing. All form and no substance.

Even so-called workers sometimes put forth mediocre efforts saying, “That’s good enough. The Lord will understand.” They accept the job reluctantly, and then prepare and perform it half-heartedly. As a result the building isn’t really clean, the music isn’t really inspiring, and the Sunday School lesson isn’t really stimulating. Of course the Lord understands, but is that the way we would thank anyone else for saving our lives? Doesn’t He deserve our very best?

During the time Bill Clinton was President many of us were really put off by his behavior, but I often remarked that had we been invited into his presence in the White House, we would have taken great pains to arrive on time, all cleaned up and in our “Sunday Best” (remember when that phrase meant something special?) eager to make the most of the occasion. Why don’t we see a visit to the Lord’s house in the same light?

An Attitude Of Gratitude

Never mind for the moment the countless opportunities we miss to pass on a little of the love He so generously showers down on us, He always finds someone else to do that. Just focus on the one thing no one else can do for us, express our gratitude to Him for all He’s given us. If we get that part right, I believe everything else will come along just fine.

Think of the times you’ve given gifts to your children. You obviously expect their gratitude and anticipate it with great joy, but even rejection of a gift can be understood and dealt with. The reactions that are both frustrating to the giver and impossible to resolve are indifference and ingratitude. You can’t make someone feel grateful. Have you truly and from the bottom of your heart given thanks to God lately for saving your life and blessing you beyond calculation? Or are you acting like the indifferent child in His eyes?

If none of what I’ve said above applies to you, I apologize for wasting your time. If you’ve been convicted by any of it, I encourage you to pray hard about changing your attitude toward worship. If I’ve offended you I admonish you to put aside your justifications and ask the Lord for confirmation. And remember it’s not what you do that counts but the intent of your heart while doing it. (1 Cor. 4:5). As the Lord told His disciples, “Freely you have received, freely give.” (Matt 10:8) It applies to thanksgiving as well as acts of service.