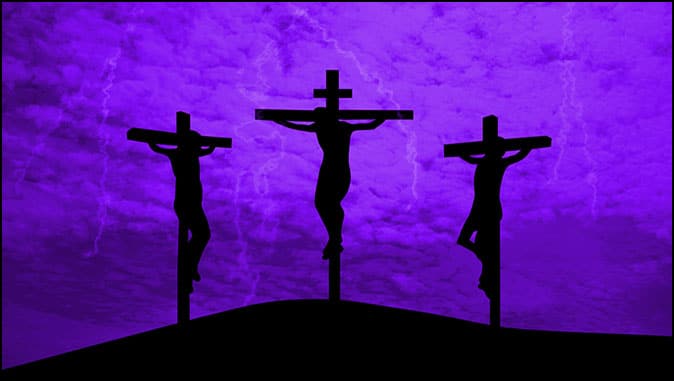 Which Side Of The Cross Are You On?
By Grant Phillips

“For I say to you that this which is written must still be accomplished in Me: ‘And He was numbered with the transgressors.’ For the things concerning Me have an end.” – (Luke 22:37 from Isaiah 53:12)

“Therefore I will divide Him a portion with the great, And He shall divide the spoil with the strong, Because He poured out His soul unto death, And He was numbered with the transgressors, And He bore the sin of many, And made intercession for the transgressors.” – (Isaiah 53:12)

Doctor Luke reminds us all of Isaiah’s prophecy that the Lord Jesus went to the cross for you and me. He paid the price for our redemption that we could never pay. The entire fifty-third chapter of Isaiah prophesies the life and death of Jesus, and what He accomplished on our behalf. Further, chapter twenty-two of Psalm records Jesus time upon the cross.

When Jesus hung upon that cross for us, there were two thieves crucified with Him, one on each side. This is recorded in all four of the Gospels.

Two Crucified with Jesus that Day

“Then two robbers were crucified with Him, one on the right and another on the left.” – (Matthew 27:38)

As we visualize these two on each side of Jesus, we know that Jesus is pure and undefiled by sin. There is no guilt in Him. He is totally innocent of any wrong. However, on each side of Him are two rascals, with hearts as black as coal.

The Bible tells us that those who passed by hurled insults at Jesus, then the chief priests, teachers of the law and the elders joined in. Finally, the two thieves who were hanging on crosses beside Him did the same.

“Even the robbers who were crucified with Him reviled Him with the same thing.” – (Matthew 27:44)

“Let the Christ, the King of Israel, descend now from the cross, that we may see and believe.” Even those who were crucified with Him reviled Him.” – (Mark 15:32)

Notice that both, not just one of them, but both of the thieves reviled against Jesus for the predicament they had gotten themselves into. They were guilty, but He was not. They hated Him for their misery.

Something happened in the heart of one of these men though. Let’s listen to what they now have to say.

One Saved – One Not Saved

Then one of the criminals who were hanged blasphemed Him, saying, “If You are the Christ, save Yourself and us.” But the other, answering, rebuked him, saying, “Do you not even fear God, seeing you are under the same condemnation? “And we indeed justly, for we receive the due reward of our deeds; but this Man has done nothing wrong.” Then he said to Jesus, “Lord, remember me when You come into Your kingdom.” And Jesus said to him, “Assuredly, I say to you, today you will be with Me in Paradise.” – (Luke 23:39-43)

One thief kept cursing Jesus, wanting Jesus to save him…physically, but the other repented, and simply asked Jesus to save his soul. Jesus promised him that that very day he would be with Him in Paradise. One man followed Jesus to Abraham’s bosom in paradise, while the other was in torment in Hades. One is now with Jesus in Heaven, while the other awaits judgment at the great White Throne judgment and will then spend an eternity in the lake of fire.

Most today are more interested in their physical well-being than they are about their eternal soul. Each and every one of us is going to spend eternity in one of two places…no exceptions. We will either be with Jesus in Heaven for all eternity, or we will be in hell for all eternity.

We are all guilty, and these two thieves represent mankind. One will spend eternity with Jesus. The other will spend eternity with Satan in hell. Which thief are we going to follow? I don’t know if it was the thief on the right or left of Jesus that repented and asked Jesus to save him. It doesn’t matter. Either way, which side of the cross are we on? Are we on the side of Jesus that repents and asks that He save our soul, or are we on the side that will continue to curse the only one who can save us?

Please read again Isaiah 53 and Psalm 22, and really think about the price Jesus paid for us all. Everyone of us deserves to be hanging on a cross like those two thieves, but it would do no good anyway. The only lamb that God will accept for our sacrifice is the Lamb of God, and we can only go to God the Father through His Son, Jesus Christ.

Jesus died, was buried and rose again the third day just as He said He would, and when He returns it will be as King of kings and Lord of lords, not as the Lamb.

Be on the right side (correct side) of the cross by repenting (changing your mind) and putting all your trust in Him to save you and make you a member of His family for eternity.

And They Cursed God

From The Lintel To The Cross

Now is the Time!!

Now is the Time!! By Jonathan C. Brentner If there ever was a time in…