Is Joshua Harris Now Going To Hell?
By Bill Perkins

Recently Joshua Harris, a successful Christian author who wrote the bestselling book “I Kissed Dating Goodbye” in the 1990s, publicly renounced his faith.

Due to his staunch Biblical stance regarding no sex before marriage, many young Christians read his books and followed his advice. So this was a shocker, to say the least.

In a nutshell, Harris is clearly saying he no longer believes the Bible, pretty much giving God the finger. So this begs the question, does this mean he’s now going to hell?

I’ve heard numerous Christian leaders trying to make sense out of this by saying things like “He was never saved in the first place” and “Jesus won’t leave you but you can leave Him.” However, neither of those statements is in God’s Word.

Only God knows Harris’ heart… whether or not he trusted the shed blood of Christ to cover his sins at some point of his life. But regardless, the question remains, if he was once “saved,” can he now be “not saved?”

Most people reading this know we teach and scripturally defend that there’s no “work” you can do, or not do, to become a Believer. You can only believe the Gospel of Jesus the Messiah. It’s about what He did, not about your good or bad actions.

“He saved us, not on the basis of deeds which we have done in righteousness, but according to His mercy, by the washing of regeneration and renewing by the Holy Spirit,” Titus 3:5

“These things I have written to you who believe in the name of the Son of God, so that you may know that you have eternal life.” 1John 5:13

“Are you so foolish? Having begun by the Spirit, are you now being perfected by the flesh?” Gal. 3:3

WHAT ACTUALLY HAPPENS AT SALVATION?

When you trust the Gospel message—which is the Good News that if you BELIEVE Jesus came from heaven, lived a sinless life, shed His blood and died on a cross in order to pay for all your sins—God immediately saves you from the eternal fires of hell… forever.

Your sins—past, present and future—are wiped clean from God’s judgment and this allows God’s Spirit to come into your life permanently, sealing you forever.

“In Him, you also, after listening to the message of truth, the gospel of your salvation — having also believed, you were sealed in Him with the Holy Spirit of promise,” Eph. 1:13

So every Believer is sealed by God. Jesus even said He won’t lose anyone the Father has given Him.

“This is the will of Him who sent Me, that of all that He has given Me I lose nothing, but raise it up on the last day.” John 6:39

To make an even better case against losing your salvation, consider this verse:

“For I am convinced that neither death, nor life, nor angels, nor principalities, nor things present, nor things to come, nor powers, nor height, nor depth, nor any other created thing, will be able to separate us from the love of God, which is in Christ Jesus our Lord.” Rom. 8:38-39

You are a human, created by God. Therefore, as a Believer, you cannot even separate yourself from God. No matter what you say or do. God is more powerful than you.

So if you can’t lose the permanency of salvation, what happened to Joshua Harris, assuming he was a Believer? It has everything to do with his Biblical maturity. Salvation is just the beginning of your Spiritual walk.

ONE OF THREE THINGS HAPPENS TO BELIEVERS WHEN THEY GET SAVED—WHICH ONE APPLIES TO YOU?

The Bible puts a great emphasis on Believers maturing in their faith (Eph. 4:11-14), to “grow up” in order not to be tricked by their enemy Satan—who has spent the last 6000 years perfecting his lies.

“…but speaking the truth in love, we are to grow up in all aspects into Him who is the head, even Christ,” Eph. 4:15

Satan even tried lying to Jesus when he was tempting Him in the desert (Matt. 4:5-11). He quoted scripture to Jesus, and although the scripture was true, Jesus replied with “…the scripture also says…” In essence, He was telling Satan, “you’re taking scripture out of context.”

We too need to be able to know the Bible well enough to ward off Satan’s tricks and lies. But new Believers have so little scriptural defense they’re referred to as baby Believers (1Cor. 3).

The Parable of the Sower

In the Parable of the Sower in Luke 8:4-15, we see that when people hear the Word of God preached, the outcome is pretty simple: they either get saved or they don’t get saved.

Those that do get saved can have three different outcomes in their Christian life. So Jesus warns us about these life outcomes because our adversary, Satan, immediately sends his demons to compromise our walk. 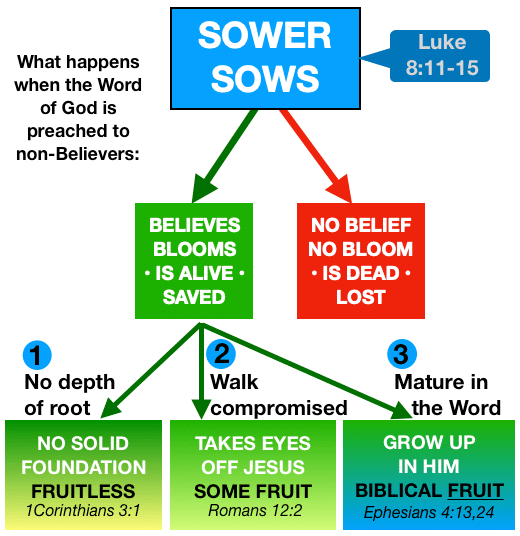 1) The first thing that can happen to a new Believer is to be tricked by Satan from maturing into a solid Believer. Satan’s first goal is to get new Believers to doubt the truth about what they just committed to. Because new Believers aren’t rooted in God’s Word, the tempter can lure them away with his lies.

“…they hear, receive the word with joy; and these have no firm root; they believe for a while, and in time of temptation fall away.” Luke 8:13

Satan’s lies could be about anything…sex, money, friendships, marriage, children, parents, church and everything in between. A series of seemingly innocent compromises is his age-old trick.

2) If Satan’s not successful getting you off course when you’re a new Believer, the second thing he’ll try is to get your eyes off the long-term prize. Satan knows if he can get you thinking short-term, he wins.

“…they are choked with worries, riches and pleasures of this life,” Luke 8:14

Satan will again bring on the lies about the burdens of life, worries about children, work, money…anything and everything to get your mind off the eternal prize that you’ve already won. If you fall for his deception, he wins.

3) The third thing that can happen to born-again Believers is that they mature, steel their minds with scripture, shake off the worries of the world and keep their eyes on the prize. God can use these mature Believers in numerous ways for His purposes.

“until we all attain to the unity of the faith, and of the knowledge of the Son of God, to a mature man…” Eph. 4:13

“I press on toward the goal for the prize of the upward call of God in Christ Jesus.” Phil. 3:14

So what about Joshua Harris? I think he is #2. I think he unknowingly let Satan get to him through the riches and pleasures of this life, choking out his testimony and grieving God with his sinful statements.

“Do not grieve the Holy Spirit of God, by whom you were sealed for the day of redemption.” Eph.. 4:30

Again, notice in that verse that sin did not “unseal” anything. When a Believer is saved, it’s forever.

I do pray Harris gets a handle on whatever is haunting him. I pray he repents and seeks again to follow the commandments of his Risen Savior. Thankfully, if he is a Believer, his security is unconditional. God will never leave him, even if he tries to leave God.

Always stand on the scriptural fact that our salvation is based on what He did for us, not what we once did, or now do, for Him. Therefore, teaching you can lose your salvation based on sin (repentant or unrepentant) violates this basic Biblical teaching.

This is why Paul, dealing with a horribly sinful and unrepentant Believer, said it would be better for Satan to kill some guy so he could be released from his sinful body and go home to be with the Lord.

“I have decided to deliver such a one to Satan for the destruction of his flesh, so that his spirit may be saved in the day of the Lord Jesus.” 1Cor. 5:5

This earth is nothing compared to eternity, so keep your eyes up!

Grace and the Rapture

Grace and the Rapture By Don McGee Crown and Sickle Ministries Unfortunately, most in the…

The Rich Man And Lazarus

Love, Justice, and Judgment By Dave Hunt Most of the world has little concern for…

Paid In Full By Grant Phillips “”Therefore when Jesus had received the sour wine, He…

The Works-Salvation Delusion By Dave Hunt "I do not frustrate the grace of God: for…