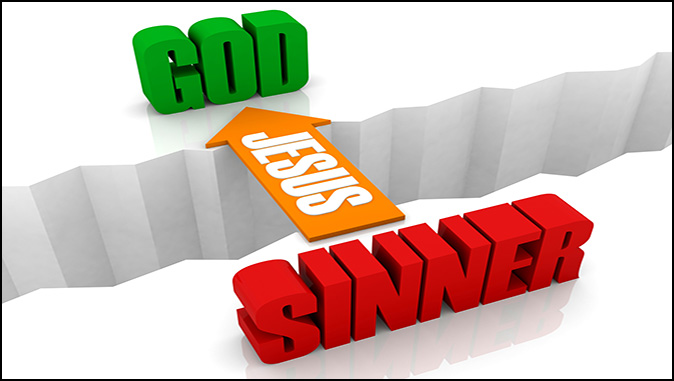 How Can A Sinner Become Right With God?
By Mike Gendron

The only way a sinner, who is condemned under God’s inflexible justice, can be made right with God is through faith alone in the substitutionary death and resurrection of the Lord Jesus Christ (Rom. 3:21-28). Jesus Christ satisfied divine justice so that God could be just and the justifier of the one who has faith in Jesus (Rom. 3:26). The sinless Savior went to the cross as a substitute for His people. He endured the wrath of God in the place of sinners who would repent and believe the Gospel. This is the heart of the Gospel and the hinge upon which the gates of heaven open and close.

• Justification is permanent and is never lost by sin. The legal status of a justified man is as unchangeable as the righteousness of Christ (Heb. 10:14).
• Rome says justification is temporal; it can be lost by sin and regained through the sacrament of penance and good works (CCC, 1446, 1861).

• God promises to glorify everyone He justifies because those justified can never be condemned (Rom. 8:1, 8:30).
• Rome says God will condemn to hell everyone who was justified by water baptism but who later dies in mortal sin (CCC, 1861).

One Verse Catholics Love to Quote

As we share the Gospel of grace with Roman Catholics, they will defend their dogma of justification by faith plus works with James 2:24 which says, “You see that a person is justified by works and not by faith alone.” It appears that James is teaching something inconsistent with the rest of Scripture. However, when we study the context of chapter two, we see that James is not teaching “how to be justified”, he is contrasting two kinds of faith – a genuine, God-given faith which is evidenced by good works, and a spurious, dead faith which shows no evidence of conversion.

Professors of Christ Who Do Not Possess Him

James is dealing with an issue that was prevalent in the first century church and even more widespread today. We have many professors of Christ who do not possess Christ because they have never been born again. They are victims of the worst kind of deception, believing they are Christians when they are not. The most terrifying words professing Christians could ever hear would be Jesus saying, “Depart from me, I never knew you” (Mat. 7:23). That’s why James exhorts his readers to “be doers of the word, and not hearers only, deceiving yourselves” (Jas. 1:22)

Works Are the Evidence of an Invisible Faith

James says, “show me your faith apart from your works, and I will show you my faith by my works” (James 2:18). Since faith is an invisible relationship between God and man, its only visible evidence are the works produced by faith. James is declaring that genuine faith will be accompanied by good works. In other words, we are justified by faith alone, but faith that justifies is never alone! Those with God-given faith have been given a new heart and a new nature that produces a changed life which bears fruit for the glory of God (John 15:4-8).

True believers may have times of unfruitfulness in their lives, but the pattern and direction of their lives will be characterized by an increasing pattern of righteousness and a decreasing pattern of sin. This process of sanctification is not about sinless perfection, but a righteous direction. Righteous behavior is what distinguishes dead faith from genuine faith. We enter into salvation by faith apart from works (Eph. 2:8-9), but after we are saved then we do the works God has prepared for us (Eph. 2:10).

It is also important to know that the Greek word for “justified” has two meanings. One is a legal or forensic declaration by God to those who have faith. Paul wrote: “having been justified by faith, we have peace with God through our Lord Jesus Christ” (Rom. 5:1). The other meaning is “to vindicate” or “to show” that someone is righteous. Abraham was justified (vindicated) “when he offered up his son Isaac on the altar” (James 2:21). Abraham did not need to be justified again because God had justified him by faith alone many years before (Gen. 12:1-7, 15:6). His obedience to God vindicated his genuine faith. James is using Abraham as an example of believers who have been justified; their faith is also vindicated by their works.

May we all be ready to defend this vitally important doctrine of justification when we witness to Roman Catholics. We must boldly proclaim that the only way repenting sinners can be justified by our Holy God is by grace alone, through faith alone, in Christ alone, according to Scripture alone, for the glory of God alone!

You can listen to Mike’s message on Evangelizing Catholics God’s Way here.