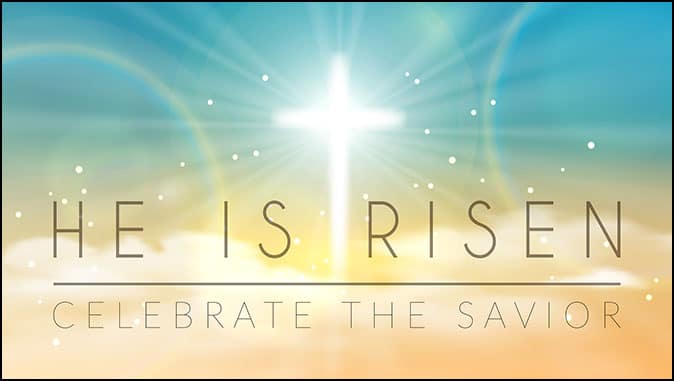 He Is Risen
By Grant Phillips

Most messages I have heard concerning the Gospel speak more of the cross of Christ than His resurrection, but if the Bible did not contain the words, “He is risen,” none of us would have any hope for eternity. We would all be damned to an everlasting hell. It would seem to me that both the cross and the empty tomb are of equal importance. One cannot stand without the other.

Every human being from Adam to the last person who will be born upon this earth needs a Savior. When our original parents, Adam and Eve, succumbed to the temptation of Satan, sin corrupted all that God had made. We were given a choice, obey God or listen to Satan, and we chose to listen to Satan and forfeit our companionship with God in that beautiful Garden of Eden. Also, let us not be too critical of Adam and Eve. Would we have done any better? I think not.

Anyway, from that fall from innocence to guilt, all of us now must make the same choice individually. I can’t decide for you and you cannot decide for me who to follow, Satan or God, but we must decide before our life ends upon this earth.

“Well then, should we conclude that we Jews are better than others? No, not at all, for we have already shown that all people, whether Jews or Gentiles, are under the power of sin.

As the Scriptures say,

“No one is righteous — not even one.

No one is truly wise; no one is seeking God.

All have turned away; all have become useless.

No one does good, not a single one.”

“Their talk is foul, like the stench from an open grave. Their tongues are filled with lies.”

“Snake venom drips from their lips.”

“Their mouths are full of cursing and bitterness.”

“They rush to commit murder. Destruction and misery always follow them. They don’t know where to find peace.”

“For everyone has sinned; we all fall short of God’s glorious standard.” (Romans 3:23)

Adam and Eve were privileged to walk with God in the Garden of Eden, but after sin was found in them due to their disobedience, they could never look upon His face and live. That includes all their progeny … you and me.

Since sin entered the world, its effects have been devastating for us all, but there is light at the end of the tunnel. Death reigns in our bodies, but we can have eternal life through Jesus.

“When you were slaves to sin, you were free from the obligation to do right.

And what was the result? You are now ashamed of the things you used to do, things that end in eternal doom.

But now you are free from the power of sin and have become slaves of God. Now you do those things that lead to holiness and result in eternal life.

For the wages of sin is death, but the free gift of God is eternal life through Christ Jesus our Lord.” (Romans 6:20-23)

That life comes from the death, burial and resurrection of Jesus Christ, the Son of God.

“I passed on to you what was most important and what had also been passed on to me. Christ died for our sins, just as the Scriptures said.

He was buried, and he was raised from the dead on the third day, just as the Scriptures said.

He was seen by Peter and then by the Twelve.

After that, he was seen by more than 500 of his followers at one time, most of whom are still alive, though some have died.

Then he was seen by James and later by all the apostles.

In this passage alone, the Bible makes it clear that Jesus did die. He did not swoon and just pass out. He did not somehow survive the ordeal on the cross. He died “according to the scriptures.” He gave up His Spirit and His body died.

The passage then says that He was buried. Only a body that is dead is buried. Jesus’ body was buried in a tomb “according to the scriptures,” but His Spirit was not in the tomb.

And then in the last verse it is stated, “And that He was seen…” Hundreds of people saw Him in His resurrected body after He was crucified, buried and raised from the dead. HE IS RISEN!

If you and I had died on that cross we would still be under condemnation. Only one without sin could die and pay our sin penalty, but Jesus isn’t just a man without sin, as was Adam in the beginning. He is God in human flesh. His righteousness and purity are far beyond even our thoughts. As the holy God He laid aside His glory, but not His deity, and became one of us. He fulfilled the Law for us, which we could never do.

Why is it important that Jesus fulfill the Law on our behalf?

“But those who depend on the law to make them right with God are under his curse, for the Scriptures say, “Cursed is everyone who does not observe and obey all the commands that are written in God’s Book of the Law.”

So it is clear that no one can be made right with God by trying to keep the law. For the Scriptures say, “It is through faith that a righteous person has life.”

This way of faith is very different from the way of law, which says, “It is through obeying the law that a person has life.”

But Christ has rescued us from the curse pronounced by the law. When he was hung on the cross, he took upon himself the curse for our wrongdoing. For it is written in the Scriptures, “Cursed is everyone who is hung on a tree.”

Through Christ Jesus, God has blessed the Gentiles with the same blessing he promised to Abraham, so that we who are believers might receive the promised Holy Spirit through faith.” (Galatians 3:10-14)

“For the person who keeps all of the laws except one is as guilty as a person who has broken all of God’s laws.” (James 2:10)

Thankfully, Jesus fulfilled the Law for us, died for us, was buried and rose again on the third day, all according to the scriptures. Our hope is in the RISEN JESUS who is now in Heaven.