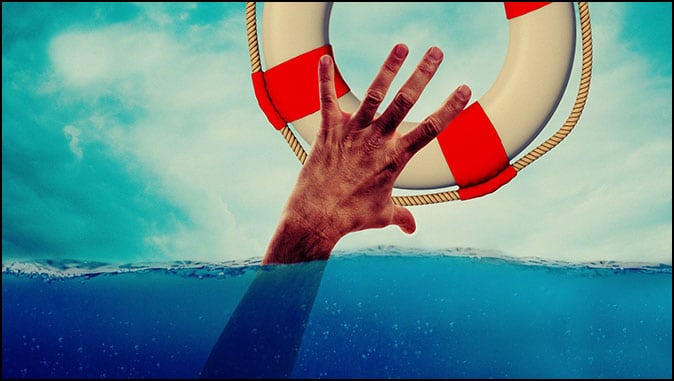 Greatest Rescue Of All Times
By Grant Phillips

Almost every day, somewhere around the world, someone is being successfully rescued by caring people.

Here in the states, most of us will remember Jessica McClure (Baby Jessica) who was rescued from an 8” well in Midland, Texas. She was only 18 months old at the time, and it took her rescuers three days back in October of 1987 to get her out.

This is only one example among so many who have had their lives spared. Sadly, there are just as many who were not able to be rescued before it was too late.

It is very heartwarming when we hear of successful rescues of children, adults and even animals. We don’t like death, and what a relief when it is dodged for a time.

God doesn’t like death either, and before someone gets their tail feathers in a knot, God did not bring death upon us. We did that to ourselves. Someone else will say that Adam and Eve did that, but think about it. Would we have done any better? No, we would not have. Satan is a lot sharper knife in the drawer than any of us. We wouldn’t even make a good butter knife.

Nevertheless, because of that decision by our first parents, everyone sins and everyone dies. For over 6,000 years we have had to deal with this monster. The good news is that right from the beginning God had the solution.

“And I will put enmity between thee and the woman, and between thy seed and her seed; it shall bruise thy head, and thou shalt bruise his heel.” (Genesis 3:15)

Even before mankind fell into sin and brought death upon us all in the Garden of Eden, God already knew what would happen and had a plan ready from the start. This plan was and is today that He would pay for all our sins by taking our punishment for us upon a Roman cross.

Satan keeps pumping out the lie that there are several ways we can save ourselves, but wait a minute; he is the one who got us into this mess in the first place with his lying. God doesn’t lie, and couldn’t lie if He wanted to, and He says there is only one way we can be saved and that is that one without sin must pay our sin debt. However, there is a problem:

“As it is written, There is none righteous, no, not one: There is none that understandeth, there is none that seeketh after God. They are all gone out of the way, they are together become unprofitable; there is none that doeth good, no, not one. Their throat is an open sepulchre; with their tongues they have used deceit; the poison of asps is under their lips: Whose mouth is full of cursing and bitterness: Their feet are swift to shed blood: Destruction and misery are in their ways: And the way of peace have they not known: There is no fear of God before their eyes. For all have sinned, and come short of the glory of God;” (Romans 3:10-18, 23)

No one can be found who is qualified. God can’t pay for our sins. He isn’t a human. He is God, but wait, God says that isn’t a problem. The Son of God simply came down to earth and clothed Himself in a human body and became a human. His Spirit entered the womb of a young female who loved God, and He was born from her body. How about that! The Son of God and the Son of Man! Now He is both, and fully qualified to pay for all our sins, and that is just what He did two thousand years ago.

(Note: Prior to the cross those who believed were saved on ‘credit,’ since they looked forward to the cross.)

This move by God is without a doubt the greatest rescue of all times. Every man, woman, boy and girl can be saved from Satan’s clutches if they just repent (change their mind) and ask Jesus Christ to save them.

How tragic it is that billions of people over the last 6,000 years have not accepted God’s way to be saved…the only way actually. That sin nature we inherited from Adam just keeps getting in the way for most folks. It keeps whispering; wait awhile, you’re good enough, God would never send you to hell, and all those other lies Satan loves to tell us.

Thank goodness there have also been billions that have realized they are sinners, need to be saved, and God has the only way that works. They realized Jesus paid their way to God and asked Him to save them too.

The great thing about God’s only way to Him through Jesus is that He loves us all and really wants us all to be saved. He makes no preferences. He doesn’t care if you’re poor or rich, what color you are or your nationality, etc. He just wants all to be saved, but He cannot and will not override His one requirement. That requirement is that we must come through His Son Jesus Christ. We must put our faith in Him and trust Him to do the saving. If we will do that, He will save us.

“For by grace are ye saved through faith; and that not of yourselves: it is the gift of God: Not of works, lest any man should boast.” (Ephesians 2:8-9)

“All that the Father giveth me shall come to me; and him that cometh to me I will in no wise cast out.” (John 6:37)

If we’re drowning at sea, stuck in a well, trapped in a fire, attacked by wild dogs, dying of an illness or a thousand other things that could take our life wouldn’t we want someone to save us? I’m sure the answer is a resounding, “YES!” Well in that case we’re just talking about our body, which is only going to live but a few years. If we live to be a hundred, our body is still going to die, but what about our soul? Our soul is going to live forever either in Heaven or hell.

What is more important to us, a few years on this earth, or an eternity that never ends … in Heaven or hell? God wants us to be with Him in Heaven forever, but we must come through His Son Jesus. If we refuse, there are no other options, except eternity in hell.

Rescue the perishing, care for the dying,
Snatch them in pity from sin and the grave;
Weep o’er the erring one, lift up the fallen,
Tell them of Jesus, the mighty to save.

Rescue the perishing, care for the dying,
Jesus is merciful, Jesus will save.

Though they are slighting Him, still He is waiting,
Waiting the penitent child to receive;
Plead with them earnestly, plead with them gently;
He will forgive if they only believe.

Down in the human heart, crushed by the tempter,
Feelings lie buried that grace can restore;
Touched by a loving heart, wakened by kindness,
Chords that were broken will vibrate once more.

Rescue the perishing, duty demands it;
Strength for thy labor the Lord will provide;
Back to the narrow way patiently win them;
Tell the poor wand’rer a Savior has died.

Her inspiration for this great old hymn came from this Scripture passage in the Bible:

“And of some have compassion, making a difference: And others save with fear, pulling them out of the fire; hating even the garment spotted by the flesh.” (Jude 22-23)

Jesus is our rescuer, but we must call out to Him. He died for us and will save us if we only believe.

To Be Found in Christ

Jesus Died for Your Sins: What Does this Mean?

Jesus Died for Your Sins: What Does this Mean? By Dr. David Reagan I was…

The Judgment of God

The Judgment of God By Dr. David Reagan Two of the most ignored subjects in…

What Did You Do With The Gift?

What Did You Do With The Gift? By Bud Hancock Christmas is one of the…