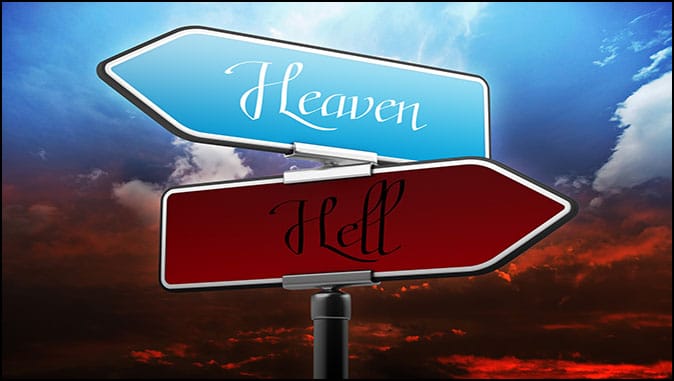 Tragically, many people go to their grave having been deceived about what happens after death. They need to know that their life will not be over after their last breath is taken. Rather, it is just the beginning of eternity which has no end. People will find themselves in one of two places. They will spend all of eternity either in a place of unimaginable joy and peace or in a place of misery and indescribable suffering. God’s Word says, “it is appointed for men to die once and after this comes judgment” (Heb. 9:27). Knowing this, it is puzzling how people often spend an inordinate amount of time investigating things of temporal value, but when it comes to seeking wisdom about eternity, many people cannot be bothered. It is because no one seeks after (the true) God and only a few find the narrow way that leads to life (Mat. 7:14, Rom. 3:11). Their lack of concern and lack of interest for the truth is disturbing and lamentable as they travel down the broad way to destruction (Mat. 7:13).

Some people blindly put their faith in religious leaders because they assume their leaders would never deceive them. Yet, the Lord Jesus warned us, “Beware of the false prophets, who come to you in sheep’s clothing, but inwardly are ravenous wolves” (Mat. 7:15). They are dangerous because they can easily deceive unstable souls with a false and fatal gospel. Paul also warned of false teachers in the church. He wrote: “…from among your own selves men will arise, speaking perverse things, to draw away the disciples after them. Therefore be on the alert, remembering that night and day for a period of three years I did not cease to admonish each one with tears” (Acts 20:30-31). Our only protection is to test every man’s teaching with the supreme authority of Scripture because “evil men and impostors will proceed from bad to worse, deceiving and being deceived” (Acts 17:11; 2 Tim. 3:13).

The Source of Spiritual Deception

Satan is the god and ruler of this world system of evil. He is the master deceiver, and the father of lies (John 14:30, 8:44; 2 Cor. 4:4). He knows people will rarely believe an outright lie, so he cleverly mixes truth with error to deceive the whole world (Rev. 12:9). Satan uses his lies to tempt, seduce, divide, blind, destroy and kill. His powerful seduction is on display throughout apostate Christianity. Paul forewarned us when he wrote: “The Spirit explicitly says that in later times some will fall away from the faith, paying attention to deceitful spirits and doctrines of demons” (1 Tim. 4:1). Professing Christians, who have never been born again, will turn away from God’s Word to follow demonic doctrines. While some Protestant churches have departed from the faith, Satan’s greatest and most deadly counterfeit of Christianity is the Roman Catholic Church. This deceitfully insidious religion hides its false and fatal gospel with a thin veneer of truth that seduces over a billion indoctrinated people. Religious deception is the deadliest kind of deceit because of its eternal consequences.

All the religions of the world teach the fatal lie that man must merit salvation through good works and religious activity. This “is a way which seems right to a man, but its end is the way of death” (Prov. 14:12). Only biblical Christianity proclaims salvation is by grace alone in the finished work of the Lord Jesus Christ alone. Anyone who embraces a works-righteousness salvation has nullified God’s grace, which is the only means by which God saves sinners (Rom. 11:6; Eph. 2:8-9; Titus 3:5). Satan knows this, which is why he has created all his “grace-nullifying” religions which all lead to death. God’s truth must expose this fatally consequential lie! Man can never do what Christ has done.

Truth Bearers Are the Only Hope for the Deceived

As Christian truth-bearers, we have been given an awesome responsibility and a divine privilege. We are to guard, proclaim, uphold and defend the truth against any and all opposition. In doing so, we must expose the lies that undermine the truth of God’s Word (1 Tim. 6:20-21). Deadly deception will continue to seduce and entrap people unless we stand firm and gird our loins with the truth (Eph. 6:14). We must proclaim the truth in love to those who have been deceived by religious indoctrination. It is not love when we allow unbelievers to march proudly towards hell’s gate without compassionately confronting them with the true Gospel. The more passionate we are for the truth, the less we will sanction sinful lifestyles, accept false religions, put up with errant teachings, and disobey the great commission. May our Lord be glorified as we testify to the truth just as He did!