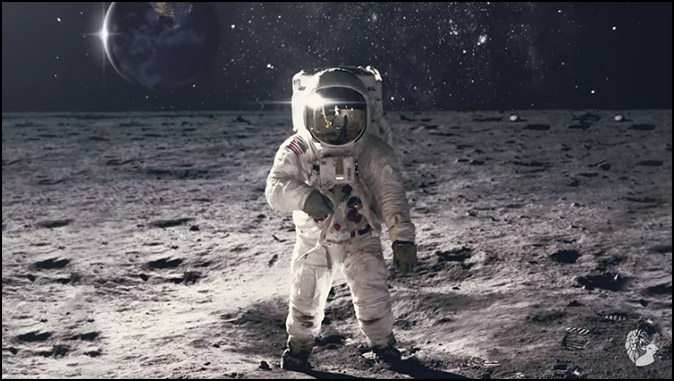 Tim Moore: I have admired Brigadier General Charlie Duke for many years now. General Duke is known by most of the world as an astronaut in the Apollo space program. He was also the voice of Mission Control when Apollo 11 landed on the moon in the summer of 1969. He was the one Neil Armstrong reported, “Tranquility base down.” Charlie responded: “Well, we are about to turn blue. Thanks a lot, we can breathe again.”

Not only have you likely heard his voice before, but he walked on the moon himself and was the tenth man to do so. I just can’t imagine how thrilling that experience must have been, not just being a part of the Apollo program, but then getting to walk on the moon yourself.

Charlie, what was it like being shot into space on a Saturn 5 rocket? I believe it was the largest rocket ever launched by the United States. What a tremendously powerful vehicle! What was it like riding that rocket up into space?

Charlie Duke: It was indeed the biggest launch so far. The newest series of space launch systems are going to end up bigger than the Saturn, but right now we still hold the record for the largest rocket. It was 363 feet tall. It’s rather like sitting atop a very limber fishing pole. The rocket doesn’t look limber, but it vibrates because the engines at the bottom of this aluminum structure cause such a great vibration. Its engines move to control our trajectory, and so it just shakes like crazy from side to side.

Interestingly, though, from inside the rocket, it’s not noisy. You are in your suit. You’ve got a helmet on and you can hear the oxygen hissing. You have your communications cap on. And so, you don’t hear anything outside. Only the people outside get to hear all of that noise.

And so, the rocket shook for the first 2 minutes and 40 seconds until the first stage burned out, but then after that, it flew really smoothly.

Walking on the Moon

Tim Moore: General Duke, at the time you were going to the moon, you were not a professing, born-again Christian, were you? You experienced the moon in all of its magnificence and its austere beauty, but you didn’t yet know Jesus as your Savior. And so, tell us a little bit about your experience walking on the moon and if that experience helped you find Jesus.

Charlie Duke: Well, we were so excited when we landed. We were six hours late, so when we climbed out of the lander the first time, I was like a little boy at Christmas. “I’m on the moon! I’m on the moon!” I kept thinking.

Next, we recognized the landmarks that we were going to explore. To the south was Stone Mountain and to the north was Smoky Mountain. Out directly west of us was just a rolling terrain mostly grey in color, but with some black and whites, though generally just shades of grey. We felt right at home. We were in an area where you recognize these various features, and so you felt like you belonged there, though it was a very hostile environment to human life. You had to be careful. Fortunately, we had very strong suits. Even if we fell down in our space suits and could get up without killing ourselves, they didn’t rip.

I was just overcome with the beauty of it all. Buzz Aldrin calls it “magnificent desolation,” and it really was.

Tim Moore: You did three EVA’s, or Extravehicular Activities, walks on the moon, then you were supposed to come back and rest. Could you actually go to sleep with all of that excitement and adrenaline?

Charlie Duke: The first sleep period we had was within five hours after we’d landed on the moon. We changed the flight plan so we had to go to sleep first. Unfortunately, during that first rest period, I was wide awake. I finally took a sleeping pill and got about four hours of sleep, three maybe. The later two walks we took outside lasted eight hours in our space suits and it’s very hard work moving around. You are moving around in this big suit and trying to make it work for you, which leaves you exhausted. Once we got back inside, we took off our suits, strung our hammocks, and we climbed into them, and fell right to sleep.

Tim Moore: It wasn’t until 1978 that you became a follower of Jesus Christ. Please tell us how that changed your life and how it put into perspective all of your accomplishments as an Apollo astronaut.

Charlie Duke: Well, knowing Jesus certainly did have a dynamic effect on my life. It healed my marriage. It healed my family. I was a military instructor dad and so was very focused on making my kids just as “perfect” as I was, which caused a lot of other problems in our relationships. But, as I read the Scriptures, I learned what God wanted me to be as a husband and father. The Bible speaks about all of these important relationships. I began to repent and ask God to forgive me. I asked Him to lead me and guide me. A feeling of peace came into my life and it’s still been here since 1978.

Thanks to Jesus, things just changed in my life. I began to see the world differently. I began to see it as God’s Creation. He’s everywhere! God never leaves us; He is always with us. He is always there to help. Jesus grants His followers a life of peace. Not that we don’t have troubles, but it is the peace of God that passes all understanding that we can call on when these troubles and trials hit us.

Tim Moore: That reminds me of Psalm 139, when King David as the psalmist asked in verse 7: “Where can I go from our Spirit? Or where can I flee from your presence? If I ascend to Heaven you are there, if I make my bed in Sheol behold you are there. If I take the winds of the dawn and dwell in the remotest part of the sea, even there your hand will lead me, your right hand will lay hold of me.”

Charlie, you are a man who has traveled to the far reaches of the heavens, going as far as mankind has ever gone before — to the moon! And yet, you can testify that God was there. Through all of those various experiences, as a follower of Jesus Christ, did you see God weaving them together to bring about His glory?

Charlie Duke: Yes, walking on the moon opened countless doors for me to testify about the goodness, the grace, and the love of God all over the world. There is not a tongue, nor a language, nor a place that God is not interested in reaching out and touching. So, my moonwalk, from presidents to people who live in dirt huts, they all want a good look at you and to tell them what it was like, and that gives me chances to witness the goodness of God.

Tim Moore: Amen! For those who are young and wonder if we as a declining society will ever see our nation reach these kinds of achievements ever again, what advice would you give them?

Charlie Duke: We are all unique creations. I have a twin brother, but he is not me. We don’t have the same DNA, but we look alike. So, God has made each one of us — each human being — exactly according to His design and purpose. Once we get our lives in line with what God wants us to do and what He wants us to be, we then experience peace, direction, and a purpose in our life that cannot come any other way.

As Christians, when we travel around we share our story — our testimony: “Let me tell you what God did in my life. I’ve got peace and purpose and direction when I listen to His voice. In everything and everywhere, I try to be right on track with Jesus Christ.

Tim Moore: Amen! And so, regardless of whether you are an astronaut who has been to the moon, or have never left your corner of the world, your testimony bears truth. In telling people about the Good News of Jesus Christ, we can all fulfill the purpose of why God has created us.

General Duke, thank you for your living testimony and for your love of the Lord Jesus Christ!

The Gospel: A Plan or a Man?

The Gospel: A Plan or a Man? By Dr. David Reagan I was born into…

The Gospel Unwavering By Tim Moore What inspires you? Amidst all the noise and clamor,…