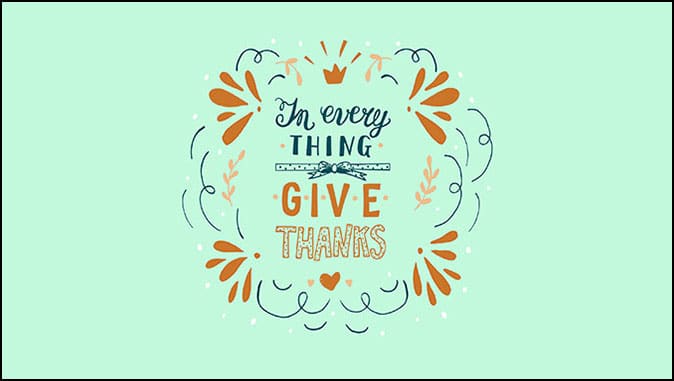 What Are You Thankful For?
By Nathele Graham

There are so many things to be thankful for. God gives us so much, but sometimes we misplace our values. Instead of humbly being thankful for the breath in our lungs and the food on the table, we thank Him for things that we shouldn’t take pride in. Our Lord knows the difference between true thankfulness and self-righteousness pride. Jesus taught many lessons through parables. In that way, His point was made but only those with ears to hear could understand the hidden truth. One day, He had some truth to teach regarding thankfulness. “And he spake this parable unto certain which trusted in themselves that they were righteous, and despised others:” Luke 18:9. Jesus pointed this lesson to self-righteous people who had little regard for others. Was He speaking to you? Maybe not entirely, but this parable does have a lesson for all of us.

“Two men went up into the temple to pray; the one a Pharisee, and the other a publican.” Luke 18:10. These two men were socially complete opposites. Scripture tells us much about Pharisees, and very little is good. For the most part, they were very religious. They knew the Law inside and out…and all the loopholes. They were also very proud of their perceived perfection, and tended to look down upon anybody who wasn’t part of their inner circle. The other man in this parable was just the opposite. He was a publican…a tax collector. This class of people were detested by most people. They were Jewish by birth, but had “sold out” to the Romans. One of the perks of their job was collecting more than the amount of the tax and keeping the difference. You might remember Zacchaeus who, according to Luke 19:2 was chief among the publicans and rich. He saw Jesus coming his way and was excited. Zacchaeus was “little of stature” so he climbed a sycamore tree to see Jesus as He passed by. Long story short, Jesus chose to visit Zacchaeus at his house and that encounter totally changed this publican. “And Zacchaeus stood, and said unto the Lord; Behold, Lord, the half of my goods I give to the poor; and if I have taken any thing from any man by false accusation, I restore him fourfold.” Luke 19:8. Zacchaeus turned his life around. Anyone who has truly encountered Jesus is changed.

Back to the parable. The Pharisee’s prayer is highlighted first. He was full of gratitude, but was he thankful for the right things? “The Pharisee stood and prayed thus with himself, God, I thank thee, that I am not as other men are, extortioners, unjust, adulterers, or even as this publican.” Luke 18:11. The Pharisee was thankful, but do you think God was pleased by his prayer? We need to thank God for all that He gives us, but the Pharisee in this parable had a heart problem. He was filled with pride. He was thankful that he was better than others. In his opinion, God had made him better than “…extortioners, unjust, adulterers, or even as this publican”. Then, the Pharisee went on to remind God of just how good he was. “I fast twice in the week, I give tithes of all that I possess.” Luke 18:12. Those are nice things to do, but they were done for the wrong reasons. They weren’t done to glorify God, but they were done to prove how superior the Pharisee was than others. Good works cannot bring salvation, but should be a result of true faith. They should be done to honor God and not to honor yourself.

The publican also prayed. “And the publican, standing afar off, would not lift up so much as his eyes unto heaven, but smote upon his breast, saying, God be merciful to me a sinner.” Luke 18:13. The prayer was simple, but it pleased God much more than the prayer of the Pharisee. The publican was humble. Instead of being sure he was in the spotlight where everyone could see him pray, this humble publican stood quietly off to the side. There, he fellowshipped with God asking for mercy because of his sins. This man recognized that God alone is to be exalted.

Jesus compared these two men and their attitude towards God. “I tell you, this man went down to his house justified rather than the other: for everyone that exalteth himself shall be abased; and he that humbleth himself shall be exalted.” Luke 18:14. God notices the intent of our heart when we pray. Prayer is a time of communicating with God. It’s Him who is to be exalted and praised. The Pharisee only saw God’s blessings in his life as something that made him better than others. His riches were, in fact, his god. What if his circumstances changed? If he lost his fortune and his status among the people, he would have nothing because he wasn’t thankful for true blessings. He saw these material things as lifting him above other people, such as publicans. Would the Pharisee still go the Temple and pray his arrogant prayers if he was poor? On the other hand, the publican was humble and recognized that he was a sinner. He had no false god in his life and humbled himself before the one true God.

A few Pharisees did earnestly seek God. Nicodemus was one of them. Historic records say that he was quite rich, but Scripture discloses that he was also a man who wanted to know truth. He turned to Jesus to find truth. “There was a man of the Pharisees, named Nicodemus, a ruler of the Jews: the same came to Jesus by night, and said unto him, Rabbi, we know that thou art a teacher come from God: for no man can do these miracles that thou doest, except God be with him.” John 3:1-2. This Pharisee was very different than the one in Jesus’ parable, in that he was humble in seeking God. Scripture also records that it was Nicodemus, along with Joseph of Arimathaea (a rich member of the Sanhedrin), who took Jesus’ body from the cross and placed it in the tomb. These two men humbly put Jesus above their wealth. They were more blessed than the Pharisee who thought himself better than other people. They had truly found blessings through faith, not through riches or social standing.

What about publicans? Scripture tells us of one who chose to leave his wicked ways behind to follow Jesus. “And as Jesus passed forth from thence, he saw a man, named Matthew, sitting at the receipt of custom: and he saith unto him, Follow me. And he arose, and followed him.” Matthew 9:9. As noted before, publicans weren’t respected among the people at all. Tax collectors were considered traitors because they were Jewish men who worked for the Roman government to collect unfair taxes from their fellow countrymen. Any money they collected above the required tax was money in their own pockets Yet, when Jesus called Matthew there was no wavering. Matthew immediately left his dishonest profession and followed Jesus. He gave up worldly riches for eternal blessings. When a person sees the sin in their life and turns to Jesus, He will welcome that person no matter what the past sins are. Like Matthew, forgiven sinners must leave their sin and follow Jesus.

Religion cannot bring salvation, and if you’ve put your faith in rites and rituals you’ve rejected grace through faith offered by Jesus at the cross. “For by grace are ye saved through faith; and that not of yourselves: it is the gift of God: not of works, lest any man should boast.” Ephesians 2:8-9. Although it’s difficult for a religious Pharisee, Catholic priest, or any sinner who sees fault in others but not themselves to humbly put God above status and riches, even they can find salvation in Christ. Jesus Christ was not religious and the rites seen in many so-called Christian congregations are not Scriptural. Only humble faith in the death, burial, and resurrection of Jesus Christ will bring salvation. The Apostle Paul is a good example of that. He had been a Pharisee who knew the Letter of the Law and wanted to force every Jewish-born man and woman to bow before the letter of the Law. Then he met Jesus. His life and attitude were totally changed by that encounter. He learned to be thankful to God no matter what came his way. “And whatsoever ye do in word or deed, do all in the name of the Lord Jesus, giving thanks to God and the Father by him.” Colossians 3:17. His encounter with Jesus changed the way he saw life Instead of stoning people who disagreed with him, he understood that only things done for Christ mattered. No matter if he was in prison because of his faith or shipwrecked on an island, he was thankful to God. “In every thing give thanks: for this is the will of God in Christ Jesus concerning you.” 1 Thessalonians 5:18. That’s a good lesson for all of us. Too often we thank God for our comforts and status, but forget to thank God in the bad times too. Even a Pharisee learned that lesson.

Is your gratitude like the Pharisee grounded in pride and arrogance? Or are you humbly thankful for what God provides, like the publican? I’m thankful that God has blessed me richly and I recognize the blessings are from Him. I’m thankful that my feet were set firmly on a Christian foundation when I was very young. I’m thankful that God gave me a wonderful husband who drew me closer to God and that my three grown children all know Jesus as their Saviour. I’m thankful my bills get paid each month, and that there is food on my table. Mostly, I’m thankful for salvation through Jesus Christ and want to share that blessing with others. “Blessed be the God and Father of our Lord Jesus Christ, who hath blessed us with all spiritual blessings in heavenly places in Christ: according as he hath chosen us in him before the foundation of the world, that we should be holy and without blame before him in love: having predestinated us unto the adoption of children by Jesus Christ to himself, according to the good pleasure of his will, to the praise of the glory of his grace, wherein he hath made us accepted in the beloved. In whom we have redemption through his blood, the forgiveness of sins, according to the riches of his grace:” Ephesians 1:3-7. That blessing is above all other blessings.

What are you thankful for? Pharisee and publican alike can find salvation through Jesus Christ. One isn’t superior to the other, but all are sinners saved by grace. That’s what we all need to be thankful for.

Why Study Prophecy? By Nathele Graham It takes study to understand prophecy. To gain some…

The Standard of Measure

The Standard of Measure By Nathele Graham Measuring things has always been important. Through the…

My Faith Looks Up to Thee

My Faith Looks Up to Thee By Nathele Graham I’ve always loved hymns. When I…