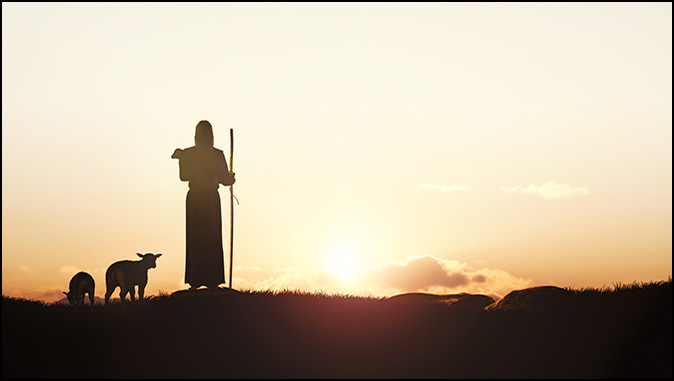 Psalm 23 is probably the most beloved Psalm in Scripture. It was written by King David who knew the responsibilities of a shepherd well. David must have been a very tenderhearted person, but fierce in the protection of his flock. He killed a bear and a lion that had threatened his flock, as God was training him to be king. After that he faced the giant, Goliath with confidence as Saul’s army cowered in the hills. David’s confidence came from his solid knowledge that God was with him. How different a professing Christian’s walk would be if we had the confidence that David had. Too often we cower in fear like Saul’s army instead of walking in the footsteps of Jesus with confidence. Maybe we cower because we haven’t truly placed our faith in Christ.

God has always taken care of His children. When the Israelites were freed from slavery in Egypt, He parted the Red Sea so they could safely pass as if it was dry land, He provided mana when they were hungry, and He gave them water when they were thirsty. Like a shepherd, God always looked out for their well-being. Sadly, those belly-aching people never learned to trust Him, and their poor choice caused them to wander for 40 years. Still, God watched out for them. He protected them through battles and led them in their wanderings. Jesus is our Good Shepherd, and He will lead us in our Christian walk if we trust Him.

Jesus did give His life for His sheep. We can trust Him and follow Him with confidence.

“He maketh me to lie down in green pastures: he leadeth me beside the still waters.” – Psalm 23:2.

David’s early life was spent tending to a flock of sheep. He understood how important food and water were for healthy sheep. No shepherd would be foolish enough to find barren fields and stagnant water for the flock. Rebellious sheep just might stray into pastures which only held dead grass and stagnant water, but the shepherd would look for them and bring them back into the fold. Again, we see Jesus as our Shepherd who loves us.

“How think ye? If a man have an hundred sheep, and one of them be gone astray, doth he not leave the ninety and nine, and goeth into the mountains, and seeketh that which is gone astray? And if so be that he find it, verily I say unto you, he rejoiceth more of that sheep, than of the ninety and nine which went not astray.” – Matthew 18:12-13.

Jesus is our Good Shepherd, and He cares for each member of His flock. If someone decides to wander into the places where sin reigns, Jesus will seek the lost and bring that sheep back to the green pastures and the still waters.

“He restoreth my soul: he leadeth me in the paths of righteousness for his name’s sake.” – Psalm 23:3.

David knew his Lord very well. He knew that by following God’s word he would never go astray, but would follow the paths of righteousness. Was David perfect in following the Lord? No, he wasn’t. He strayed big time. He committed adultery with Bathsheba, she became pregnant, so to cover his sin, David made sure her husband, a faithful soldier, was put in a position to be killed. Does that sound as if he was following the path of righteousness? It’s more like he was following the way of the world that leads to destruction. Nathan, the prophet, bravely confronted David about his sin, and David saw his own guilt. His heart was broken and he earnestly went to the Lord in prayer to seek forgiveness.

“[[To the chief Musician, A psalm of David, when Nathan the prophet came unto him, after he had gone in to Bathsheba.]] Have mercy upon me, O God, according to thy lovingkindness: according unto the multitude of thy tender mercies blot out my transgressions.” – Psalm 51:1.

David knew of the mercy of God, but also knew that his sin was worthy of death. He was brokenhearted and turned to God in humble and true repentance.

“Create in me a clean heart, O God; and renew a right spirit within me. Cast me not away from thy presence; and take not thy holy spirit from me. Restore unto me the joy of thy salvation; and uphold me with thy free spirit.” – Psalm 51:10-12.

As Christians, we are sealed with God’s Holy Spirit, but we should be no less repentant of the sin we commit. As long as we live on this side of Heaven we will struggle against sin. It’s easy to see the sin in other people, but much harder to see our own sin.

David could have pointed to Bathsheba’s sin, but knew he had to repent of his own sin. David found forgiveness.

“Yea, though I walk through the valley of the shadow of death, I will fear no evil: for thou art with me; thy rod and thy staff they comfort me.” – Psalm 23:4.

In the middle of a peaceful bit of poetry and song, we read of a very eerie place. “The valley of the shadow of death”. In fact, it almost seems as if it doesn’t belong in this Psalm, which speaks about green pastures and still waters. In truth, we are all walking in this valley. If you’ve truly given your life to Christ and accepted Him for salvation, death holds no evil for you.

“So when this corruptible shall have put on incorruption, and this mortal shall have put on immortality, then shall be brought to pass the saying that is written, Death is swallowed up in victory. O death, where is thy sting? O grave where is thy victory? The sting of death is sin; and the strength of sin is the law. But thanks be to God, which giveth us the victory through our Lord Jesus Christ.” – 1 Corinthians 15:54-57.

Christians have nothing to fear in death. Be sure your profession of faith was real and not just words. Put your words into action, and serve Christ. Death is all around us, and we need to boldly confront those who reject Christ, and help them away from the valley of death. They are the walking dead. They may seem to be happy and have all that life has to offer, but unless they have come to a true faith in Christ, they are dead in their sins. You need to put on the whole armor of God and be fearless in the battle against evil.

“For we wrestle not against flesh and blood, but against principalities, against powers, against the rulers of the darkness of this world, against spiritual wickedness in high places.” Ephesians 6:12. We can trust Jesus to lead in the battle and to guide us each day “… in the paths of righteousness for his name’s sake” – Psalm 23:3b.

“Thou preparest a table before me in the presence of mine enemies: thou anointest my head with oil; my cup runneth over.” – Psalm 23:5.

Do you have an enemy? If you say no, then you’re not walking the path of righteousness. Satan is a formidable enemy and wants you to stray from you’re your walk with Christ. Jesus didn’t promise that life would continually be filled with green pastures and still waters, but said that because of your faith in Him you would have strife, even with your loved ones.

“Think not that I am come to send peace on earth: I came not to send peace, but a sword. For I am come to set a man at variance against his father, and the daughter against her mother, and the daughter in law against her mother in law. And a man’s foes shall be they of his own household. He that loveth father or mother more than me is not worthy of me: and he that loveth son or daughter more than me is not worthy of me.” – Matthew 10:34-37.

Jesus doesn’t mean that to follow Him we must fight against family and friends. He meant that He must be first in our hearts. If you’ve chosen to follow Him, you may meet with resistance from people you love who haven’t placed their faith in Him. Even if it brings division, He will provide for you. Don’t be shy about your faith, but speak and act in boldness as lead by the Holy Spirit.

“Surely goodness and mercy shall follow me all the days of my life: and I will dwell in the house of the LORD for ever.” – Psalm 23:6.

David was very sure of his Shepherd. He knew that God’s goodness and mercy are real and for all time. Upon death, David was assured that he would dwell with the LORD forever. We see other people described in the Old Testament who held that same belief. Job was described as a pretty good guy.

“There was a man in the land of Uz, whose name was Job; and that man was perfect and upright, and one that feared God, and eschewed evil.” – Job 1:1.

Nevertheless, he faced many challenges. His children died, his wealth was taken away, his health was attacked, and “friends” pointed out that he deserved the troubles. Job came through his disease and loss with a stronger faith.

“For I know that my redeemer liveth, and that he shall stand at the latter day upon the earth: and though after my skin worms destroy this body, yet in my flesh shall I see God: whom I shall see for myself, and mine eyes shall behold, and not another; though my reins be consumed within me.” – Job 19:25-27.

These are strong words from a man who lived many, many centuries before the Redeemer was even born in Bethlehem.

There’s no disadvantage to being led by the Lord. We are given all we need. If we learn to thank God for what He provides, we will find that what the Lord gives is really all we want.

Today we can rejoice in our Lord and Saviour. He is our Good Shepherd who leads us in the paths of righteousness. He leads and we need to follow. If you claim to be a Christian, let that profession of faith change you. Trust in the Good Shepherd and He will never fail.

“Now the God of peace, that brought again from the dead our Lord Jesus, that great shepherd of the sheep, through the blood of the everlasting covenant, make you perfect in every good work to do his will, working in you that which is wellpleasing in his sight, through Jesus Christ; to whom be glory for ever and ever. Amen.” – Hebrews 13:20-21.

He is my Shepherd and I shall not want…even when walking through this valley of the shadow of death.