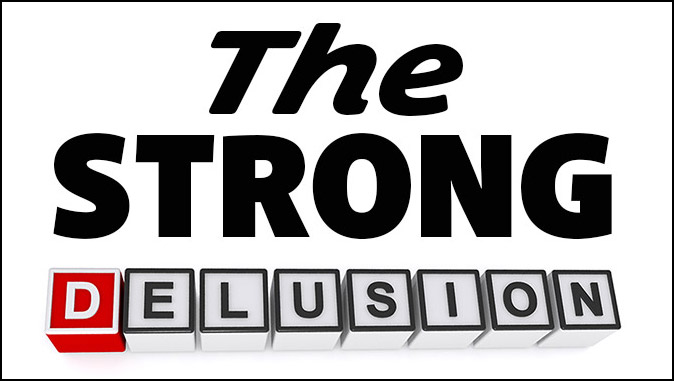 The Strong Delusion
By Nathele Graham

It’s coming. Whether you believe in the Harpazō or not, you will be affected by it. If you’ve accepted Christ for salvation, then you will be taken to Heaven to be with Jesus. However, if you’ve rejected Christ’s offer of salvation, you will face God’s wrath. Scripture is clear about the Rapture/Harpazō, but many who call themselves Christians haven’t a clue what it is. I’m sorry to say, that pastors seldom teach about it, and the congregation sleeps in the pews never opening their Bibles to read, let alone study, God’s word. The Rapture is our blessed hope. It’s a promise that those of us who have placed our faith in Jesus, won’t face God’s wrath and judgment during the final seven years of history on earth. There is much written in Scripture about the Rapture, but there are various interpretations and it can get confusing.

“Knowing this first, that no prophecy of the scripture is of any private interpretation. For the prophecy came not in old time by the will of man: but holy men of God spake as they were moved by the Holy Ghost.” – 2 Peter 1:20-21.

It’s always best to just believe what God says and not listen to man’s ideas. Some pastors teach that there won’t be a Rapture. These same preachers are most likely in error on other clear Biblical truths. Most likely they believe in Replacement Theology, which is the false belief that Christians have replace the Jewish people in God’s heart. We haven’t replaced them: we have our own special place, and they have their special place. Then there is the ridiculous idea that Christians have to go through the Great Tribulation so that the we can be purified. Really? That’s what Christ did for us. No human is sinless, and only the sinless blood of God can take our sin away. Jesus was conceived by the Holy Spirit, and therefore fully God. He was also fully human, because His mother, Mary, was human.

When the Apostle Paul was in Thessalonica, he taught them deep truth in a very short time. He was there three weeks and not only taught them the truth of the Gospel, but taught them about the Rapture. He also established a congregation there that was truly saved. They remembered his teaching about the Rapture, but they also saw tremendous persecution happening all around them. The Christians there forgot what had been taught to them and were concerned that they had missed the Rapture. Paul assured them they hadn’t missed it, then went on to explain the order of events. The Rapture is a fact.

“Now we beseech you, brethren by the coming of our Lord Jesus Christ, and by our gathering together unto him, that ye be not soon shaken in mind, or be troubled neither by spirit, nor by word, nor by letter as from us, as that the day of Christ is at hand.” – 2 Thessalonians 2:1-2.

Today, there are more and more people, even pastors, who deny the truth of the Rapture, or else place it out of order when teaching on the end times. Christ will come for us before the events of the final seven years, and before the Antichrist is revealed.

“Let no man deceive you by any means: for that day shall not come, except there come a falling away first, and that man of sin be revealed, the son of perdition;” – 2 Thessalonians 2:3.

The Greek word “apostasia” is translated “falling away” and there is debate over what Paul meant. Did he mean there would be many people believe false doctrine, or did he mean there would be a departure? This could actually mean both. There are many, many false doctrines being taught and according to Paul’s letters to Timothy, this is a sign of the times. Pastors go to seminary and learn to question God’s truth, then come up with their own interpretation of Scripture, write books, and lead thousands upon thousands of people astray. Paul could have also meant that the man of sin cannot be revealed as long as Christians are on earth. The Holy Spirit resides in us and restrains the totally evil man to be able to come into power. As Christians become more worldly, it’s easier for Satan to work his evil, and all things are falling into place for the Rapture first, then the seven years of tribulation.

No matter what exactly Paul had in mind, there are many signs that the Rapture is drawing near. Things are getting unbelievably wicked in the world and Christians are going along with the worldly ways that lead to destruction. Shame on us for not standing firm on God’s truth. The Apostle John wrote that we need to test spirits.

“And every spirit that confesseth not that Jesus Christ is come in the flesh is not of God: and this is that spirit of antichrist, whereof ye have heard that it should come; and even now already is it in the world” – 1 John 4:3.

Brothers and sisters, study Scripture and prepare yourself to discern God’s truth from Satan’s lies. Then stand firm on the solid foundation of God’s truth.

“For the mystery of iniquity doth already work: only he who now letteth will let, until he be taken out of the way. And then shall that Wicked be revealed, whom the Lord shall consume with the spirit of his mouth, and shall destroy with the brightness of his coming; even him, whose coming is after the working of Satan with all power and signs and lying wonders, and with all deceivableness of unrighteousness in them that perish; because they received not the love of the truth, that they might be saved.” – 2 Thessalonians 2:7-10.

John had written that the “spirit of antichrist” was already in the world, and Paul said that the only thing that holds this evil in check is the Holy Spirit. Only God can restrain Satan. When Christians are Raptured, the man of sin will have a free rein to deceive all who are left behind. The Holy Spirit will continue His work to draw the unsaved and reveal God’s truth to all who are left behind, but you’d be wise to listen to Him now. Satan is a liar and is able to deceive anyone who has rejected God’s truth. When Jesus walked this earth, He did many miracles. He healed lepers, gave sight to the blind, fed thousands with a few fish and some bread, and many more wonderous signs. These were true miracles, but Satan has some power, too. Nothing like the power of God, but he will empower the man of sin to work “signs and lying wonders”. He will deceive the people left here. Jesus talked about this.

If you don’t have the love of God in you, then you are open to the deceptive lies of Satan and the antichrist.

God has done everything He can to bring everyone to salvation. He entered His creation and willingly allowed Himself to be crucified…the final sacrifice for our sin. He gave us Scripture and there have been many Christians who share their faith. The Truth is available to anyone who seeks it. Unfortunately, many have rejected the truth. They will be left on earth to face the horrors of the Great Tribulation.

“And for this cause God shall send them strong delusion, that they should believe a lie: that they all might be damned who believed not the truth, but had pleasure in unrighteousness.” – 2 Thessalonians 2:11-12.

What’s the lie? There are many ideas about this. Some say that the lie is that UFOs are good and benevolent beings from a distant star system. They have come to help humanity to live better. That is certainly a lie. As we draw nearer to the end of time, and Christians aren’t standing strong in their faith, we hear more about UFO sightings and many people claim to have been abducted. These reports are too numerous to ignore and are something that Satan would do in order to bring fear and confusion. Could the lie be that men think they are really women, and women think they are men? In his letter to the Romans, Paul goes into great detail about what happens when God is rejected as the Creator. A belief in the lie of evolution leads to sexual depravity. Jesus said that it would be incredibly wicked at the end.

If you study what was happening during Noah’s time and Lot’s time, you will see very similar things that are happening today. You have to study Scripture. Most pastors don’t touch on this subject at all, and therefore many Christians haven’t any idea of what’s happening in the world around us.

Another delusion that will be strong is that the Antichrist is actually Jesus and worthy of worship.

This, of course, happens after the Rapture. Christians will be in Heaven with Jesus, but the Antichrist will be alive and well, deceiving those left behind and causing everyone to take his mark. When a person takes the mark of the beast, they can no longer be saved. The world is being prepared for the end times, so be very careful what you allow into your body.

God has given us all the information we need in order to avoid being deceived. We all have a choice. If you study Scripture…really study and not just read it or believe everything the preacher says…you might find that you are believing things that God doesn’t say in Scripture. It’s easier to be deceived if you don’t have facts.

“These were more noble than those in Thessalonica, in that they received the word with all readiness of mind, and searched the scriptures daily, whether those things were so.” – Acts 17:11.

Don’t be deceived or fall for any of Satan’s lies.