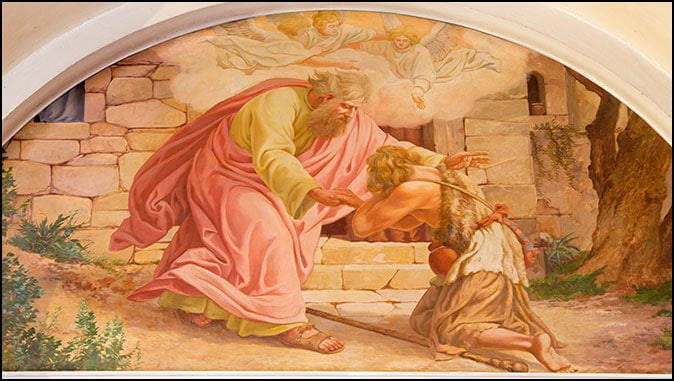 The Prodigal’s Father
By Nathele Graham

The parable of the prodigal son holds many lessons. One is a lesson in choices. “And he said, A certain man had two sons: and the younger of them said to his father, Father, give me the portion of goods that falleth to me. And he divided unto them his living.” Luke 15:11-12. The younger son thought he had life pretty rough. He lived in his father’s house and under his father’s rules. Most of us don’t like rules. They restrict us and don’t allow us the freedom to be all our fallen human nature wants to be, which usually involves a prodigal lifestyle. A “prodigal” is someone who lives in a reckless and extravagant way. The young son decided he wanted a taste of the prodigal life, so he told his father he wanted his inheritance right then. Now, the father had a choice. A hard choice. The rules were there to protect the ones he loved, just as God’s rules are there to protect us from the wages of living a sinful life. “For the wages of sin is death; but the gift of God is eternal life through Jesus Christ our Lord.” Romans 6:23. Much heartache comes from going against God’s rules, and if you die without Christ then death is eternal. Shattered lives result from rebelling against God’s rules. Separation from loved ones, wallowing in the pig pen of life, and unhappiness all come from going against God. That lifestyle might be disguised by a mansion and jet set living, but without God it’s still a pig pen. The prodigal’s father could have forced his beloved son to stay home, but his love for his son allowed the father to give his son freedom to choose whether to honor his father or rebel. The son made his choice and had to be responsible for the results. God could have forced humans to follow His rules, but that isn’t love. So, God allows us to make the choice whether to follow Him or disobey His rules. His love is perfect love, and our obedience to Him is evidence of our love for Him

The father in the parable deeply loved this rebellious son, and his love showed in allowing that prodigal son to find out for himself just how tough the world can be. His beloved son would live or die by his own choice. In his father’s house he knew true love and he didn’t worry about food or clothing because his father provided for him. In the world it was a different way of life He spent his inheritance on “…riotous living.” Luke 15:13b. He sewed his wild oats, but when the money was gone, so were the “friends”. Whatever pleasure his money bought disappeared and he found out he had no real friends and no more protection. “The love of money is the root of all evil: which while some coveted after, they have erred from the faith, and pierced themselves through with many sorrows.” 1 Timothy 6:10. Notice, it isn’t money that’s evil, but the love of it. The young man not only had spent his money and had no friends, but a famine hit. He had to find a job (there was no welfare back then and people were expected to work). Jobs weren’t easy to come by, but he did find one. “And he went and joined himself to a citizen of that country; and he sent him into his fields to feed swine.” Luke 15:15. This was about as low as a Jewish man could sink. It’s easy to criticize that young man, but when we point an accusing finger at someone, we have 3 fingers pointing back at us. Are you living by God’s rules, or are you rebelliously living by your own rules and falling into your own pigpen? No good can come from turning away from God.

The prodigal’s father knew the dangers and never stopped loving his son. It must have broken his heart knowing his son had made such a bad choice, but this wise father knew that the son had to learn from his mistakes. If the father had forced the prodigal son to return home where it was safe, would the son have learned anything? Would he still be rebellious and looking for greener pastures? The son had to make the choice, not his father. I do wonder if the father had made bad choices in his own youth that taught him lessons. Was that how he understood that his son had to learn from experience? Eventually, that rebellious young man came to his senses. “And when he came to himself, he said, How many hired servants of my father’s have bread enough to spare, and I perish with hunger! I will arise and go to my father, and will say unto him, Father, I have sinned against heaven, and before thee, and am no more worthy to be called thy son: make me as one of thy hired servants.” Luke 15:17-19. Among other lessons he had learned the tough lesson of humility. We all need to learn that lesson. The prodigal also knew his father was a man who used his money wisely and unselfishly. He treated his servants kindly and took care of their needs.

The prodigal son, now a humble son, had no idea what kind of a reception awaited him, but he knew that a servant in his father’s house was better off than he was. The father’s reaction always brings a tear to my eye. “And he arose, and came to his father. But when he was yet a great way off, his father saw him, and had compassion, and ran, and fell on his neck, and kissed him.” Luke 15:20. What joy his father felt! He was watching and when he saw his son coming home his reaction is a lesson for us all. Human nature could have caused him to say “I told you so” or “I hope you learned your lesson”. Instead, the father ran to his son and his joy overflowed. He didn’t ask for explanations or make the son to beg for forgiveness, but kissed him and welcomed him home. Do you have a prodigal son or daughter in your life? How will you react when they come to their senses and return to you? You need to forgive, forget, and welcome them home with joy.

Another question is, are you a prodigal son or daughter? Maybe it’s time for you to return Home to the Father who loves you. We all have choices and all have been in the shoes of that prodigal son to one extent or another. We think the grass is greener elsewhere, but that’s not reality. God offers us pure love and protection, but most of us choose to rebel against His rules. Whatever your sin, God your Father is watching and waiting for you to come to your senses. Think about this, the prodigal son was a part of his father’s family, even in his rebellion, just as Christians are a part of God’s family. When we accept Christ for salvation, then rebelliously turn against Him, we have lost many rewards and protection, but we are still God’s child. When we humble ourselves and return to Him, He will forgive us. “Likewise, I say unto, there is joy in the presence of the angels of God over one sinner that repenteth.” Luke 15:10. God loved us enough to step into this fallen world to bring us the only way of salvation. “For God so loved the world that he gave his only begotten Son, that whosoever believeth in him should not perish, but have everlasting life. For God sent not his Son into the world to condemn the world; but that the world through him might be saved.” John 3: 16-17. Whether you have never come to Christ for salvation or if you have rebelled and walked away, there’s still forgiveness waiting. God’s rules have never changed, but after living in the pigpen of the world ruled by Satan, God’s rules aren’t so bad. They protect us from the satanic evil that rules the world. You need to realize your sin and ask forgiveness.

The prodigal son came home and found his father watching for him, but he also found resentment from his brother. “And he answering said to his father, Lo, these many years do I serve thee, neither transgressed I at any time thy commandment: and yet thou never gavest me a kid, that I might make merry with my friends: but as soon as this thy son was come, which hath devoured thy living with harlots, thou has killed for him the fatted calf.” Luke 15:29-30. Are you a Christian who lives a perfect life and serves Jesus without any failures? That’s a trick question because we all fail. Do you resent the forgiveness the Father has for prodigals who return to Him? The worst of sinners will find forgiveness through Jesus, including every Christian who stumbles. The Father welcomes all sinners home and forgets the sin. “If we confess our sins, he is faithful and just to forgive us our sins, and to cleanse us from all unrighteousness.” 1 John 1:9. You need to repent…truly repent. That means you change your mind about living in rebellion to God. If your repentance is sincere then, through the blood of Jesus Christ you are forgiven. Temptation to sin will continue to tug at your mind, but you need to resist the temptation. Just because God is willing to forgive doesn’t mean you can keep on sinning. Jesus told the prostitute who found forgiveness “…neither do I condemn thee: go, and sin no more.” John 8:11b. We need to choose to take up our cross, crucify the sin in our life to that cross, and follow Jesus.

Are you a prodigal? Were you raised in the love and safety of a Christian home, but thought the world offered more fun and excitement? Your father and mother are waiting for you to return home, but there’s a greater Father waiting for you. Take a look at your life and see how sin has bankrupted you. Repent and return to your Heavenly Father now. “Humble yourselves in the sight of the Lord, and he shall lift you up.” James 4:10. James understood humbling himself before the Lord. Many Bible scholars agree that he was the half-brother of Jesus (Mary was his mother but Joseph was his father). Scripture discloses that he, along with the other brothers, didn’t believe Jesus was the Messiah and mocked Him. Once James realized that Jesus was truly the Messiah, he humbled himself and gave his life to the Lord’s service. He called himself a servant of God and of the Lord Jesus Christ.

God is waiting and watching for your return. Humble yourself before Him now in repentance and give yourself to Him. Make your choice now because tomorrow may be too late. Prodigal living is deadly.

A Mighty Fortress By Nathele Graham “The LORD is my rock, and my fortress, and…

We Need God-Fearing Shepherds By Nathele Graham David knew his Shepherd, and wrote psalms of…