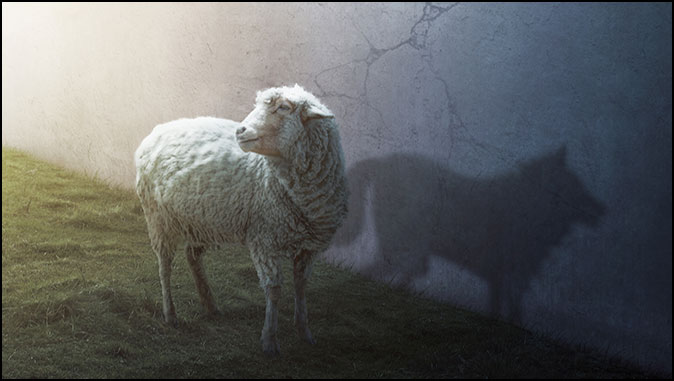 The End Times Are Here
By Nathele Graham

Too many Christians walk around with blinders on. They are being led by blind shepherds who follow the latest trend found in books that aren’t God-breathed. That leads to a malnourished flock. God spoke His words to men who honored Him and wrote those words as a guide. From Genesis through Revelation, God wrote it all. If we study and pay attention to the Holy Spirit’s guidance, we will be better able to understand things we read in Scripture, and why many pulpits are dead. Sadly, many Christians have little, if any, knowledge of Scripture. They trust pastors to speak God’s truth, but we are in the final days, and many pastors don’t preach the pure word of God. Ask a fellow Christian who won last night’s baseball game, and you’ll get an enthusiastic recount of the game. Ask that same person about their faith in God and you get an offhand answer like “I go to church”.

“Now the Spirit speaketh expressly, that in the latter times some shall depart from the faith, giving heed to seducing spirits, and doctrines of devils; speaking lies in hypocrisy; having their conscience seared with a hot iron; forbidding to marry, and commanding to abstain from meats, which God hath created to be received with thanksgiving of them which believe and know the truth.” – 1 Timothy 4:1-3.

Are you one who is more interested in secular happenings than in the all-important subject of eternity? If so, ask yourself if any celebrity or sport’s figure died for your salvation. The answer is simple. Only Jesus Christ, God incarnate, gave His life willingly for your salvation. Why, then, do you care more about this life than eternal life?

In the above passage, the Apostle Paul warned the young pastor, Timothy, about the “later days” He said that corruption of God’s truth will happen. Paul was correct. It was Timothy’s job in those early days to teach God’s pure truth. If Timothy and the other pastors in those early days had deviated from God’s Holy Spirit breathed truth, Christianity would have died long ago. We can see many “doctrines of devils” that have corrupted the faith. Many pastors allow and encourage yoga, contemplative prayer, and other non-Christian practices. It’s important to meditate upon God’s word, but that’s very different than Eastern meditation where you clear your mind and open yourself to be entered by a demon.

When you meditate upon God’s word, your mind isn’t emptied, but filled with God’s words. If you practice yoga or eastern meditation of any kind, you are in disobedience to God.

Another corruption that has happened over time is in the mission field. Missionary work has moved away from sharing the Gospel to a works-based welfare type of effort where you repair houses, plant crops, and give gifts hoping the lost will ask about Christ. If you want to be a missionary, study Paul’s method and stop being ashamed of the Gospel.

“For I am not ashamed of the gospel of Christ: for it is the power of God unto salvation to every one that believeth; to the Jew first, and also to the Greek.” – Romans 1:16.

Jesus told the story of the good Samaritan, but that wasn’t talking about spreading the Gospel. That was about doing what is right. Jesus said to preach the Gospel.

It’s always wise to listen to Jesus and obey. Good works have their place, but if that’s how you’re doing missionary work, then you need to get back to studying Scripture.

Today there are some religions, even ones that claim to be Christian, that forbid marriage by the clergy. Paul wrote that forbidding to marry is one of those doctrines inspired by the devil. Marriage is a very sacred covenant between a man and a woman and was first instituted by God in the Garden of Eden. Why, then, is marriage forbidden in some denominations? Marriage between a man and a woman was established in the Garden of Eden, and is a picture of Christ and the ekklesia (His church). Paul does mention in His first letter to the Corinthians that it isn’t wrong not to marry.

“I say therefore to the unmarried and widows, it is good for them if they abide even as I. But if they cannot contain, let them marry: for it is better to marry than to burn.” – 1 Corinthians 7:8-9.

Paul had chosen not to be married and found it was easier to serve Christ. But we know that Peter was married, also Priscilla and Aquilla were husband and wife. Singleness needs to be ordained by God, not forced upon a person in order to be a leader in a denomination.

Through the centuries since Paul wrote to Timothy, human thoughts have slipped in and much of the ekklesia won’t tolerate sound doctrine. Doctrines of demons are very evident today. In order to keep the collection plates full, the pastor has no problem teaching doctrines that are inspired by devils. Those sermons might be nice and tickle the ears, but they have no place being preached from a pulpit. I saw a video once that talked about “The Christ Conscience” (a doctrine straight from Satan’s mouth). One person loved attending services on Sunday because she could just relax and be made to feel good about herself. It’s good to know that Jesus loves you, and that He died for your sin, but you have to understand that you are a sinner saved by grace.

Unless you recognize the sin in your life you will never turn from it. You won’t grow in grace and wisdom. The time has come when people won’t put up with sound doctrine. Many pastors preach New Age, prosperity Gospel, replacement theology, all faiths lead to Heaven, purpose driven lies, etc. These are all doctrines of demons.

Many will depart from the faith and we see that happening today. Some public Christians have hardened their hearts and publicly departed from the faith…denying Christ who shed His blood. The real question is, did they ever sincerely accept Christ in the first place. Have you? Would you rather hear jokes from the pulpit and a feel-good Gospel rather than be fed meat from Scripture to help you grow? You can’t blame others for your lack of Scriptural understanding. With prayer and guidance by the Holy Spirit you will be led into understanding.

“Study to shew thyself approved unto God, a workman that needeth not to be ashamed, rightly dividing the word of truth. But shun profane and vain babblings: for they will increase unto more ungodliness.” – 2 Timothy 2:15-16.

Keeping Christ outside and apart from the congregation and is a sign that the Rapture is very close.

That was written in the last letter which Jesus dictated to the Apostle John. It describes how congregations will be, just before the Rapture. You need to answer Christ’s knock on the door of your heart before it’s too late.

The end times are here and we are in the latter days of which Paul wrote about. Don’t be deceived. Study Scripture for yourself. It’s much more interesting than any form of entertainment you might indulge in. It’s straight from the heart of God.