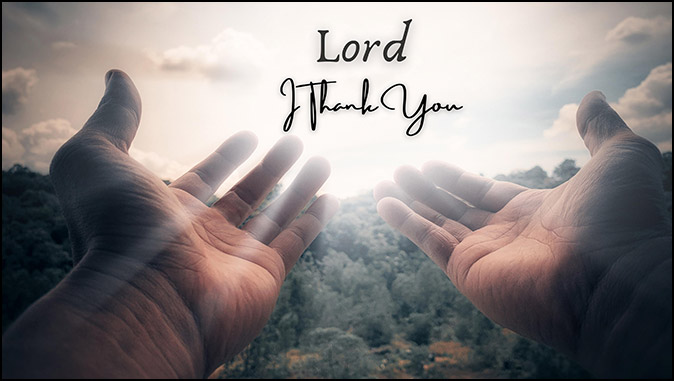 Thank You, God, For Everything
By Nathele Graham

“Every good gift and every perfect gift is from above and cometh down from the Father of lights, with whom is no variableness, neither shadow of turning.” – James 1:17.

In the United States, we set aside one day each year and call it “Thanksgiving”. We all have different ways of celebrating that day. Traditionally, families come together and eat way too much food. The traditional meal consists of turkey, dressing, mashed potatoes, gravy, cranberry sauce, yams, pumpkin pie, and more. When I was young, my family would gather at my grandparent’s house, and we had a feast. There were leftovers for the following week, and the highlight was turkey soup. As a child, I took this all for granted and didn’t understand how much I had to thank God for, so I didn’t thank God for all He provided. Today, I wonder why people, who don’t know God, celebrate a day of thanksgiving Who are they thankful to? Then I think of all that Christians take for granted, and wonder why we aren’t more thankful to God every day, rather than just one day a year.

“Be careful for nothing; but in every thing by prayer and supplication with thanksgiving let your requests be made known unto God.” – Philippians 4:6.

Always be thankful to God.

Paul had been in prison in Philippi; he had suffered much in that city. Paul and Silas had been in prayer when a young woman, who was possessed with a spirit of divination, began harassing them. She was used by some men who made money from her ungodly ability. So, when Paul cast out that demon, her “handlers” were angry and he had them arrested for practicing their faith openly. They were beaten and thrown into prison where they were shackled. They didn’t get mad at God, but sang His praises.

This is an example of being thankful in everything, but not necessarily for everything. In every situation be thankful. Their example of faith was heard by all of the prisoners and was instrumental in the jailer coming to salvation. There was an earthquake, but no prisoner escaped. The jailer was happily surprised, because he would have had to pay the fine for any and all who escaped. He knew that Paul and Silas were somehow the reason no prisoner escaped.

“Then he called for a light, and sprang in and came trembling, and fell down before Paul and Silas, and brought them out, and said, Sirs, what must I do to be saved? And they said, Believe on the Lord Jesus Christ, and thou shalt be saved, and thy house. And they spake unto him the word of the Lord, and to all that were in his house.” – Acts 16:29-32.

Their joy of the Lord in a bad situation brought lost souls to salvation.

We need to study Scripture to learn about giving thanks. Paul tells us to “Rejoice in the Lord alway: and again I say, Rejoice.” – Philippians 4:4.

It isn’t always easy to rejoice. Quite often there is trouble and grief in our life and our hearts are burdened with sorrow. I will admit that when my husband died, I was hard pressed to find anything to be thankful for. When a dark cloud of loneliness comes over me and I’m overcome with grief, that’s when I start praising God for the time Ron and I had together.

“Casting down imaginations, and every high thing that exalteth itself against the knowledge of God., and bringing into captivity every thought to the obedience of Christ;” – 2 Corinthians 10:6.

Holidays are notorious times for people becoming depressed. If you are one who is feeling empty during Thanksgiving, then Christmas, try doing what Paul did. Sing praises to the Lord for all to hear. With your whole heart, give thanks to God.

God gave us everything. He created the food we eat and gave us the love of family and friends. It’s important to thank Him; He notices when you don’t. Jesus walked through many towns during His ministry and met many people who had health troubles. He healed the deaf, blind, and lame. He raised a girl from the dead and cast out many demons. One of the worst diseases of that day was leprosy. If you had the misfortune of getting that disease, you were an outcast. You couldn’t come near a healthy person, but had to call out “Unclean” so everyone would stay away.

“And as he entered into a certain village, there met him ten men, that were lepers, which stood afar off: and they lifted up their voices, and said, Jesus, Master, have mercy on us.” – Luke 17:12-13.

Their need was great, and they knew that only Jesus could help. The truth is, all of us have great needs and only Jesus can help. We may not have leprosy, but we have sin. Only Jesus can take that sin away. We need to repent and call out to Him for mercy. He is always ready to forgive a sinner who truly comes to Him for salvation.

“And when he saw them, he said unto them, Go shew yourselves unto the priests. And it came to pass, that, as they went, they were cleansed.” – Luke 17:14.

Can you imagine the joy they felt when they saw they were healed of that dreaded disease! They should have given thanks to God who healed them, but they hurried to the priest to be declared clean.

“And one of them, when he saw that he was healed, turned back, and with aloud voice glorified God., and fell down on his face at his feet, giving him thanks: and he was a Samaritan.” – Luke 17:15-16.

Only one of the ten gave thanks to God for the healing. He wasn’t even Jewish, but a Samaritan. Did Jesus notice?

“And Jesus answering said, Were there not ten cleansed? But where are the nine? There are not found that returned to give glory to God, save this stranger.” – Luke 17:17-18.

Yes, Jesus notices when we take His blessings for granted. Take time out on Thanksgiving to turn away from football games, and thank God for the abundance of food on the table. If, like Paul, you happen to be in a prison, or homeless, God still loves you Give thanks to God. Maybe your table isn’t filled with a feast, but remember to thank God for what you do have, instead of complaining about what you don’t have. Paul travelled and spread the Gospel and there were many times when he went hungry. Some of the congregations he had established were grateful and supported him in his missionary work, and he was thankful.

“Not that I speak in respect of want: for I have learned, in whatsoever state I am, therewith to be content. I know both how to be abased, and I know how to abound: every where and in all things I am instructed both to be full and to be hungry, both to abound and to suffer need.” – Philippians 4:11-12.

Thank God for what He has given you and praise Him with all your heart.

It can seem very easy for those men who wrote Scripture under the direction of the Holy Spirit to be thankful even when life was rough. Remember, they were people just like you and me. They hurt when they were beaten, and their stomach growled when they were hungry. The difference is they were completely walking with God and served Him with their whole hearts no matter what their circumstances. I pray that I can walk closer to Him each day and show the lost world what Jesus means to me. I need to sweeten my words to others, and openly be thankful for what God has done for me. He shed His blood for my salvation. Paul gave good advice on how to take our thoughts captive and see God’s blessings through the troubles.

Turn your thoughts to the lovely things in life, and don’t dwell on the trials. Thank God for all His blessings.